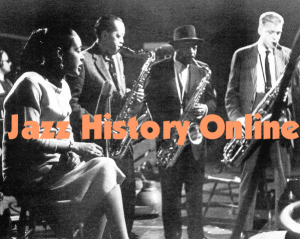 Welcome to Jazz History Online’s 10th Anniversary celebration. There haven’t been too many websites that have endured for a decade, but Jazz History Online is still going strong. I’m not sure why this should be the case, except for the sheer momentum of the work. Jazz is created in the moment, so there are always new concerts, books, CDs, and (occasionally) videos to review. We’ve covered an astonishing collection of music in our first ten years, but there is plenty of work to do. I want to continue expanding this website for the rest of my life. I consider the content on Jazz History Online to be my legacy. I have shared the story of Jazz History Online’s origins in interviews, but never on these pages. With this special edition, which brings back several of my favorite articles, I feel that the story of the site itself is a welcome addition.

While the site launched on July 19, 2011 (not coincidentally, my 50th birthday) the story of Jazz History Online goes back at least three decades. I won’t bore you with all of the details, but you should know a few basic facts. I developed and taught a semester-long jazz history class at the University of Northern Colorado, and won “Best Honors Thesis” for that project in 1989. I was already writing free-lance articles by then, and I authored several CD liner essays from 1992 onward. I wrote for several magazines and websites, but it was my connection with the Jazz Institute of Chicago’s website which developed my confidence as a writer, and a paid position as a writer and assistant editor at the now-defunct website jazz.com that made me believe that I could make a living as a jazz historian. I have always believed that music critics and historians cannot fully understand their subject without being performers themselves. After an early start on clarinet and saxophone, I became a classical and jazz vocalist, singing with choirs of various sizes over three decades. Without a doubt, my proudest moments as a chorister were the 10 ½ years I spent as a member of the Denver a cappella virtuoso choir, Kantorei. In addition to performing to acclaim in venues across North America and Western Europe, the group commissioned me to write program notes for all of their concerts and CDs.

The inspiration for Jazz History Online occurred in the wake of an important Kantorei performance. We were in Chicago in March 2011 to perform at the National Convention of the American Choral Directors Association. Right after our dress rehearsal in Orchestra Hall, four members of the choir joined me for lunch. Before I knew it, the table conversation had jumped from our upcoming concerts to my stagnant writing career. Since jazz.com went out of business 18 months earlier, I had struggled to find a new home for my work. My lunch companions insisted that I create my own opportunity by starting up my own website. Frankly, the whole idea seemed overwhelming to me: I knew a little bit of HTML code from my time at jazz.com, but nowhere near enough to create a website. Also, I didn’t know what I wanted to create: a simple blog, a full online magazine, or something in between. Still, the bug was planted.

Over the next few months, I started developing the site. I found GoDaddy’s simple Website Tonight platform and started playing with different templates and concepts. I had just picked up a promotional download of Gretchen Parlato’s album “The Lost and Found” and successfully arranged an extended meeting with her at the Wichita Jazz Festival, taking place just 6 weeks later. During that weekend in Wichita, I heard Parlato sing with Lionel Loueke and with her own band. Best of all, Gretchen spoke to me at length about her inspirations and methods. Two months later, she performed in Denver, which gave me additional opportunities to experience her unique music. I remain quite proud of the profile I created.  While I was working on that article, I found several CDs and concerts to review, and I delved into the pipe organ solos of Fats Waller, JHO’s first Historical Essay. With additional articles from Marissa Dodge and Skip Wilkins, Jazz History Online launched its first issue in the early morning hours of July 19, 2011.

At first, I tried to produce a brand-new issue every month. With daytime work and Kantorei commitments cutting into my time, that idea quickly went by the wayside. I can’t imagine that I would have continued the site for a decade under such grueling deadlines. I’ve settled into a pattern of 4-6 issues a year, and if I can find funding for additional staff, I might push back our publishing schedule to bi-monthly (every other month). Over the past decade, several writers have joined the staff—most notably, the late Amy Duncan—but at present, I write and edit everything myself.  Since its beginning, Jazz History Online has functioned as a support mechanism for the music. I have no desire to write primarily negative reviews when there are worthier items that deserve my attention and praise. I have aimed to present material in an interactive model using audio and video clips to encourage further exploration by you and your fellow readers. Further, I have tried to focus attention on lesser-known but worthy musicians, such as Frankie Newton, Clarence Gene Shaw, Jane Ira Bloom, Duchess, Anita Wardell, and Alyssa Allgood. I am particularly proud that the Swingle Singers (now known as The Swingles) offer my expanded profile as the official history of their group.

Over the years, JHO has offered special issues such as our “Women in Jazz” edition of July 2012 which featured a full complement of articles and reviews about female musicians—that may seem obvious, but one of our competitors ran a “Women in Jazz” issue that summer where half of the reviews were of male musicians! My trip to the East Coast in 2017 inspired an extended concert review essay, and a full-fledged relocation to Wilmington, Delaware in 2020. After years of struggling with the restrictions of the GoDaddy templates, our brilliant web designer and guru, Polly Washburn, created a new version of JHO on WordPress and transferred all of our existing material to the new site. This allowed us to offer all of the site’s audio/visual content to mobile users.

You’ll find many of the site’s highlights on the Front Page of this issue, including the Swingle Singers, Gretchen Parlato, and Luciana Souza profiles, as well as the historical essays on Frankie Newton, Jazz at the Philharmonic’s 1957 “Opera House” LPs, and Timme Rosenkrantz’s 1944 Town Hall Concert. You can watch the complete 1957 TV program “The Sound of Jazz” with an accompanying essay on its backstory, and learn about Camille Bertault who used a series of YouTube videos to jumpstart her career. The wonderful vocal trio Duchess has been part of Jazz History Online since its inception in 2013; the rollicking interview we had with the members one Sunday evening was unforgettable. Full audio recordings accompany articles on the early history of “Body and Soul”, Dave Brubeck’s astonishing “Koto Song” and a profile of the exciting vocalist Anita Wardell. There are insights into a long-forgotten edited chorus from a classic Paul Desmond solo, and an examination within the roots of one of jazz’s oldest songs.  I’ve also included a few favorite CD and Retro Reviews, including a piece on the first jazz album I ever loved: the 1958 Playboy Jazz All-Stars. We remembered a late colleague in JHO’s memorial for Amy Duncan, comprised of interviews and memories from Amy, her friends, and family. All of the articles appear in their original form, except for the piece on Clarence Gene Shaw, which was updated after Mr. Shaw’s widow and grandson reached out to me with memories of the trumpeter’s final years. And if your favorite JHO article isn’t in our “Best of” list, that’s OK: feel free to search our archive and revisit some of your own JHO highlights.

The one new item on this issue is our ongoing concert diary feature. I’ve covered several performances since concerts resumed last May, and there are many more coming this summer. All of the reviews appear in this feature (scroll down for earlier entries.) In the first week of September, I will be in Chicago to cover that city’s thriving local jazz scene, which will be the subject of a full review essay. We will have a new issue coming out in September as well, with more book, CD, and video reviews. Our newest profile (which has been in process for nearly two years due to COVID) will appear on this site by the end of the year. If you are a fan of vocal groups, I guarantee that you will be happily surprised by the subject!

All comments can be directed to me at jazzhistoryonline@nulllive.com. Donations of any amount may be made through the donation portal on this site or through paypal.me/jazzhistoryonline  (Patreon will be available soon). Advertisements for music-related products or services are always welcome (and our prices are very reasonable!). Please contact me at tomsjazz@nullmsn.com for a rate sheet and specifics. Join our Facebook page at facebook.com/JazzHistoryOnline/. To be sure you get our Facebook messages, hover over the “liked” button on our Facebook page, and click the top two selections (“Get Notifications” and “Following”). If you’d like a monthly e-mail update of new articles (no, we won’t sell your addresses to anyone else) please send your name and e-mail address to jazzhistoryonline@nullgmail.com.

Thanks to all of you for your continued support. With any luck, we’ll still be around to celebrate the 15th, 20th, and maybe even the 25th anniversary of this site.