Tubby Hayes: “A Man in a Hurry” (Mono Media/Treatment/Proper) 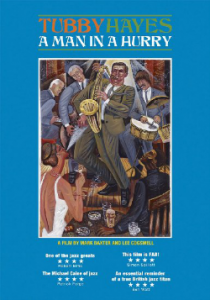 Call it the Tubby trifecta. 2015 marks the 80th anniversary of Tubby Hayes’ birth, and we’ve seen a rush of CD reissues followed by a long-awaited Hayes biography by Simon Spillett, and now a superbly-crafted documentary on the British tenor giant. Hayes only lived to the age of 38, but he packed in an enormous amount of life and music within that short period. That seems to be the rationale for the documentary’s title: “A Man in a Hurry”.

True to its title, the film by writer Mark Baxter and director Lee Cogswell takes a speedy pace through Hayes’ life and career, covering it all in just under an hour. Narrator Martin Freeman and Spillett keep Tubby’s story moving along with pertinent historical information (and in Spillett’s case, enlightened observations) but the breadth of Hayes’ fan base can be seen through the wide range of interviewees within the film. In addition to the usual family and colleagues, there are comments from a retail clothier, a poet, a pop artist, an author, and a broadcaster/journalist. This diverse group of experts brings the story into some interesting areas, including the intersection of British modern jazz with fashion. It is probably the only jazz documentary where the name of Michael Caine is invoked on three different occasions!

Most of the discussion focuses on Hayes’ music and eventually, some of his questionable personal habits. Like Charlie Parker, Hayes had a large appetite for everything, especially food, drink and drugs. The latter is covered in considerable depth, with Michael Horovitz providing a graphic story about one incident, Robert Elms noting that Hayes probably fell for the myth that musicians who wanted to play like Parker had to do the same drugs (somehow, I give Hayes a little more credit than that), and Simon Wells and Spillett recounting the police bust that led to his (supposed) cure. The combination of substance abuse and serious medical problems caused Hayes’ early death and Spillett correctly remarks that Hayes’ passing caused a gap in British jazz that was never sealed.

The biographical side of the film covers his story reasonably well, but there are very few opportunities to hear Hayes at work. The famous film of the Hayes big band on “Jazz 625”—looking and sounding better than I’ve ever seen it—covers several of the musical examples, but we only hear a few bars at a time before another interview takes over the soundtrack. The examples are well-chosen with one exception—the section of “In the Night” played right after an interviewee notes the song’s John Coltrane influence actually sounds nothing like Coltrane; instead of using the theme, the filmmakers might have included a portion of Hayes’ flute solo which indeed shows a Coltrane influence. While the film appears to have been made for a British audience, American viewers will have few issues understanding the documentary (there are isolated references to “jumpers”, weight measured in stones, and a few musicians who are not well-known on this side of the pond).

Tubby Hayes was not just the UK’s most revered modern jazz musician, he was also one of the greatest international players of all time. He was the first major British soloist to work in the US, and while he proved that he was capable of working alongside artists like Clark Terry, James Moody, Eddie Costa and Roland Kirk, American audiences never really had the opportunity to hear Hayes’ most adventurous music. The US jazz fans who remember Hayes at all tend to think of him as a hard bopper in the tradition of Sonny Rollins, John Coltrane and Hank Mobley. Thankfully, “A Man in a Hurry” takes the time to discuss Hayes’ breakthrough into free and modal jazz, the 1967 album “Mexican Green”. That album was never widely available in the US, but it holds significant interest as a milepost in Hayes’ later music. In addition to having excerpts from the album, the film also includes interviews with Hayes’ drummer on that album, Spike Wells.

American fans will have one further obstacle: this DVD is presented in the British TV standard PAL, which means that the disc will not play in American DVD players. It will play on computers, and on region-free multi-standard DVD players (the latter can be found at Amazon for very reasonable prices; it’s a good investment for anyone interested in collecting videos from other countries). “A Man in a Hurry” is presented in enhanced 16 x 9 widescreen with a very clean stereo soundtrack. No captions are included, which would have been especially helpful on the disc’s sole bonus feature, an interview with filmmakers Mark Baxter and Lee Cogswell. Baxter has a deep voice and a very thick British accent, which makes him a little hard to understand at times. He also peppers his comments with several English idioms that might be hard for Americans to decipher. However, there is one point that Baxter makes very clear: he hopes that his film will bring Tubby Hayes’ name and music to a larger audience. With its thorough, swift and entertaining treatment of Hayes’ life and career, “A Man in a Hurry” should do just that.