Billie Holiday: The Musician and The Myth (by John Szwed) 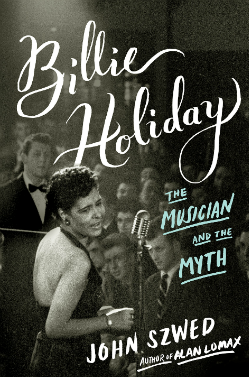 Billie Holiday did not make things easily for modern jazz scholars. Her 44 years on Earth were filled with all kinds of nefarious activities, including prostitution, rape, child labor and substance abuse, some of which—but not all—was beyond her control. Yet she also left behind a remarkable collection of recordings which redefined the parameters of popular singing and defined a new breed of vocalist: the jazz singer. Holiday consistently created links between the songs she sang and her troubled life. Her willingness to transform herself into a modern-day martyr turns up repeatedly in her autobiography, “Lady Sings the Blues”, starting with the book’s infamous opening lines, Mom and Pop were just a couple of kids when they got married. He was eighteen, she was seventeen and I was three. The book’s sensational prose and loose interpretation of the facts have led most researchers to dismiss it out of hand as a hack job written for quick cash. In his new study “Billie Holiday: The Musician and the Myth” (Viking), author John Szwed investigates and clarifies the back story of “Lady Sings the Blues” and attempts to separate Holiday’s musical triumphs from her dysfunctional life.

In an unusual approach, Szwed opens his text by discussing Holiday’s autobiography. The chapters about “Lady Sings the Blues” are well-written and fully developed. Szwed exonerates Holiday’s co-author William Dufty, noting his significant experience as a newspaper writer and editor. He also quotes Dufty’s letters and articles which tried to set the record straight about the book and the nature of the collaboration with Holiday. Szwed posits that the biggest problems came from Holiday’s longtime friends (including Tallulah Bankhead) who threatened legal action if they were even mentioned in Holiday’s book. Szwed also lays some of the blame at Holiday’s feet, noting that her no-holds-barred approach likely alienated many of those friends, who were unwilling to let certain skeletons out of the closet. Certainly Szwed’s impeccable research calls for a re-evaluation of Holiday’s book, and as other commentators have noted, perhaps it is time for an unexpurgated edition of “Lady Sings the Blues” with Dufty’s clarifications as an appendix.

After such a strong start, the second half of the book—which deals with Holiday’s music—is uneven, sketchy and utterly disappointing. Holiday’s recordings are not discussed in a comprehensive manner; instead, Szwed cherry-picks a few titles, offers summary descriptions, and moves on, frequently leaving out other important recordings in the process. With the exceptions of Holiday’s “Lady Sings the Blues” Carnegie Hall concert, and the three airchecks with the Count Basie band, there are no discussions of any live Holiday recordings. Her sessions for Norman Granz are given short shrift, and  Szwed focuses most of his time on the negative aspects of Holiday’s final two albums, “Lady in Satin” and “Last Recordings“—both with the Ray Ellis orchestra—rather than appreciating Holiday’s remarkable interpretive powers. When examining Holiday’s filmed performances, Szwed rightly points out Holiday’s sublime version of “Fine and Mellow” from “The Sound of Jazz”, but completely neglects her appearances on Art Ford’s “Jazz Party”. Szwed mentions the mutual admiration between Holiday and Jo Stafford, but a comparison of the two singers’ styles loses direction and abruptly breaks off. The book ends with a brief anecdote that supposedly occurred while Holiday was in the hospital on her death bed. There’s no attempt at a formal conclusion to the narrative, nor any discussion of Holiday’s legacy.

The strength of the “Lady Sings the Blues” chapters reveal that Szwed is a thorough and incisive researcher, but the unevenness of the music section makes it appear that Szwed is unable to make simple factual connections. In a chapter devoted to Holiday’s influences, Szwed writes for several pages about coon songs, and just when the reader is wondering about the relevance of this topic to Holiday, Szwed brings out the example of Eva Tanguay, a French Canadian coon singer whose musical accomplishments were matched to a notorious—and well-publicized—personal life. All well and good, but did Holiday even know about Tanguay? Szwed doesn’t even speculate. Later, Szwed makes a brilliant comparison between singing and Method acting, noting that both vocalists and actors draw from their own experiences to create their unique interpretations. Yet even after quoting Holiday at length about how she preferred songs that related to her personal life, Szwed seems unwilling to connect certain songs (such as “My Man”) to the events in her autobiography. Szwed is quite lucid when discussing Holiday’s habit of singing far behind the beat and miraculously catching up to the band by the end of each phrase. In non-musical terms and clear verbal descriptions, he shows how and where Holiday brought herself back in sync with the rhythm section on her classic recording of “Fooling Myself”. He also includes an example of Holiday’s behind-the-beat phrasing in musical notation (this time on a recording of “What is This Thing Called Love?”) but curiously, there is no discussion of this illustration in the text. In several places, Szwed floats the idea that Holiday could change the meaning of a song through her delivery alone, but he neglects to mention it while discussing Holiday’s most famous example of the process: the sexual role-reversal on “What a Little Moonlight Can Do” (for more on this aspect of “What a Little Moonlight”, see my Sidetracks article here).

In the introduction, Szwed states that his book is not a biography, but it certainly reads like a set of notes for one. Whether Szwed abandoned a Holiday biography, is still working on one, or never intended to write one in the first place, what remains in “Billie Holiday: The Musician and the Myth” is the blueprint for a first-class Holiday biography. The inconsistencies could be corrected with little effort  (which makes me wonder why they weren’t fixed for this edition), and if Szwed could focus his energy on Holiday’s music as he clearly has on her memoirs, we could all learn a great deal about Billie Holiday. She may not have made it easy for later writers to tell her story, but many of the clues are still extant and they should be re-examined.