Why Jazz Happened (by Marc Myers) 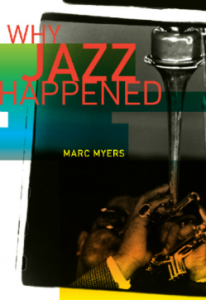 If you’ve been watching the new “Cosmos” series hosted by Neil DeGrasse Tyson, you’ve noticed that the secrets of our existence can be found by examining tangentially related items. For example, in a recent episode, DeGrasse Tyson told of a scientist who discovered the true age of the Earth only after examining the amount of lead in a meteorite. The same methodology can be found in Marc Myers’ book “Why Jazz Happened” (University of California). Within a tightly organized 225-page monograph, Myers explores how social and technological changes influenced the direction of jazz history. While Myers’ primary focus is on the years 1945-1972, his narrative reaches all the way back to the first recording sessions of the Original Dixieland Jazz Band, and moves forward to the present day.

Myers’ thesis is an intriguing one, and while many of his topics have been covered by other authors, Myers gives them extensive and thorough treatments. He is particularly well-versed in the inner machinations of the music business, and he deftly illustrates the specific reasons why classical music was first issued on 12-inch LPs, while pop was distributed on 10-inch discs (the motives are primarily financial—big surprise—but Myers explores the royalty compromise that made it possible for all types of music to be issued on the larger discs.) He profiles the opportunistic independent labels that recorded jazz in the early years of bebop, and explains the emergence and importance of publishing administrator BMI. Myers also discusses the impact of the G.I. Bill and the post-war housing boom on young aspiring California musicians. Few authors have ever explained the connection of suburban lifestyles and the emergence of cool jazz as well as Myers. In the latter chapters of the book, Myers makes the necessary shift from the technological and social influences on jazz to the musical influences, specifically the rock music of the late 1960s and early 1970s. Myers clearly knows this period of rock very well, and had this material been expanded, it might have made a fascinating book as well.

Myers’ jazz knowledge is also solid, if a little too intricate. In the introduction, Myers splits post-war jazz into ten separate styles! (I’m afraid I still don’t recognize a difference between spiritual jazz and hard bop, nor jazz-pop vs. jazz-rock fusion.) And even with this extreme categorization, he misses two important sub-categories: California bop of the late fifties and early sixties (which was much more compositionally-oriented than its East Coast counterpart) and progressive jazz of the mid-to-late sixties (as recorded on Blue Note and played by the second Miles Davis Quintet). Because Myers insists on separating the British Invasion and civil rights movements into separate chapters, he misses the opportunity to discuss key albums like Art Blakey’s “Free For All”, Miles Davis’ “My Funny Valentine” and Eric Dolphy’s “Out To Lunch”, all recorded in the volatile month of February 1964, when the Beatles first appeared on the Ed Sullivan show and racial tensions reached a new height. None of these albums garner a mention in Myers’ text, nor does the seminal Charlie Haden “Liberation Music Orchestra” of 1969.  Also, Myers’ text repeats itself endlessly: in an otherwise well-written account of the beginnings of the AACM, there are at least 4 separate quotes—in as many pages—stating that the group was not interested in creating protest music. Part of the problem is Myers’ organizational style, which offers a condensed version of a chapter’s themes before explaining them in depth. This concept is fine for web articles where readers typically change pages before reaching the end of a story, but not in a book where the reader’s undivided attention is better assured.

Myers is best-known as an internet writer, of course. His Jazz Wax is one of the best daily jazz websites, and he also writes for the print and internet editions of the Wall Street Journal. While “Why Jazz Happened” has its flaws, it is loaded with important details about the climate in which jazz developed, and as such, his book is an important reference for future researchers. I suppose that Myers’ thesis would work better if jazz history maintained tightly enclosed little categories. But as we all know, jazz does exactly the opposite, confounding all of us who try to define, explain or otherwise control it. Unlike light waves, jazz history rarely travels in a straight line.