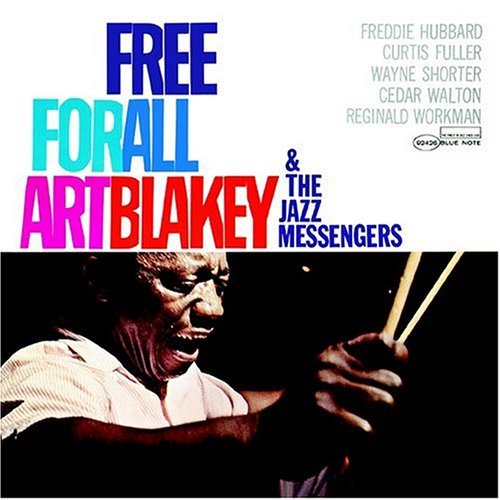 Of the several dozen studio albums recorded by Art Blakey and the Jazz Messengers, none possess the sheer power and ferocious intensity of “Free for All”. Recorded on February 10, 1964, it marked the Messengers first recording for Blue Note in nearly two years, and its palpable energy made this studio recording sound like a live date. Nat Hentoff’s original liner notes state that on the evening of the recording, “Blakey was in a more galvanized state than…on any of his previous Blue Note dates” and that Blakey’s energy inspired the rest of the band. Yet Hentoff never says what events—private or public—triggered those emotions.

February 1964 was a turbulent time. In the first week alone, there was a boycott of New York City’s public schools by black and Puerto Rican students because of alleged de facto segregation; the trial of the accused murderer of civil rights leader Medgar Evers ended in a mistrial when the all-white Mississippi jury was unable to reach a verdict; and on the night before the “Free For All” recording session, the Beatles made their first live appearance on “The Ed Sullivan Show”. The well-known image of screaming teenage girls in Sullivan’s audience made it clear that the Beatles were about to change the landscape of the music scene.

However, much of the Messengers’ ongoing inspiration came from John Coltrane, whose marathon performances were generating previously unheard levels of intensity, and whose modal improvisations offered no sense of harmonic resolution. Blakey’s sidemen were writing tunes with delayed harmonic resolutions, and two of those compositions were the first pieces recorded for “Free for All”. Except for Wayne Shorter, every member of the Messengers (Freddie Hubbard, Curtis Fuller, Cedar Walton, Reggie Workman and Blakey) had recorded with Coltrane, and Shorter was considered one of Coltrane’s greatest disciples (a reputation that peaked that summer with Shorter’s Blue Note album “Juju”, featuring Coltrane sidemen McCoy Tyner, Workman and Elvin Jones).

Regardless of which events prompted the explosive music on “Free for All”, Blakey and the Messengers seemed determined to display the emotional and artistic validity of their music, as well as a strong commitment to the civil rights movement. The session opened with “The Core”, which Hubbard dedicated to the Congress for Racial Equality, a group in the news for their efforts in registering black voters in the Deep South. The fiery horn solos are backed by Blakey’s kinetic cross-rhythms and Walton’s Tyner-influenced comping. The horn backgrounds inserted at key moments only increase the intensity. Engineer Rudy Van Gelder must have been surprised at the sheer volume coming from the studio floor, for the recording has an unusually high amount of distortion on the horn and drum mikes. “Hammerhead” is equally aggressive, and Blakey’s beat seems designed to reinterpret “The Blues March” for a new age. With the recording levels readjusted, the balance is clearer between the rhythm section and the horns, and we can hear Blakey vocally encouraging the soloists. Blakey’s exhortations inspire the soloists, raise the overall intensity, and introduce a unique character to the album.

With half of the new album finished, the drummer’s cousin, singer Wellington Blakey joined the group for versions of “My Funny Valentine” and “Soul Lady”. By 1964, Wellington’s checkered career in R&B groups had yielded very few recordings. His style was reminiscent of Roy Milton, and Lion and Wolff may have considered issuing a 45 rpm single of Wellington’s tracks. Instead, the tracks were rejected and never issued.  Wellington was back with the Messengers ten days later, when they recorded their Riverside LP, “Kyoto”, and this time “Wellington’s Blues” made it onto the album. This bland, undistinguished title may have been Wellington’s final recording. After Wellington’s spot, the Messengers recorded “Eva”, a ballad they had recorded at Birdland for the Riverside album, “Ugetsu”, but which had been left off the LP. Blue Note rejected the studio version, probably because the piece that followed it was lyrical enough to balance the album. That piece was Clare Fischer’s “Pensativa”, certainly the most-covered piece of all the tracks on “Free for All”. Hubbard heard the piece during a gig on Long Island and was so captivated by the melody that he brought it into the Messengers’ book. The piece is ostensibly a bossa nova, but Blakey avoids the traditional samba beat and plays a deliciously loose and swinging Latin groove. Hubbard and Fuller share Fischer’s glorious melody, and Hubbard’s solo is one of his all-time best, balancing abstract length phrases and unadulterated lyricism. Shorter is more melodic here than anywhere else on the album, and Walton sparkles through his beautifully-crafted solo. Although Hubbard recorded an extended version of “Pensativa” on the 1965 Blue Note album, “The Night of the Cookers”, it is the rendition on “Free for All” that remains the undisputed classic.

The title track (which opens the album) was actually the last tune recorded at the session. The Messengers were ready to wail again, and the intensity on this track actually exceeded their work from earlier in the evening. Shorter’s explosive solo is fueled by Blakey’s astonishing polyrhythms, and an unsuspecting listener to this excerpt might mistake the players for Coltrane and Elvin Jones. Fuller is up next with a forceful statement that builds tension with its precise rhythms and emphasis on a central pitch. Hubbard’s solo is rhythmically complex, and he is in perfect synch with the cross-rhythms played by the rhythm section. Blakey roars into his only solo spot on the album, creating a sound that is remarkably dense, even for him.

“Free for All” represents the artistic zenith of the Messengers with Hubbard, Fuller and Shorter. The aforementioned “Kyoto” would be their last album together as a sextet. By April, when the Messengers recorded their next Blue Note album “Indestructible”, Lee Morgan was back in the trumpet chair. Most of the musicians did occasional recordings as leaders and free-lancers, but Shorter’s tenure with Miles Davis would begin a new direction in his musical development. Blakey continued to find new young players until he passed in 1990, but while many of his later recordings were very exciting, few of them captured the overwhelming energy as well as those captured in the grooves of “Free for All”.