What A Wonderful World (by Ricky Riccardi) 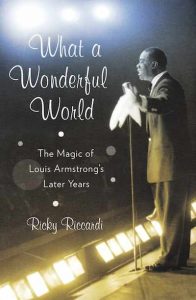 In the second half of his life, Louis Armstrong created a large collection of privately-recorded open reel tapes. He recorded his own concerts, conversations with friends, autobiographical monologues (including readings of his own letters), and commercially-issued records of himself and others. Armstrong had a pair of tape decks installed in a steamer trunk, and he would bring them and a collection of tapes with him for listening while on the road. When at home, he cataloged the tapes and hand-decorated the boxes with original collages. Although historians and fans knew about Armstrong’s tape collection while the trumpeter was still alive, the contents of the tapes were undisclosed until several years after Armstrong’s death. In his new biography, “What a Wonderful World”, Ricky Riccardi draws on these tapes to present a portrait of Armstrong far removed from his public persona. Starting his narrative in 1947 with the birth of the All-Stars, and closing with the renewed, posthumous interest in Armstrong, Riccardi attempts to offer a revised, detailed look at Armstrong’s twilight years.

To the general public, Louis Armstrong was a genial, old-fashioned entertainer who loved to sing and play trumpet for large enthusiastic audiences. Only a modest percentage of those fans realized that years earlier, Armstrong was the primary artistic force in transforming jazz from an ensemble music to a soloist’s art. Armstrong knew the measure of his contributions and was respectful to those who recognized his genius. But the nature of Armstrong’s music led him to be a popular entertainer, and Armstrong was bitter and angry towards those who treated him like a second-class citizen because of his skin color or their own ignorance of his artistic importance. He bristled when a call boy on a movie set referred to his white co-stars with courtesy titles and last names (Mr. Gilbert, Ms. Caron, etc.) but who called Armstrong by a nickname and joked that if “Satchmo” didn’t come out right away, the studio would hire Harry James in his place. Armstrong took his complaint to the film’s producer and refused to appear until the situation was rectified. The producer made things right, but Armstrong’s recorded account (included in Riccardi’s book, complete with graphic language and racial epithets) was kept secret until after Armstrong’s death.

Because of his stage persona, Armstrong was labeled an Uncle Tom by the younger generation. Riccardi’s book shows that the accusations were unjust, and that Armstrong was deeply affected by racial issues. He did not march in civil rights protests for fear that a punch to his lips might end his career, and while Armstrong reportedly gave generous financial support to the civil rights cause, his actions were sometimes behind the times. He hired white musicians on a regular basis, and refused to play in his hometown of New Orleans for several years because of a city ordinance that forbad stage performances by mixed-race bands. Yet Armstrong played for segregated audiences into the early sixties, long after mandatory integration clauses were a regular part of black musician’s contracts. Armstrong’s theme song “When It’s Sleepy Time Down South” was written by two black composers, and the trumpeter was outraged at the backlash from his 1951 recording, which included the original lyrics about mammies and darkies. Unfortunately, that scandal may have led Armstrong’s detractors to dismiss the trumpeter’s later actions including his furious tirade on President Eisenhower’s inaction during the Little Rock integration crisis, and his statements in the aftermath of the march on Selma, Alabama.

Armstrong’s manager, Joe Glaser, was a rough, crude white man with numerous criminal connections. Riccardi’s portrait of him is as fair as possible, since much of the relationship between Glaser and Armstrong was purposefully undocumented. For example, in 1954, Armstrong’s wife Lucille was arrested in Hawaii for possession of marijuana. Louis was a well-known pot smoker, and Riccardi quotes a vehement letter from Armstrong to Glaser where the trumpeter demands that Glaser shield Armstrong and his wife from further marijuana persecutions, or else Armstrong would retire immediately. Riccardi notes that there is no record of Glaser’s response, but recognizes that Armstrong was never busted for marijuana use again. Riccardi reinforces the notion that Glaser knew that Armstrong was his best client and fought rigorously on Armstrong’s behalf. He also places equal blame for Armstrong’s back-breaking schedule of one-nighters between Armstrong and Glaser. Riccardi shows Armstrong as a tough and stubborn bandleader, working long tours and making few changes to the nightly repertoire. Despite the complaints of his musicians and critics, Armstrong entertained in the best (and perhaps only) way he knew how, and he failed to make changes to his act unless he was personally affected. Three of his most talented musicians (Velma Middleton, Billy Kyle and Buster Bailey) died during tours, but it took a pair of heart attacks of his own before Armstrong would reduce his touring schedule.

For all of Riccardi’s strengths in documenting Armstrong’s later life, he is significantly weaker when discussing Armstrong’s music. His musical discussions are littered with superlatives, and while some of Armstrong’s recordings have been unduly neglected, it becomes difficult for the reader to discern just which recordings are truly definitive. In discussing Armstrong’s 1947 Boston Symphony Hall concert, Riccardi claims that the version of “Muskrat Ramble” is “arguably the greatest version…ever recorded” without offering any further reasoning or justification. While I agree that Armstrong’s version is very good, I cannot claim to have heard the majority of the 794 other versions listed in Tom Lord’s online discography, and unless Riccardi can claim otherwise, he has no right to include such an extravagant assertion. I’m more troubled by his citation of Armstrong’s “hilarious” added lyrics to “St. Louis Blues” from the W.C. Handy album. The lyrics, where Armstrong says he’ll beat Velma Middleton’s head with part of a picket fence, may have inspired laughter in 1954, but it is very disturbing to modern ears. Regardless of its original intentions, Riccardi should note the cultural disconnect in his discussion.

Except for isolated spots of sloppy editing, Riccardi’s text reads very well. Not surprisingly, Dan Morgenstern, who shares Riccardi’s advocacy of all things Armstrong, is quoted frequently in the book, as are several former Armstrong sidemen. While the unrelenting jingoism gets a little tiring, the strength of Riccardi’s research makes “What a Wonderful World” an essential addition to the Armstrong canon.