The Jam Session: A Vocalist’s Confession

With this edition of “Sidetracks”, we introduce you to our newest writer, Nicky Schrire (pictured at right). Nicky is a progressive jazz vocalist originally from 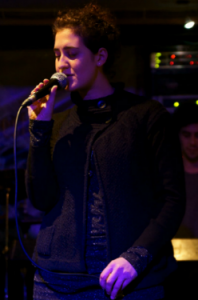 I’ve always had mixed feelings about jam sessions. I typically attend a session, leave feeling the experience was average, forget about these feelings, and find myself months down the line thinking, “Perhaps I’ll give it another go. After all, I must be missing out on something since all my peers love these jazz gatherings.” It was with this optimism that I dragged myself off to a jam session hosted by a reputable New York City jazz club a couple months ago. I thought, despite having participated in many a disappointing jam session before, the experience of attending a “Singers’ Only Jam Session” might help refocus and re-energize me. I should have known better.

To some, the idea of a jam session solely for singers might seem odd. Those who think vocalists have no place at a rip-roaring event of instrumental prowess might breathe a sigh of relief at the notion. Keep the singers separate and the occasion will prove more enjoyable for all involved. While I’m hugely critical of this belief, I also understand it. Jam sessions typically comprise a rhythm section and a couple of horn players, tearing through standard after standard, rotating players and offering everyone a chance to play a solo on the tune’s harmonic progression. Why wouldn’t this be an inviting platform for vocalists? Well, most singers do not sing standards in their original keys. The songs need to be transposed. And while the vast majority of instrumentalists can transpose on the spot or play standards in all twelve keys, there’s no question that it takes more effort. It’s simply not as seamless. Add to that the stereotypical vocalist who cannot count the band in clearly, doesn’t follow the song’s form, and improvises despite having spent far too little time learning chords and scales, and you’re left with a host of rolling eyes and highly annoyed instrumentalists.

It’s also worth considering the mere nature of the voice as an instrument and how it differs from its instrumental counterparts. There are things that the voice simply cannot do. Sure, vocalists can improvise at breakneck speed, scaling octaves, leaving stunned listeners in their wake. But the pitch accuracy of even the most in tune voice is never going to yield the same clean, finite results as the piano with its percussive, direct tone, or even a saxophone where being slightly below pitch doesn’t create the melodic ambiguity to the degree that a flat voice does.

You may well ask, what does it matter? Surely a jam session is about the coming together of musicians and the celebration of jazz as a common language? It’s not about how fast nor how high one plays. The optimist who naively nestles in the back of my mind asked these very same questions and convinced me to give the session a chance. Almost as an act of defiance (quite futile, really, since no one was forcing me to partake in the session) I decided to sing a ballad. I chose Vincent Youmans and Irving Caesar’s “Tea For Two” whose sexist lyrics almost mirror the oppression of a “singers only” jam session. Oh, the irony. I decided to sing the song incredibly slowly and, instead of using scat syllables to improvise, to sing two heads upfront, using the second head as a vehicle for melodic embellishment. And to think I’ve been accused of over thinking things!

The very competent rhythm section assumed I wanted a swung ballad and, upon hearing my opening phrase exhibiting even eighth notes, the guitarist said, bemused, “Oh, that’s what you want.” I immediately felt I was being misjudged which in turn made me annoyed and happily challenged. I liked the feeling of being underestimated knowing the bar had been set and I could rise above it. However, I was annoyed because I was so clearly being prematurely assessed and lumped together with all other vocalists. Being judged has never before created such a dichotomy of feelings!

Armed with my plan of being understated and deliberately not falling into the “fast and belting” singer trap, I finished my song and garnered respectful looks and murmurs from the rhythm section. Some of my fellow singers offered up kind words while others merely eyed me up and down, smiling coolly. To be honest, I didn’t actually mind whether or not other singers responded generously. I didn’t really care whether the band liked my singing. I participated in the jam session to test myself, I wanted to find out if it was fun to sing with musicians I didn’t know, in front of an audience comprising other singers/musicians, and to see if I could control my own ego and consciously make choices that forced me to approach this session with a more thoughtful, calm (dare I say more mature?!) mindset. But, simply in writing this and analyzing my actions I realize there was huge ego involved in merely choosing to be contrary. I blame it all on the jam session?

Jam sessions are a far more brutal platform for superficial, harsh judgment than concert settings or other performance contexts. Ego has worked its lowly way into the jam session. Is it because the nature of back-to-back solos means you’re pitted against your peers? Or perhaps it’s the expectation of the audience, made up of both jazz aficionados and fellow musicians who are itching to get up on the bandstand to show everyone “what they’ve got”? Of course this isn’t everyone’s reason for attending a session, but for some it’s their only motivation.

I left that jam session feeling largely unfulfilled and unmoved by the experience. I was neither joyous nor unhappy. Maybe my expectations were askew. Maybe my present penchant for more contemporary jazz and music in general means I’m not currently satisfied singing nor listening to standard jazz repertoire sung in stock fashion (which is a necessary requirement for a jam session-unless you bring a chart…in which case I will be the one judging you harshly!).

I also realized that it would have been far more fun playing with musicians I did know. Those whose support and knowledge of my strengths and weaknesses aided in creating a familiar environment where we could all take musical risks and say something concise and interesting, as opposed to floundering under duress and overcompensating with sheets of sixteenth notes. I know all too well that there are some wonderful sessions out there. I’m not denouncing them all. I’ve been fortunate to witness musicians coming together and communicating sensitively and fluently, speaking the same language but never having met before. It’s thrilling to see and it’s a trait specific to jazz that is incredibly special.

But I suspect, and this may be hugely presumptuous, that I’m voicing thoughts and criticism that many musicians, both instrumentalists and vocalists, share. If these complaints are indeed common, my suggestion would be that we pledge to play only ballads, in even eighth tempos, from here on out and bid farewell to ego-laced runaway solos…but I also sense I may be the only naively optimistic soul at the next “singer only” jam session, stubbornly digging her heels in and singing “Round Midnight” at a snail’s pace.