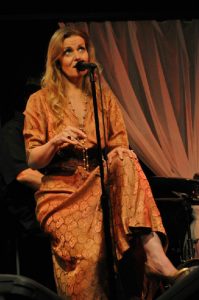 In a musical ensemble, there is no substitute for longevity. The longer a group plays together, the greater their understanding of their fellow musicians. In a subconscious way, musicians who work together for extended periods discover how the other musicians work, how they breathe, their habits (both good and bad), and most importantly, how to make their own contributions fit into the group sound. Nearly every musical genre has abundant examples of long-standing ensembles: the Juilliard String Quartet, the Netherlands Wind Ensemble, the choirs Conspirare and Chanticleer, the Duke Ellington Orchestra, the Oscar Peterson Trio. One of the best current jazz examples is the Tierney Sutton Band. They have been together for nearly 20 years, and they operate as a true 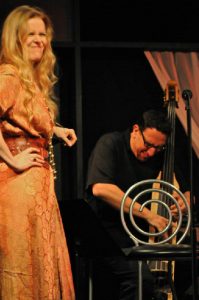 cooperative, collaborating on all aspects of the group’s work from the arrangements to the selection of gigs. They’ve played annual performances at Dazzle for the past several years and on their latest engagement (May 5-6), they displayed extraordinary musical communication, both within the group and to the audience.

The arrangements are the key to the Sutton Band’s excellence. They have over 200 charts in their band book, and many of them have tricky extensions of form, unexpected changes of style and meter, or juxtapositions of other songs. Sutton told the audience that they never play the same show twice, and even when they pull out an arrangement that they haven’t played in a few years, it’s rare to see any of the members playing from the sheet music. That’s because they breathe this music, so much that they can maneuver through these intricate settings and usually surprise the audience more than themselves. Yet, the charts offer plenty of room for new ideas and unique interpretations. For example, on “Devil May Care”, which the band recorded at Birdland, was taken in a completely different direction when played at Dazzle, including a new introduction pitting Sutton’s voice against Ray Brinker’s drums. And naturally, the nature of the improvised solos changes from night to night; when pianist Christian Jacob added a song quote to his solo on “Between the 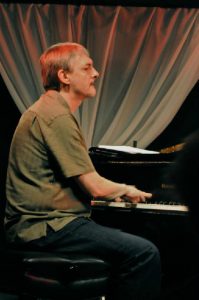 Devil and the Deep Blue Sea”, Sutton feigned concern, mouthing to the audience, “he never quotes!”

Sutton is an exquisite vocalist with a special gift for finding the meaning of the lyric. She sang an ultra-slow duet with Jacob on “Tenderly” that revealed the rich imagery of the words, and made us all wonder why the tune was ever performed at a faster tempo. And on “My Man’s Gone Now”, Sutton’s intense performance reflected the deep sense of loss that made the aria the dramatic highpoint of “Porgy and Bess”. While Sutton admitted that were a lot of dark arrangements in her book, she was equally adept at lighter material, firing out complex lyrics and brilliant scat on up-tempo pieces like “Cheek to Cheek”, “Love Me or Leave Me” and “It’s All Right With Me”. Jacob is an excellent accompanist, especially on ballads like “Haunted Heart” and “Beautiful Love”, but like Sutton, when the tempo goes up, he is a dazzling improviser, with exciting lines and jabbing chords. Bassist Kevin Axt and drummer Ray Brinker is also superb soloists, but what truly amazed me was their subtle gradations of various grooves. As I was 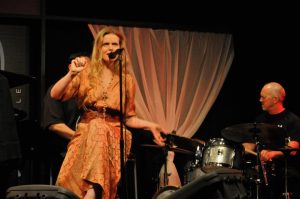 listening, I found myself writing the word “funk” several times; yet, not one of those funk grooves was the same as the others—one had sharply defined bass double-stops, while another used an intricate hi-hat pattern played with brushes(!). When I asked Axt and Brinker about it between sets, they said that they based their ideas on what was right for the song.

The Tierney Sutton Band’s album “American Road” was nominated for a Grammy this year (you can read Ellen Johnson’s review here), and the group was also nominated for their arrangement of “On Broadway”. Over Sunday’s two sets, they performed nearly all of the songs from the album, which includes several folk songs and hymns, as well as three songs from “Porgy and Bess”. The band is taking a couple of weeks off before playing gigs in California and New York, If you can go hear this band in person, by all means, do so. In the meantime, be sure to get a copy of “American Road”. It’s a trip well worth your time.

Many thanks to Susan Gatschet-Reese for her wonderful photographs!