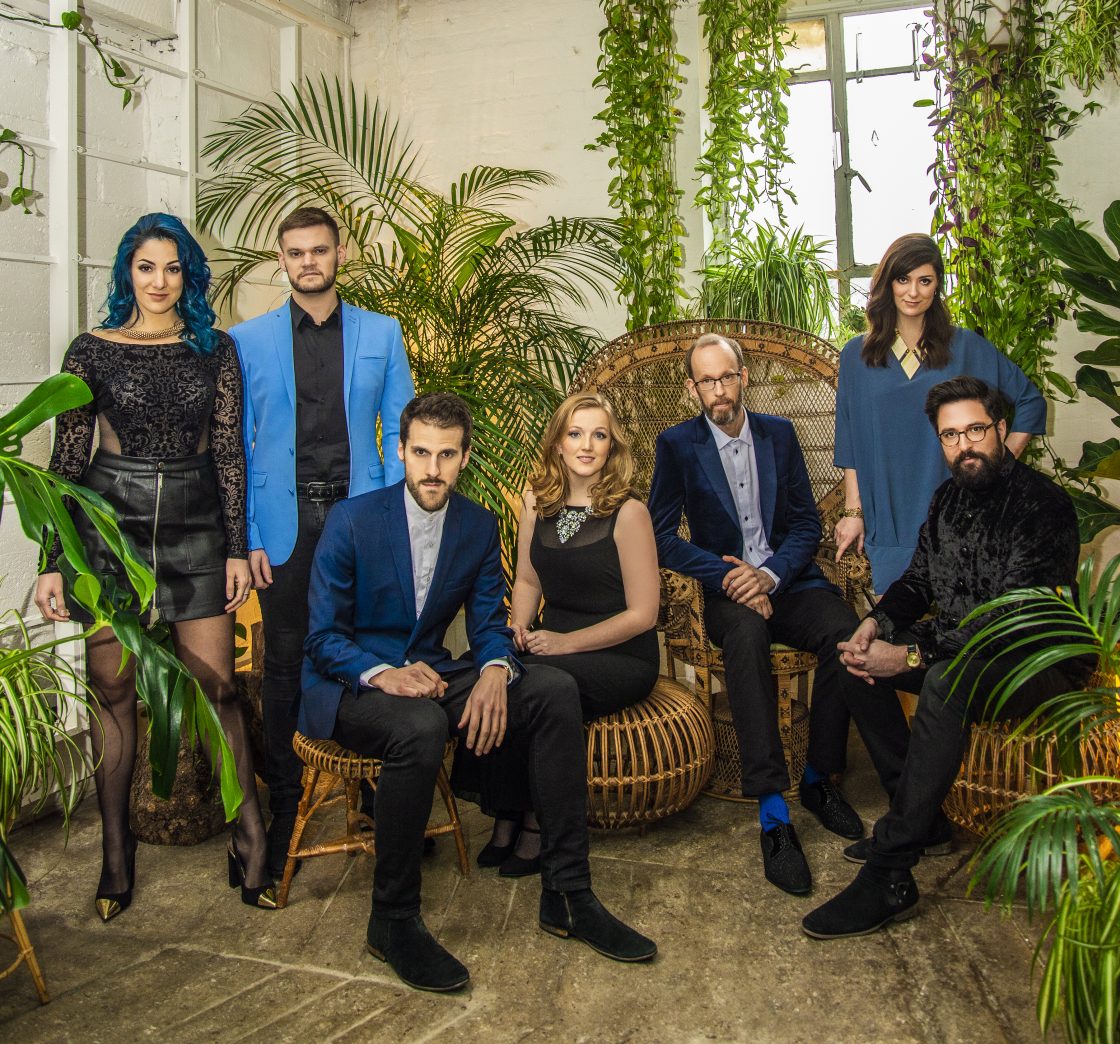 Under usual circumstances, I try to avoid reviewing the same artists more than once per year. Even if a musician or group is promoting a new project, there are enough similarities to make the second review redundant. However, the circumstances regarding the Swingles’ performance in Lakewood, Colorado last March caused me to reconsider the review policy. You can read the review of the earlier concert here but to summarize: The Lakewood concert was the first concert of the group’s spring tour, and due to unexpected issues with her artist visa, the Swingles’ new soprano, Federica Basile, was unable to fly to the US with the rest of the group. The Swingles edited arrangements during the overseas flight so that the remaining six singers could cover Basile’s parts. The group displayed its extraordinary flexibility on the Lakewood concert, but it wasn’t the same as hearing the group without artistic restrictions. Nine months later, The Swingles played the penultimate performance of their winter tour at Popejoy Hall on the University of New Mexico campus in Albuquerque. All seven singers were present and in spectacular voice. Taking place less than a week before Christmas, the program included several holiday favorites (some dating back to the earliest years of the group) along with several current non-seasonal arrangements.

The  opening Glorias set the tone as the Swingles sang with unerring pitch, launching a glorious set of overtones through the venue. This opening fanfare segued into Clare Wheeler’s lovely setting of “O Come, O Come Emmanuel”. The delightful Afghanistan folk song, “Lover’s Desire” introduced the singers in pairs (except Edward Randall, who sang his chorus alone). The program then went back to the holiday theme with three songs from the Swingles’ most recent holiday release “Yule Songs, Vol. II”: “Gabriel’s Message”, which told the story of the Annunciation; “Forgotten”, an original drinking song for the four men, with an elaborate clapping pattern for the three women; and Joanna Goldsmith-Eteson’s atmospheric combination of “We Three Kings” and Tchaikovsky’s “Arabian Dance”, titled “The Kings”. A pair of Bach pieces followed, both reprised from the Lakewood concert: “Air on the G String” with Imogen Parry performing a crystalline lead part, and Goldsmith-Eteson’s brilliant execution of the technically demanding “Badinerie” (As I listened to Goldsmith-Eteson’s performance, I recalled my interview with the group’s founder, Ward Swingle, who said of Goldsmith-Eteson’s performance of this piece, “She sings the hell out of that thing!”).

The next piece, “Narnia” was the highlight of the concert. Co-composed by Goldsmith-Eteson, current Swingles tenor Oliver Griffiths and former Swingle Sara Brimer Davey, Goldsmith-Eteson’s arrangement is even more impressive in live performance than on the album “Deep End”. On the CD, the additional voice parts were covered by choirs and individuals who had made contributions to the group’s crowd-funding project. When the piece is sung live (as on the linked video), the Swingles cover the additional parts with an elaborate system of digital looping programs. At Popejoy, Goldsmith-Eteson introduced the piece to the audience with a brief primer on live digital looping (emphasizing that the group was not singing to a pre-recorded track) but did not mention that there were twenty loops embedded in the arrangement! Even without this information, the dramatic piece, inspired by C.S. Lewis, had a visceral effect on the audience. When I went out to the merchandise table at intermission, virtually every audience member wanted to buy the album that included “Narnia”.

The Swingles returned after intermission with classic arrangements of “White Christmas”, “Sleigh Ride” and a medley of “Deck the Hall” and “What Child is This” (the medley was arranged by Ward Swingle for the group’s first Christmas album, while the other two were arranged by Swingle’s successor, Jonathan Rathbone). In between the Rathbone and Swingle arrangements came a contemporary piece based on “God Rest Ye Merry Gentlemen”. Inspired by a street carousel’s unusual harmonization of the carol, the piece also moves into an uptempo Irish jig and a jazz section in 11/8. The song’s introduction by the group’s temporary baritone, Nicolas Girard, ironically noted that those elements were just what you should expect in a Christmas carol! I was surprised that, unlike the original recording, the sample of the original carousel was not included in the live version.

In addition to being superb ensemble singers, the members of the Swingles are also accomplished soloists. Edward Randell’s warm but unsentimental performance of his original “Wrapped in White” perfectly captured the emotions of those who are unable to embrace the holiday spirit, and while Federica Basile’s feature was on LP’s “Tokyo Sunrise”, she made it clear—both in her spoken introduction and her emotional performance—that the song reminded her of her native Italy, where she was bound after the tour. Imogen Parry surprised me with her astounding range—although she is officially the group’s alto, she frequently jumped into the soprano range throughout the night. Of course, the Swingles do not lack a middle range with Oliver Griffith’s glorious high notes covering the same range as a second alto. Being a temporary member of the group, Nicolas Girard did not perform a solo piece, but tenor Jon Smith made up the difference with a fine turn on “This Christmas” at the end of the first set, and on a rollicking new arrangement of Ray Charles’ “Hallelujah, I Love Him So”. Smith, who is openly gay, used the masculine pronoun with glee, and Randell’s energetic setting transformed the Swingles into a vocal big band.

The program closed with another contemporary Swingles favorite, “Burden” and touching versions of “Auld Lang Syne” and “The Christmas Song”. While the Swingles are technically still in a transition period—to be rectified in the new year with the selection of a permanent baritone and solidified with a new recording—they remain in a class of their own, pushing the boundaries of vocal music without playing down to an audience. It was good to hear them again. 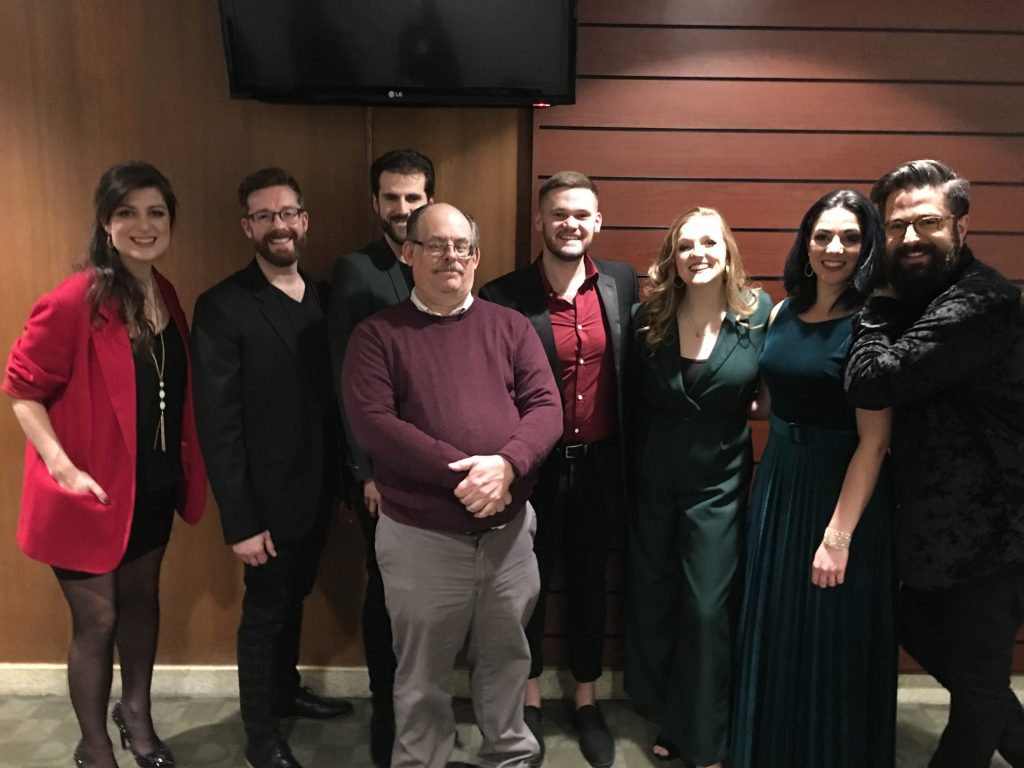