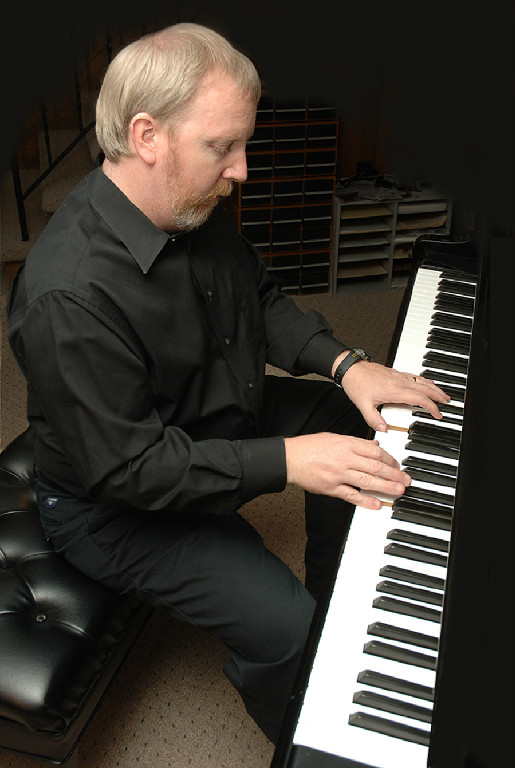 This past July, I was a faculty member at an annual summer choral festival held in the small bucolic town of Lomnice, a few kilometers from Tišnov in the southern Czech province of Moravia. Moravians (as well as Slovaks, further to the south) are known for many things: their lifestyle, hospitality, wine, and especially their music.  There is a long tradition for folk music, and song of any kind is revered.

I was invited to direct the Vocal Jazz Choir by my good friend Bárbora Pavlišová, the founder of the workshop.  Bára and her family live in the center of this lovely town, next to a 19th century church and just 300 meters from the Romanesque castle.  At home in the U.S., I live in eastern Pennsylvania, also quite beautiful, with rolling hills, forests, farms and greenery everywhere,  but with a lot more people.  The landscape in this part of Morava is not so much unlike the region of the U.S. that I have called home for sixteen years. However, the only buildings in small American towns that come as close in size to Czech castles are the local Mega-Walmart stores.  I don’t mistake them for castles.

The workshop gives participants three choral options.  Pavel Koňárek, a well-known conductor from Brno, directs the classical and folk ensemble (Klasika a lidové písně).  Also from Brno, and a member of the faculty at the Janáček Akademie of Musical Arts, Dada Klementová’s festival ensemble sings a mixture of genres (Mezižánrový ateliér), including some jazz repertoire, Simon & Garfunkel, and Czech folksongs.  The largest group is my Jazz Choir (Jazzový atelier).  Additionally, a small number of participants also work with Czech actor/singer Tomáš Trapi to prepare individual solos for the final concert.  At the end of the concert, the entire group comes together for one ensemble piece, also directed by Pavel Koňárek.

The participants come from every region of the country, and many travel with their local choirs.  Some are very young, but most are in their 30’s, 40’s and 50’s.  And they are prepared for seven to eight hours of daily rehearsals! During the workshop, all of the concerts take place in the Synagogue that serves as the town’s cultural center. (Here, we must acknowledge that no Jews still live in Lomnice.  Only two survived the Holocaust.  I am always aware of historical connections when traveling in Europe.)

I played the opening evening concert, joined by my Czech friends, tenor saxophonist Rostislav Fraš and bassist Josef Fečo, in a rare drummer-less trio performance.  We played a few standards,  adding in a few originals by Rost’a and me.  I played piano for most of the concert, but I sang a few pieces too, and switched to melodica for one as Josef took over at the keyboard. The response all night was overwhelming: cheering, encores, hugs, tears.  This is Europe.  These people allow you to be very vulnerable in front of them.  To me, it’s Heaven, but over here, it’s a typical response. Typical, but one that always humbles me.

On the second evening, a select number of amateur-directed choirs from different regions of the country are invited to perform.  All five are superb, but one is utterly astonishing.  This group, from Olomouc, features father, mother, two daughters, and one additional male and female voice.  I heard my name in some specific situation. A pretty girl sitting next to me leaned over and said, “this one is for you”.  I’m still not sure if I was the subject or object of the sentence.  It went by too fast.  There was plenty of mirth in the song, so I took it as a good sign. I never did learn the meaning of the text! The audience calls them back for an encore. Then the host group did a set to close the program. I came up and played “The Shadow of Your Smile” with them.  They too are called back for an encore. I understand what the singers expect from themselves on the final concert.  The bar is set very, very high, even for amateur-directed ensembles!

During the opening minutes of my first rehearsal, it was clear that the participants were very serious and that they have very high expectations about the learning process and culminating performance.  I am honored that so many have chosen to sing in my group.  My teaching style, here as anywhere, is quite intense, and most students here respond to it quickly.  My typical pace is fast and these singers are quite willing to concentrate, even as many do not understand my directives in English.  They also learn immediately that I welcome their questions and comments, including sections where they would like to hear parts again, or really any kind of question.  I gain their trust quickly, although there is some nice dissonance on the first day as more than a few admit that they don’t think we can pull off the repertoire in just four days.  I enjoy this most, because I know that they will excel and feel so much empowered by proving it to themselves.  As the days progress, I stop and tell stories periodically, to give some cultural context and to give the students a little break.  I use a lot of body language, and perhaps for the first time in five years of traveling in the Czech Republic, my sense of humor is understood.  I am home.

I am forever charmed by the Czech people.  Some speak English quite well, others only a small amount, and others hardly at all, but nearly all are quite apologetic about their English.  Meantime, I have been studying Czech slowly for five years.  (It is an unusually difficult language).  I try to use Czech in rehearsals (and must in many restaurants and shops).  How is my Czech?  It depends on whom you ask.  In shops, people are astonished that I am using Czech at all, because so few foreigners do, but realistically, I understand less Czech than the average 24-month old.  Bára’s two-year-old son Matěj is the only person that I can consistently understand.  He speaks only in the present tense and he never uses anything other than the nominative case!  So, why my Czech friends feel the need to apologize for their English always makes me wonder.  I think it involves respect for their American guest, and also an acknowledgment that English is the world’s lingua franca.  Actually, I can communicate many things in Czech, but not enough.  And after lunch, when everyone is a little sleepy from the heavy meal, I can hardly use Czech as I pick up the pace.

I bring five charts for the workshop, and we manage to learn all of them quite well.  Three are original compositions, another an arrangement of mine of the Gershwin classic, “They Can’t Take That Away from Me,” and the last, Roger Treece’s classic arrangement of “Bennies from Heaven.”  I have different objectives with each piece.  My own “The Thrill of Your Kiss,” is arranged more simply, only occasionally splitting to five parts, but there are lots of words.  So we work on American pronunciation of English.  I know that we will move forward, but perfection with pronunciation will elude us in four days.  With “Frydlant Samba,” I expose them to the samba feel, plus an opening section that progresses from a unison middle C to a dense, seven-note, stepwise cluster.  My “Summer Lament,” a tear-jerker, is an a cappella piece featuring a two-chord pattern of parallel eleventh chords against which a haunting solo soprano melody is delivered. Our soloist, Věrka,  sings it quite beautifully.  This piece, like “Frydlant Samba,” is wordless. At the final concert, we performed this piece in the round, surrounding the audience in the Synagogue.  It was the favorite for most of the choir and the audience.  In their special way, Czechs will call out “Krasná hudba” (beautiful music) at the conclusion.  Tears will abound. My arrangement of the Gershwin is somewhat difficult in places but the altos are fantastic and they hold it together.  The Treece is quite funny and most of my students understand the humor in English immediately, but alas, the audience will not!  It is the most difficult piece, featuring close four- and five-part harmony.

Many singers are having their first experience with jazz. Few can scat effectively, yet one singer, Martin, is outstanding and would be welcome on the stage anywhere.  I rely on him for many scat solos.  Others sing the verses that introduce the Gershwin and Treece arrangements.  Because there is such a strong aural tradition for music in the Czech Republic, these singers are able to swing quickly, in fact, much more quickly than a similar group of Americans. (Czechs are utterly amazed when I tell them that relatively few Americans like jazz or know anything about it.  Czechs, like all Europeans, celebrate their centuries-old cultural traditions and cannot imagine that we do not.)

The final concert is thrilling.  By now, many new friendships have formed and everyone’s life is changed permanently in that special way that happens at choral workshops.  The concert opens with the full choir.  They sing “Va, pensiero” from Verdi’s Nabucco.  “Krasná hudba!!!”  I have a good time listening to the mixed genres group singing “It Don’t Mean a Think if it Ant Got that Svink” –re-read that slowly for a little humor — as well as a Czech translation of Bye Bye Blackbird (Cerná vrána).  And each of Tomáš Trapi’s soloists is excellent.  “Mack the Knife”, sung in Czech, is both a personal and an audience favorite.  My group was focused and they delivered an excellent performance to conclude the concert.  The warmest expressions of appreciation followed.

As my host Bára introduced the faculty, I was standing in the balcony overlooking the large choir.  She called my name and I heard a roar from the students.  Then she says that I am returning to the workshop next year.  Another roar, bigger still.