In his column for the June issue of “Jazz Times”, Nate Chinen describes a 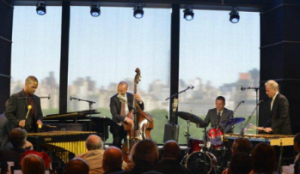 concert by Charles Lloyd at New York’s Metropolitan Museum of Art. After writing about the setting, Lloyd’s appearance and the spirit of the audience, Chinen reveals that he was not at the museum, but watching the concert live on the internet. Streaming video is nothing new, but more and more nightclubs are adding this technology in an effort to increase their revenue and bolster their image. Here at Jazz History Online, I’ve thought about incorporating reviews of internet feeds into our Concert Review section. To be sure, such a move would allow us to cover a wider range of performances, especially where we don’t have staff writers to cover the events in person. What keeps me from making the leap is the disappointing quality of many video feeds.

For many venues, the addition of video means little more than a single camera placed on a tripod. The camera is turned on before the performance and then is virtually forgotten by everyone in the club. The sound is rudimentary and the picture lacks clarity and close-ups. Shortly after completing my Swingle Singers article, I watched a live stream of Tobias Hug’s last concert with the group. The quality of the webcast was abysmal throughout, and the stream abruptly cut off at 10pm, even though the Swingles had just started the second half of their concert. Thus, any special recognition that group gave to Hug’s final performance was lost to all except those in the live audience. In recent months, I’ve watched a few streams from Brooklyn’s ShapeShifter Labs. Their single camera is placed on the right side of the stage, and at least once in every concert, the camera shot was obstructed by musicians standing in the sightlines after finishing their solos. The best of the single-camera streams comes from Jazz at Lincoln Center. The HD camera is mounted on the ceiling, the sound is well-defined stereo, and there is someone who can move the camera when necessary (as in a recent concert when Ann Hampton Callaway left the stage to sing to a member of the live audience). In addition, the large windows behind the JALC stage offer a glorious view of the New York skyline and Central Park; when watching in the summer, viewers can watch the gradual movement from twilight to nighttime taking place behind the performers.

At best, a high-quality single camera video feed can provide an experience that is as good as a live performance. However, television has spoiled us, and what we really expect is something better than live. For that experience, a multi-camera setup is essential. Fortunately, the advances in technology (including remotely controlled cameras) allow one person to adequately control a live video feed. The overall results will depend on the quality of the equipment and the skill of the engineer, but the results come closer to a live television broadcast than ever before. Chinen’s account of the Charles Lloyd concert describes intimate close-ups and an effective overhead shot that showed the band, the artworks and the audience. Chinen writes that the sound was “a board mix, probably too rough for a live album, but plenty vibrant and in real time”. Lloyd’s concert was presented online for free, but streams which offer a lot less visually and aurally cost up to $10 per view. With proper marketing, a venue willing to present high-quality streams could easily command the same price or more.

Smalls’ jazz club in Manhattan is poised to lead the jazz stream movement. They’ve streamed live performances there for several years, and have archived all of their concerts. At present, they use several ceiling-mounted cameras and a single stereo microphone, but club owner Spike Wilner has just launched an Indiegogo campaign to upgrade all of the equipment and to establish a new website where paying subscribers can watch live or archived video. The length and quantity of views will be automatically calculated so that the musicians in the performances will receive residual payments for their work. At press time, the campaign has already raised over a third of its goal (and by using the flexible funding option, all of the pledged money will go to Smalls, regardless of whether or not they hit their final goal). Assuming that Wilner can successfully implement his program and the technical upgrades, Smalls’ streaming program could revolutionize the way live jazz is presented and promoted. On a lesser scale, it could influence the way we review concerts at Jazz History Online.