Like John McNeil’s acclaimed quartet Hush Point, Ryan Keberle’s progressive combo Catharsis is rooted in the stylistic continuum encompassing the original Gerry Mulligan quartet, the Jimmy Giuffre Three, and the first Ornette Coleman Quartet. Using only bass and drums for the rhythm section, both groups display a high level of communication between its members, and 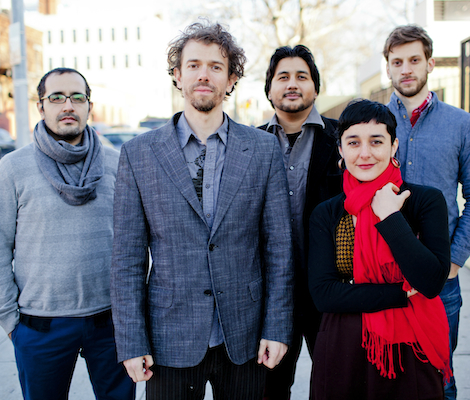 attempt to combine elements of the cool style with the energetic world of contemporary jazz. Keberle and Catharsis made their Denver debut with a one-night engagement at Syntax Physic Opera, but in order to appreciate the special qualities of their Denver performance, a little background is in order.

Formed in 2012, Catharsis made their first recording “Music is Emotion” as a quartet, with Keberle’s trombone sharing the front line with trumpeter Michael Rodriguez. Even at this early stage, the two men were exceptional musical partners. Keberle’s exuberant and angular lines acted as a perfect foil for Rodriguez’s melodicism. Set over the Charlie Haden-inspired bass lines of Jorge Roeder and the turbulent drumming of Eric Doob, the group established a penchant for improvised counterpoint and simultaneous improvisation. Most of the band’s repertoire was composed and arranged by Keberle, and his scores found the musicians imperceptibly jumping between full improvisations, background figures and composed melodies. Even on the occasions where Scott Robinson’s tenor sax was added to the group, the simultaneous improvisations were modulated so that no musician seemed to take the lead. Robinson served as a guest soloist for the debut album and its follow-up, “Into the Zone”, but the most important element of the latter album was the addition of vocalist Camila Meza. Singing with and without lyrics, Meza brought a new dimension to the group’s unique communicative qualities. Meza was never the traditional “singer with the band”. Rather, she became an integral part of the ensemble, singing background lines with one or more of the horns, performing scat solos, or joining in the collective improvisations. The band’s latest album, “Azul Infinito”, is a stunning collection of South American pieces which eschews traditional Latin rhythm backgrounds and transforms the works into progressive jazz. Keberle, Meza and Rodriguez work as a seamless front line, with an ever greater emphasis on collective improvisation.

Between the tunes at their Denver performance, Keberle told the audience that the group had just recorded a new album scheduled for release in the summer (For this tour, Matt Clohesy and Henry Cole replaced Roeder and Doob, and it wasn’t clear which rhythm team appears on the new recording. Regardless, Clohesy and Cole filled their roles with great energy and musicality). There were new elements added to the mix: Meza brought her hollow-bodied electric guitar to the stand, and on one number, Keberle played an electronic keyboard. Neither of these instruments really fit into the rhythm section per se: the keyboard was buried in the sound mix but it sounded like Keberle was playing melodic ideas instead of comping; Meza’s guitar doubled her vocal lines in the ensembles and was used as a solo instrument in some of the collective improvs (in the entire hour-long set, she rarely played chords). As on the last two albums, Keberle occasionally switched from trombone to melodica, but the effect was basically a textual addition rather than a chordal background for the soloists. Amongst the horn players (and Meza, who acts in that capacity), there were very few passages that could be called solos. Virtually every time that Keberle, Meza or Rodriguez started to improvise, the others would join in with an extemporaneous counterpoint. It reminded me of hearing a live performance by the Modern Jazz Quartet, where I literally leaned forward on the edge of my seat, trying to catch every note.

Unfortunately, the sound engineer did little to help Keberle and his group. The performance area at Syntax is situated in a narrow stone-walled room with open beams transversing the ceiling. A low-frequency boom emerged from the stage whenever certain bass notes were played. From what I could see, there was only one speaker hanging from the ceiling to provide sound reinforcement.  Catharsis’ opening act, an octet from the Colorado Conservatory for the Jazz Arts, barely fit upon the tiny stage, but at least the overall volume was kept at a reasonable level. When Catharsis took the stage, the sound level was raised by at least 10db, and that just amplified an unfocused mix. The engineer did not sense the delicate balance between Meza, the horns and the rhythm, and whenever Meza sang lyrics, it was nearly impossible to decipher the words (and as I noted in my review of her solo CD, “Traces”, she has exceptional diction across three different languages). This was particularly disheartening when the group performed a new protest song, “Become the Water”. We will all have to wait for the new album arrives to hear the message of this composition. On the set’s final number, a beautiful rendition of Sufjan Stevens’ “Sister”, the lyrics came through only when Keberle and Rodriguez dropped out. However, this is not a criticism of the horn players; the sound engineer should have recognized the need for level adjustments whenever Meza sang words.

The common inspirations behind Hush Point and Catharsis may indicate that jazz may be experiencing its first artistic movement in nearly five decades. Of course, the work of two groups is not enough to change the direction of the music as a whole, but the fascinating music created by these two fine ensembles could provide ample influence for others to follow. After many years of experimentation, the newest direction in jazz may stem from music recorded nearly 70 years ago!