The October 2014 death of Tim Hauser sent the Manhattan Transfer into a tailspin. Hauser founded the vocal group in 1972, and he remained a catalyst in the group’s direction until his passing. During Hauser’s illness, Trist Curless (formerly of m-pact) filled in for him on the Transfer’s tours. When Hauser succumbed to his illness, there was talk that the group might not continue. The sustaining members had been with the group for 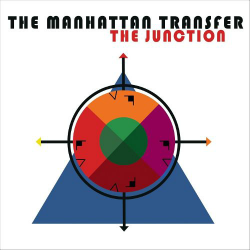 decades, and they had not made a new recording in several years. However, the group decided to continue on, with Curless as Hauser’s permanent replacement. Now, with Mervyn Warren (a charter member of Take 6) along as producer, the Manhattan Transfer has finally released their first studio album in a decade, “The Junction” (BMG 53835728). The opening track, “Cantaloop (Flip Out!)” is a vocalese remake of Herbie Hancock’s “Cantaloupe Island”, complete with Cheryl Bentyne’s re-creation of Freddie Hubbard’s original solo, and several intricate shout choruses for the ensemble. But the big surprise is that the voices sound processed, and most of the instrumental sounds are electronically produced. This sounds like an update of the electronic sounds used on the group’s breakthrough album “Extensions” and after getting used to the new sounds, it’s easy to focus on the tight production and outstanding musicianship. On “Swing Balboa”, the Transfer sounds like a 1930s big band transported into the distant future, and on Curless’ feature, “The Man Who Sailed Around His Soul”, the vocalists and band members unite in a contemporary swing style. Composer/saxophonist Grace Kelly guests on “Blues for Harry Bosch”, a nourish tribute to the police detective created by Michael Connelly for a highly successful series of novels. As on long-ago classics like “Spies in the Night” and “Ten Minutes Till the Savages Come”, the Transfer relishes this type of affectionate parody. Janis Siegel leads the group through the infectious dance number “Shake Ya Boogie”. The lyrics combine “Star Wars” references with jazz parlance, and there’s an interesting reference to Duke Ellington’s “Main Stem” embedded in the arrangement. This track is an example of how well the electronics enhance the artistic statement. Warren contributed a lovely samba, “Sometimes I Do”, which is a splendid feature for Alan Paul’s romantic vocals. The chart sounds like it would be fun to sing; I hope Warren publishes the arrangement for high school and college vocal jazz ensembles. Warren’s setting of Rickie Lee Jones’ “Ugly Man” follows, which features lush vocal harmonies and an admirable use of dynamics. The words were written 15 years ago, but they certainly resonate in the Trump era! The title track is an imaginative re-working of the Transfer hit “Tuxedo Junction”. I’m sure that the group has found a way to sing new version live; it will be interesting to see how they work in the electronic-heavy tracks. The album closes with a rhythmically engaging arrangement of “Tequila”(combined with an original by Paul, “The Way of the Booze”) and the exotic Les Baxter opus “Paradise Found”. “The Junction” is a fun and compelling return to the studio for the Manhattan Transfer. I suspect Tim Hauser would be pleased, and I’m sure that the legions of Transfer fans are happy as well.

While the New York Voices have not endured a tragedy like Manhattan Transfer’s, they have also spent a number of years away from the recording studio. Their newest release is a collaboration with the Bob Mintzer Big Band, “Meeting of Minds” (MCG Jazz 1045). The Voices’ creamy blend acts as an effective contrast to Mintzer’s sharply accented instrumental lines on “Autumn Leaves”, and the two forces unite later in the track on a 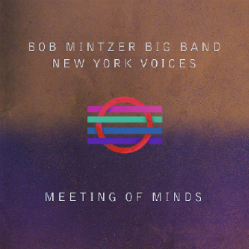 superbly executed shout chorus. On “I Concentrate on You”, there’s another shout chorus for the Voices. This time, there are original vocalese lyrics, and Mintzer provides a lighter background, eliminating the brass and adding a simple saxophone counter-melody. Much like the Pied Pipers and Modernaires were used as a separate section in the scores of the Tommy Dorsey and Glenn Miller orchestras, respectively, Mintzer seems keen on treating the Voices as a unified entity. In addition to Mintzer’s tenor sax, his ensemble has several top-notch soloists including saxophonists Bob Sheppard, Bob Malach, and Roger Rosenberg, trumpeter Scott Wendholt, trombonists Jeff Bush and Jay Ashby, pianist Phil Markowitz and bassist Jay Anderson, and Mintzer wisely gives all of these players ample solo space. In addition, two of the tracks (“I Want to Be Happy” and Mintzer’s original “Weird Blues”) are instrumentals, which display the group’s outstanding ensemble work and powerful swing. “I Get Along Without You Very Well”, features Peter Eldridge in the triple role of co-arranger, pianist and lead vocalist. Darmon Meader collaborated on the chart, which contains some of the richest vocal and instrumental colors on the album. “The Way You Look Tonight” (with lead vocals by Kim Nazarian and Eldridge) covers much of the same territory as “Autumn Leaves”, until the final chorus when the Voices sing the melody with the lead jumping from part to part. Meader’s setting of “You Go to My Head” is set to a long-meter Latin background, and in the opening chorus, the Voices perform an intricate variation on the well-known melody—a concept which dates all the way back to the Boswell Sisters! While Meader apparently left his tenor sax at home, he sings the album’s only scat solo, which segues into another brilliant variation by the Voices. Lauren Kinhan’s soulful alto leads a slow and funky treatment of “Old Devil Moon”, and she provided additional lyrics for the tricky arrangement of “Speak Low”. While I admire the vocal/instrumental shout chorus idea, it loses its effectiveness by this point in the disc, and I wish that Mintzer and Meader would have discovered a few more concepts for this historic collaboration. While the entire album is expertly played and produced, this album falls just short of expectations.