Ray Charles: “Live in France 1961” (Reelin’ In The Years/Eagle Vision) 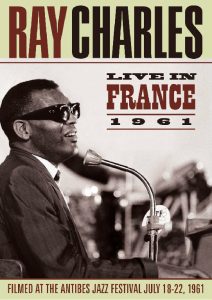 Without a doubt, “Ray Charles: Live in France” represents an important historical milepost in the career of its star. Recorded over four nights in July 1961, the DVD captures Charles in his first European appearances, and it offers several insights into Charles’ music and stage presence. In the two years prior to these performances at the Antibes Jazz Festival, Charles had moved from the independent Atlantic Records to the corporate ABC-Paramount. The bigger company allowed Charles to record with larger orchestras and choruses, and to expand his musical horizons. “Modern Sounds in Country-Western Music” was still a year away, but the groundwork had been laid with Charles’ masterful recording of “Georgia on My Mind”. Atlantic was still issuing their unissued Charles recordings, so there was no shortage of new Ray Charles albums in the summer of 1961.

Charles did not take his full big band with him to France for the Antibes performances, rather bringing just the Raelettes and the octet that he had used in his Atlantic days. Apparently, Charles didn’t have octet arrangements for some of the ABC hits, and it’s a little strange to hear “Georgia” and “Ruby” without the orchestra and chorus. These performances on the DVD are quite stark, letting Charles’ vocals offer the main colors. Only David “Fathead” Newman’s running flute commentary on “Georgia” offers any contrast. Having the octet allowed Charles to perform some of his jazz instrumentals, including James Moody’s “The Story” (a blues with a bridge), Horace Silver’s “Doodlin’” (in a Quincy Jones arrangement that retains the exaggerated baritone sax breaks from Dizzy Gillespie’s Newport performance), and “One Mint Julep” (the most recent arrangement, stemming from Charles’ “Genius + Soul = Jazz” Impulse LP).

The main feature section of the DVD combines performances from three nights. The opening night, July 18, was also the day the band arrived in Europe. Charles and the band look a little jet-lagged and their set, apparently here in its entirety, starts with the jazz instrumentals and then moves right to the hits, “Let the Good Times Roll”, “Georgia”, “Sticks and Stones”, “Hallelujah, I Love Her So” and “What’d I Say”. The final hour combines the last two nights, July 21 and 22, with most of the material apparently from the closing night. On these shows, the band looks rested and Charles’ sets are more leisurely, with an emphasis on ballads and lesser-known songs, including Nat Cole’s “With You on My Mind” (which Charles never recorded commercially). While the crowd seems less enthusiastic during the majority of Charles’ set, at the end, they demanded and got a group of encores. The supplemental section includes five songs from July 19 and the July 21 version of “I Wonder”.

There were several songs repeated over the course of the Antibes run, and it appears that all of the surviving footage has been collected on the DVD. The biggest surprise on this disc may be that these multiple versions are quite similar. This is most apparent on the three versions of “What’d I Say”. If there was any song that could—or should—change from night to night, it would be this call-and-response vehicle that was reportedly improvised at a club date years earlier. I suspect that Charles and his manager Joe Adams were striving for a professional stage production that would stay consistent between performances. Certainly, anyone who saw Charles in person or on television was impressed with the slick production of his appearances. That professionalism was still in process in 1961. On the first night of Antibes, Charles’ instrumentalists had their music draped over chairs, because their music stands were unaccountably missing. Charles was saddled with a vocal mike that seemed to fade in and out, and despite a plethora of microphones onstage, there are all kinds of balance problems with the audio on this recording (The DVD producers have substituted an RTF radio broadcast for some of the audio. While that was probably an improvement over the 16mm, I wonder if some of the horns were captured by the film mikes and not the radio ones). The overall sound is distorted throughout the July 19 film and on the final nights, Charles has a new vocal mike, but he kicks the mike stand several times during the performance, essentially ruining the sound. Midway through one of the last nights, something goes wrong with Edgar Willis’ bass, and we see Adams bringing out a different instrument. In later years, such a maneuver would never be seen on a televised Charles performance.

Reelin’ In The Years, who also produce the excellent Jazz Icons series, have brought their usual technical expertise to this project. The original film is in very good condition for its age, and other than a few scratches and some dirt specks, the video is above average. As noted, the sound is not pristine, but that may have been the state of the original soundtracks (both film and radio). I don’t understand why they combined the performances of July 21 and 22, and why those performances were spliced together with July 18 to make a pseudo-feature. Since the obvious mission of this disc was to include all of the surviving footage of Ray Charles in Antibes, why not just leave each performance as its own entity? It might have made the entire musical program stronger and it would have emphasized the historical importance of this DVD. Nonetheless, this set comes highly recommended for Charles’ fans, and anyone interested in the history of American Pop.