The Process and the Product

Bill Evans once said the problem with the question “What is Jazz” is that it’s the wrong question. Jazz is not a “what” but a “how”.  When I asked pianist Art Lande about his recent recordings with Colorado vocalists Bonnie Lowdermilk and Tina Phillips, he amplified Evans’ quote and found a common approach shared by the two singers, stating that jazz is a process rather than a product. In other words, the artistic exploration continues and deepens every time they play. The result may sound unpolished or unfinished at times, but the spirit of creation makes these performances more satisfying than a tightly controlled “finished” arrangement.

Lowdermilk’s album “Borderless Crossings” documents her transition from set pieces to exploratory works. For years, she has performed in local restaurants and clubs, singing and playing a polished repertoire of songbook classics and jazz standards. The album reflects some of this music, with comfortable, engaging performances of songs like “I’ve Grown Accustomed to His Face”, 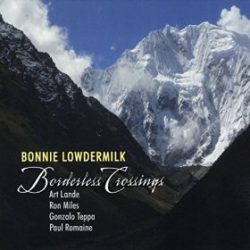 “Get Out of Town” and “Suddenly It’s Spring”. However, when Lowdermilk cedes the piano chair to Lande, the mood and approach changes as the band tackles three of Lowdermilk’s originals, a rarely-heard Jobim gem and a composition by Kenny Wheeler and Norma Winstone. The rhythm section of Lande, bassist Gonzalo Teppa and drummer Paul Romaine play with a surging energy not heard on Lowdermilk’s previous albums. The title track was inspired by Lowdermilk’s hike over a 15,000 mountain pass on the road to Machu Picchu. The song alternates a jagged primary motive with a smooth but insistent legato line. Ron Miles’ cornet acts as Lowdermilk’s hiking partner, echoing and answering the vocalized motives. “Sleep” opens with Lande strumming inside the piano, Teppa’s high harmonics and Romaine’s free cymbal fills. Lowdermilk’s melody and lyrics are both fragmented at the outset, but as the lines expand into full sentences, the band gradually falls into a gently swirling waltz, only to drop back into rubato near the end of the chorus. Performed as a piano/voice duet, “One Afternoon” has a rhythm which ebbs and flows instead of marching through time. The lyrics describe an intense, but short-lived romantic encounter, and the melody meanders as it mirrors the emotions of the two would-be lovers. Then suddenly the man disappears, never to be seen again, and the song stops without any sense of finality. After a beat of silence, the band jumps into “Two Kites”, a breathless Jobim song which—in Lowdermilk’s rendition—imagines a joyous future for the same characters. Lowdermilk doesn’t completely conquer the thorny melodic lines of the Wheeler/Winstone song, “Winter Sweet”: there are occasional pitch issues and she fails to capture the amiable adventurousness that characterizes Winstone’s style. Still, performing this piece represents a major shift from Lowdermilk’s usual repertoire, and further challenges like this can only increase her artistry. 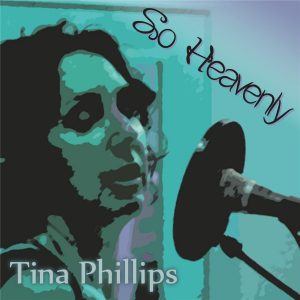 While Lowdermilk’s transition is a fairly recent phenomenon (and still a work in progress), Tina Phillips has been traveling the adventurous road for many years. Her new album, “So Heavenly”, collects ten original songs composed over the past fifteen years. The musicians who accompany her—master accompanists Lande and Eric Gunnison alternating on piano, the powerfully swinging Mark Simon on bass, and the ever-resourceful Jill Fredericksen on drums—have worked with Phillips for many years and are clearly familiar with her advanced musical conception. The songs combine well-crafted and poetic lyrics with settings that include frequent episodes of rubato, mixed meter, and harmonic modulation. Like Lowdermilk’s songs, Phillips’ pieces reflect on important people and events in her life. The range of emotions in her lyrics is quite impressive, from the gushing love of the title track (dedicated to Phillips’ granddaughter) through the free associations of “Fly, Snow, Time, Sigh” and the sly humor of “It”. When mixed in with Phillips’ imaginative and unpredictable melodic lines, the message of the songs are sometimes obscured, but the sensitive arrangements—and the band’s experience playing them—balance things out, as when the band plays a deliberately pedestrian beat to introduce Phillips’ comic tale of a mismatched couple, “I’m Just a Simple Girl” or in the subtle rhythmic shifts that occur within “Musical Flavors”. (It is particularly instructive to listen to Fredericksen’s remarkable work on these tracks. There are preciously few drummers who can dig into the music as she can, finding all of the right places to accentuate the inner pulses of the music).  Phillips continually surprises the listener with her imaginative melodic variations and her daring scat solos. She uses her wide range and remarkable harmonic sense to great advantage throughout the album, never choosing the easy path, but nearly always finding the most interesting direction. While Phillips’ music is progressive, it retains accessibility. The shifts in tempo, meter and key are understated, and they follow an undeniable musical logic.

At Phillips’ recent CD release party, the music was considerably more adventurous than on the recording. While the ensemble frequently pushed the envelope, it stayed just this side of the edge. Historically, Lowdermilk has taken fewer chances when performing live. At this writing, she has not added her new pieces to her live repertoire, wanting more opportunities to play through the music with the original band before offering it to other musicians. However, opening up the music to different players might be exactly what the music needs. It might not sound the same, but the differences might be enlightening.