Politics and the American Jazz Orchestra

As I have written in pages before, politics and jazz makes very strange bedfellows. Generally speaking, politics work in the present and future tense: it is mostly a case of finding a candidate to fix the problems of our time and beyond. Jazz exists in the present when performed live, but its heritage comes from the past, through recordings. We can marvel how Lester Young or Duke Ellington sounds up-to-date even when transmitted through an 80-year old recording, yet we also enjoy hearing a contemporary musician create on the bandstand. Of course, with a divisive and bizarre Presidential campaign in its final weeks, it is only natural that jazz musicians—who deal with society’s highs and lows along with the rest of us—would make a stand through their music. Three new big band albums released in the past few weeks offer stunningly different approaches to life in these United States.

It was a shock to see the title of Delfeayo Marsalis’ new CD, “Make America Great Again!” (Troubadour 103016) but while the title is associated with Donald Trump’s presidential campaign, it’s quite clear that Marsalis is not part of the Republican camp. The album opens with “The Star-Spangled Banner” voiced for the saxophone section, and through the first few tracks, Marsalis’ Uptown Jazz Orchestra seems content to celebrate the joys of American music with stomping versions of the Dirty Dozen Brass Band’s “Snowball” and Ellington’s “Second Line”. It is on the fourth track that the politics start to show through. That track features a female vocal group, The Uptown Music Theatre Choir, delivering the sharply racist exhortation “Back to Africa” with s 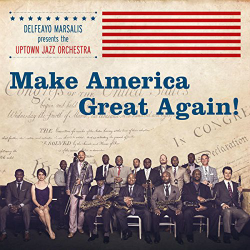 assy retorts from rapper Dee-1. The title track follows, with Wendell Pierce from “Treme” piling on further sarcasm with a wordy but biting commentary presumably written by Marsalis. “Dream On, Robben” is a tribute to Nelson Mandela well-sung by Cynthia Liggins Thomas, but veering rather close to smooth jazz and R&B. It’s all part of the same heritage, of course, but the track seems a little out-of-place on this album (the instrumental version offered as a bonus track is actually better). The CD gets back to straight-ahead instrumental jazz with a powerfully swinging version of Benny Carter’s “Symphony in Riffs”, with fine solos by Andrew Baham (trumpet), Khari Allen Lee (alto sax), Meghan Swartz (piano) and Peter Varnado (drums). “Put Your Right Foot Forward” features a romping New Orleans parade groove and a group vocal led by Dr. Brice Miller. Trombonists Charles Williams and Jeffery Miller ride over the surging rhythm with an inspired set of exchanges, and clarinetist Gregory Agid plays a strong solo over the ensemble at the end. The classic Count Basie arrangement of “All of Me” follows with guest Herlin Riley fueling the band from the drum kit (despite the copious liner notes, there’s no credit for the original arranger, Billy Byers!). The choir returns for “Living Free (and Running Wild)”, which would sound like a throwback to the 1970s if not for the rap vocal. The message—claiming that African-Americans are the true Native Americans—is powerful (and potentially controversial) but the dated quality of the opening and closing choruses dulls the overall effect.  Marsalis plays a gorgeous trombone solo on his arrangement of the Hoagy Carmichael standard “Skylark”. Phil Sims’ cute arrangement of “Java” is a fine tribute to Allen Toussaint (and at two minutes, all I care to hear of this potential earworm!) Marsalis’ chart on Aaron Copland’s “Fanfare for the Common Man” is much more jazz-oriented than the old arrangement Woody Herman’s band used to play, and Marsalis’ blues solo seems to flow effortlessly out of the composition. The title of this album might turn off some potential buyers, but it is a solid tribute to the rich legacy of American music.

Ted Nash’s “Presidential Suite” (Motéma 203) is subtitled “Eight Variations on Freedom”, and is based on the words of eight famous political speeches. Specifically, Nash created his main themes based on the speech rhythms and vocal inflections of the speakers. And so, John F. Kennedy’s inaugural speech is miraculously transformed into a stomping blues. Each movement is preceded by a reading from the speech by a 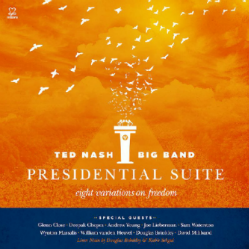 prominent politician or celebrity, and while readers like Joe Lieberman, Deepak Chopra and Douglas Brinkley do their best to retain the speaking styles of JFK, Nehru and Reagan respectively, it might have been better to use the original historical recordings. Except for Chris Crenshaw’s vocal on the final track, Nelson Mandela’s “The Time for the Healing of the Wounds”, the connection between words and music is not always obvious. However, the music is quite extraordinary on its own (and Motéma includes a second disc in the package, which offers the music alone). Nash has created a suite that covers a great deal of musical ground, utilizing elements related to each original speaker (for example, a delightful Burmese pattern in the woodwinds throughout “Water in Cupped Hands”, a piece inspired by the words of the Myanmar political leader Aung San Suu Kyi) and capturing the essence of the words (as in the melodic urgency on “The American Promise”, Lyndon Johnson’s “We Shall Overcome” speech). “Four Freedoms” uses changes in both the musical styles and the soloists to illustrate the concepts in Franklin D. Roosevelt’s speech. In the hands of a lesser composer, this could be a rather obvious gimmick, but Nash makes the idea work in a purely musical sense, and that makes it art for the ages. Nash’s soprano sax solo on the grooving 7/4 “Spoken at Midnight” bursts with emotion, and the orchestral background bites and gnaws like a hungry lion. Nash has assembled a magnificent band to realize this score, and the soloists, including trumpeters Ryan Kisor, Greg Gisbert, Kenny Rampart and guest Wynton Marsalis, trombonists Vincent Gardner, Elliot Mason, and Chris Crenshaw, saxophonists Walter Blanding, Sherman Irby, and guest Joe Temperley (was this his last recording?), pianist Dan Nimmer, bassist Carlos Henriquez and drummer Ali Jackson, all provide strong solos that do not override the emotions present in the composition. This album celebrates freedom in all forms, and reminds us that freedom is far from a partisan issue.

“Real Enemies” (New Amsterdam 81) is Darcy James Argue’s 13-movement composition which delves into the thorny world of conspiracy theories. As the subject matter indicates, it is a deeply unsettling work, and Argue uses 12-tone technique to keep the music free of standard cadences and familiar chord sequences. Even when he introduces a repeating funk riff—as on the second track, “The Enemy Within”—the orchestration is nervous and edgy, which makes John Ellis’ solo tenor sax seem like an adversary to the band, rather than one of their own. Instead of using Nash’s approach of including speeches isolated at the beginning of the tracks, Argue drops sound bites into the score when they are most effective, as when JFK’s “Secret Society” speech is integrated into the orchestration on ”The Hidden Hand” (special kudos to Jon Wikan, whose drum patterns match Kennedy’s to the syllable!) “Cassus Belli” and “Crisis Control” mark the apex of the work, as they deal with the threats of terrorism. The sound bites are recent—and frightening. The anxiety of the music echoes our uncertain times. While Argue admits that film scores were one of his inspirations for this suite, what elevates this music beyond the cinema is the overwhelming intensity that Argue’s orchestra brings to every phrase. This music could not be the soundtrack for a film because the music captures our attention better than any celluloid image. In “Best Friends Forever”, the ensemble heaves and moans like one of Charles Mingus’ big bands, and throughout the album, the soloists (including trumpeters Ingrid Jensen, Nadje Noordhuis and Matt Holman, trombonists Ryan Keberle, Mike Fahie and Jacob Garchik, saxophonists Sam Sadigursky, Dave Pietro and Rob Wilkerson, pianist Adam Birnbaum, guitarist Sebastian Noelle and bassist Matt Clohesy) enhance Argue’s composition with thoughtful but emotional improvisations.  Argue is to be commended for this remarkable composition. It is a brilliant manipulation of the big band medium, and it offers striking commentary on the issues of our time. Like the other albums in this review, this music will remain relevant long after the current election cycle.