There’s a lot of screaming happening in our world right now. From the Twitter ravings of the current occupant of the White House to the heated arguments both on cable news and at the local diner, everyone raises their voice in an effort to be heard above the din. Sometimes, a whisper can be as effective as a scream, and the discs reviewed here make (primarily) understated statements regarding the political turmoil that engulfs our daily lives. Certainly there are occasional outbursts, but those are to be expected in good music and troubled times.

“Town and Country” (Sunnyside 1484), the newest duet album from vocalist Dominique Eade and pianist Ran Blake, examines a broad swath of American music ranging from spirituals to Bob Dylan. The album opens with the “Lullaby” from Charles Laughton’s eerie film noir “The Night of the Hunter”, then makes an abrupt turn with Dylan’s “It’s All Right Ma (I’m Only Bleeding)” where Eade spits out the words with great intensity while never raising her voice above a mezzo-forte. Blake, who keeps his chords at a dynamic well 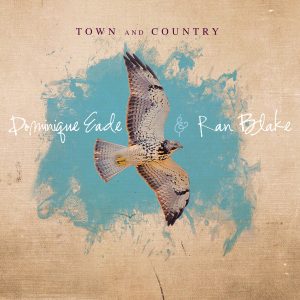 below Eade’s voice on the first two tracks, makes his presence known on “Moon River” where his unique reharmonization adds an eerie undercurrent to the Henry Mancini classic. As the track progresses, Eade moves further away from the melody, ending the track on an unsettling note. This leads into the first of two versions of Jean Ritchie’s stunning “West Virginia Mine Disaster”, which features Blake’s ominous bass rumblings under Eade’s fragile vocal line. As the duet segues into “Elijah Rock”, the already impressive range of the two musicians is evident once again: Eade switches from the Scottish-inspired foik of Ritchie to the full-throated gospel of Mahalia Jackson with seemingly little effort, while Blake displays his method of taking any piece of music—regardless of genre—and making it instantly a part of his own harmonic vocabulary. I doubt that Johnny Cash would have recognized Blake’s harmonic interpretation of “Give My Love to Rose” but it perfectly matches the intensity which Eade brings to the melody and lyric. At the recital’s central point, Eade and Blake turn to a straight performance of “Thoreau” by Charles Ives, whose influence can be heard throughout this album, and for that matter, most of Blake’s previous recordings. The album’s second half reprises some of the music and concepts from the first half: another melody from “Night of the Hunter”, alternate versions (and arrangements) of “West Virginia Mine Disaster” and “Harvest at Massachusetts General Hospital”, but there are also fresh surprises like Eade’s sultry take on “Open Highway” (from the old TV series, “Route 66”) and “Gunther”, an atmospheric improvisation based on a tone row devised by Blake’s mentor, Gunther Schuller.  “Town and Country” takes an unusual approach to musical protests: the subject matter of the songs touch upon many of today’s issues, but the repertoire pre-dates the current administration so there is no opportunity to make a direct commentary on the issues. However, the bleak foreboding nature of the album says much more about today’s world than any specific remarks ever could.

I first heard Ryan Keberle’s protest music when he and his band Catharsis performed in Denver last February. Due to a less than ideal sound system, I was unable to decipher the words sung by Camila Meza and the band. With the release of “Find the Common, Share a Light” (Greenleaf 1055), I now realize that the opening track, “Become the Water” is an urgent call for national unity and necessary actions. Yet, this extraordinary combination of artists never forgets that making music is their primary objective. As on their 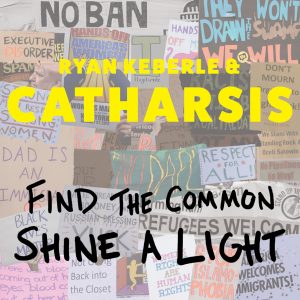 previous recordings, Catharsis shows that they are a communicative ensemble, playing their best in group improvisations where no one voice becomes the leader. On  the perfectly-titled composition, “Empathy”, Keberle’s trombone, Mike Rodriguez’s trumpet and Meza’s voice each contribute distinctive lines to the improvisation, while bassist Jorge Roeder and drummer Eric Doob discover ways to interact with each other and the front line. The strength of musical unity is displayed—without words—in this remarkable track. Keberle’s original, “Ancient Theory” salutes Ornette Coleman, who Keberle terms “the ultimate revolutionary”. The track includes passionate solos from Rodriguez and Keberle (and is one of the few spots on the entire disc where the soloists play without interaction from the other players). The Coleman influence can also be heard later on the CD, on a superb quartet improvisation (without Meza) called “Strength”. I’m usually not a fan of Beatles covers, but the Catharsis version of “Fool on the Hill” fully transforms the original into a progressive jazz piece, and Meza’s poignant vocal brings out new interpretations of the lyrics. While the band keeps a lid on their dynamics through most of the album, there is a brief but powerful eruption on another group improvisation, “Mindfulness”, which segues into a stunning version of Bob Dylan’s “The Times They Are A-Changing” which builds in intensity with each succeeding chorus. The album’s final track, “I Am a Stranger” is both a summation of the album’s themes of unity and political awareness, and an expansion of the group’s dimension, with the inclusion of multi-layered horn and vocal overdubs. The lyric, by Vito Aiuto, speaks of the importance of community, and the expanding ensemble illustrates the point with conviction. The repeated quote of “Everything’s Alright” seems ironic to me; we need to do a lot of work before everything will be all right again.