Outside In (by Scott Shachter) 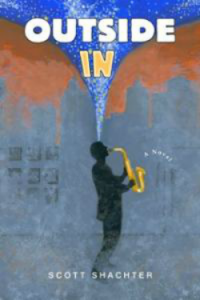 I am a big supporter of artists whose use their accessible style to lead their audiences into challenging music. Scott Shachter may be the literary equivalent. He opens his new novel, “Outside In” (Star Beat Press) with a funny narrative about an avant-garde jazz saxophonist named Shawn Lewis who has some of the worst gigs in New York City. He performs in a Mafia hangout where stops, starts and volume levels are dictated by the mob boss, and he plays hotel big band gigs with neurotic sidemen and incompetent leaders. While he blows free solos during all of his gigs, no one welcomes his free spirit except at an awful hole-in-the-wall joint where few people listen. One night, he brings his girlfriend to the gig, and she breaks up with him because she can’t understand his music. While playing a gig on a parade float, Shawn is accosted by Jimmy, a mentally disturbed 50-year old dressed all in red. Through some behind-the-scenes maneuvers, Shawn is later hired to play at a house concert hosted by Jimmy’s parents. Jimmy, who seems to be the only person captivated by Shawn’s music, sits right by the bandstand. Jimmy’s parents, seeing that Shawn’s music has brought their son “out of his shell”, hire Shawn to come to their apartment every week to play unaccompanied solos for Jimmy.

The above summary barely covers the first part of the story. It might have made a good short story about a jazz musician’s life and the benefits of music therapy. Shachter hits all the right points about eccentric musicians, the rough-and-tumble living conditions in Bronx apartment buildings, and the healing effect of music. Shachter brilliantly sets up comic situations where numerous people talk to Shawn at the same time, leaving the saxophonist utterly confused about who he needs to reply to next. But Shachter’s story has a larger scope. Shawn takes a new job and is separated from Jimmy. Years later, they reunite, and through what Jimmy calls a “bridge”, Shawn discovers that he has much more in common with Jimmy than he thought. At this point, the narrative takes a turn to the weird, and it just gets stranger as it goes. But by the time it happens, the reader is engrossed in the story and is eager to discover just how it comes out. I won’t spoil the plotline, but I will say that I admire how a climactic set of episodes in the latter part of the book brilliantly expands upon a situation created early in the narrative.

Shachter’s book truly captures the spirit of jazz, and as the book progresses, the reader can barely guess the narrative’s next direction (those who read the book a second time will find several clues embedded in Jimmy’s monologues). I suspect that Kurt Vonnegut is one of Shachter’s influences. While the writing styles of the two authors are quite different, both throw in wildly incongruous events as throwaway jokes. For example, in Vonnegut’s “Breakfast of Champions”, a dog suddenly appears and bites the narrator. The dog was upset because he had been written out of the novel in the previous draft. In Shachter’s book, Shawn records a CD with a single hour-long track of atonal jazz. Later, in an aside to his manager, Shawn says that the CD is getting frequent airplay on jazz radio stations all over the country (Not on any jazz stations I’ve ever heard!). Another Shachter influence may be Steven Spielberg—or at least the filmmaker’s writers. The ending of the book resembles one of those “double endings” found in Spielberg’s movies: a perfectly fine, but bittersweet coda is followed by a more traditional happy ending. I wouldn’t dare to offer an alternative ending, but I wonder if the last episode was really necessary.

In addition to his literary pursuits, Scott Shachter is a jazz saxophonist living in New York City. I don’t know him and I’ve never heard him play, so I can’t speculate on how much of the story is autobiographical. However, I will give Shachter credit for a brilliant imagination. If he plays as well as he writes, he might be worth hearing. While waiting for his major label debut, musicians—especially woodwind specialists—should check out his book. As we all know, every saxophonist is looking for a good read.