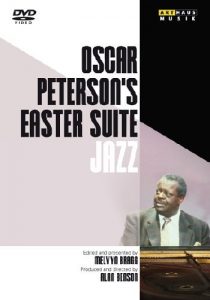 For 32 years, one of the gems of British television was “The South Bank Show”. Named for the artistic center of London, and hosted by Melvyn Bragg, “South Bank” was an ambitious magazine program about the creative arts. The subjects ranged from author Douglas Adams to avant-garde jazz saxophonist John Zorn, and the presentation and research was always thought-provoking and tasteful. Back when Bravo was still a US arts channel, several “South Bank” episodes played here, including Oscar Peterson’s “Easter Suite”. In 1984, the producers of “South Bank” commissioned Peterson to create this nine-movement suite for jazz trio, and the premiere performance (now issued on a Naxos/Art Haus DVD) was repeated on Good Friday for several years afterwards. It is commonly listed as one of Peterson’s most important compositions, but Peterson never made a commercial recording of the piece, so it is virtually unknown except to those who saw the “South Bank” broadcast.

Unlike the sacred music of Duke Ellington, Mary Lou Williams, Dave Brubeck and Vince Guaraldi, Peterson’s “Easter Suite” is a purely instrumental work. Peterson tells the Resurrection story as a series of contrasting scenes. While specific quotes are clearly delineated in the music (one can especially pick out the speech rhythms for “Are You Really King of the Jews?”), the movements work well as stand-alone pieces. Yet, by placing himself in the spiritual context of this suite, the active listener can hear the wind through the olive trees in “The Garden of Gethsemane” and visualize the Roman soldiers in “The Trial”. As with the best Peterson Trio performances, there is a great deal of interaction between the three voices, and the interplay is an important part of Peterson’s composition. On “The Denial”, Peterson’s piano is in direct contrast with Martin Drew’s drums as the two throw accusations and denials back and forth. In some ways, the bass of Niels-Henning Ørsted-Pedersen acts as the embodiment of Christ. He too, is in dialogue with Peterson throughout the work, but it is the bass alone that portrays Jesus’ death on the cross. Peterson never claims that he associates Christ with NHØP—and the portrayal only happens in the most dramatic sections of the suite—but there is no doubt that the soulful, vibrato-rich sound which NHØP achieved with his bass is the most human sound in the trio. The suite includes a wide variety of styles including jazz waltz, minor blues, chorale and spiritual. While there are several moments of Peterson’s exuberance (particularly in the closing “He Has Risen”) he never loses the reverential focus of the total piece.

When this program played in the US, Bravo only broadcast the 35-minute suite. The Naxos/Art Haus DVD restores a 15-minute interview with Peterson that was originally broadcast as the opening of the episode. While Bragg does not delve into purely musical questions, he gets Peterson to talk about the suite and how each movement relates to the Easter story. Peterson and the trio play snippets from the compositions which stay in the viewer’s memory when the full work is played. The production is understated, with smooth and unobtrusive camerawork throughout. Classic paintings depicting the various scenes are interposed between movements and do not obstruct the presentation of the music. The audio is presented in superb 2-channel PCM stereo, and Dolby Digital and DTS surround options are also available on the disc. While there is no way to play the show complete (with interview and performance) without going back to the main menu, the authoring is otherwise clear and easy to navigate.

“The South Bank Show” went off the air in 2010, simultaneously with Bragg’s retirement. There have been rumors that the show will return., and with appreciations coming from as high as Prince Charles, there’s a possibility that a new “South Bank Show” will appear. Of course, that begs the question: With hundreds of channels on US cable systems, why can’t we have a similar arts show over here?