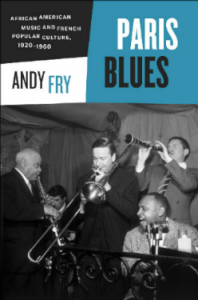 While on my first plane ride to Europe, I sat next to a stranger who had made several trips to and from the Continent. He seemed to delight in telling me how Americans are routinely abused in Paris, and that I should be prepared for insults and slights from any Parisian I met. Thankfully, I have experienced none of those attitudes during either of my two trips to France, and I found that Parisians were quite helpful, especially when I showed respect for their customs, attempted to speak French, and displayed the humble attitude of a visitor. In one particular case, a group of Parisians dining at a restaurant were extraordinarily cordial when they discovered that I was a jazz fan. Obviously, the quality of an American’s experiences in Paris is directly related to the way they act among the locals. As a white man whose visits were made in 2007 and 2009, my experiences cannot be considered accurate reflections of the experiences of black American musicians who visited Paris between 1920 and 1960. However, much of what has been reported about Parisian attitudes about jazz and African-Americans have shown that the French were very welcoming to both. Or were they? Andy Fry, who teaches in the music department of Kings’ College in London, thinks not, and in his new book, “Paris Blues” (University of Chicago), he offers numerous examples that French critics had neither a deep appreciation of the music, nor a full understanding of its creators.

Despite the subtitle, “African-American Music and French Popular Culture, 1920-1960”, “Paris Blues” is not a comprehensive study of the period. Rather, it examines five episodes from the Parisian music scene in exhaustive detail. Fry discusses the “revue Negrés” (black stage revues) from 1925-1937, the procession of white and black big bands in the 1930s, Josephine Baker’s 1934 appearance in a revamped version of Jacques Offenbach’s operetta “La Créole”, jazz during the Occupation (and supposedly Django Reinhardt’s role, although the guitarist’s activities during the war are barely mentioned), and Sidney Bechet’s residence in France during the 1950s. Fry bolsters his arguments with a thorough examination of the contemporary Parisian critics, particularly noting their disagreements and feuds. The racism of these critics spills out in nearly every quote, even when they were trying to be complimentary: André Levinson wrote Josephine Baker…is an extraordinary creature of simian suppleness….Thanks to her carnal magnificence and her impulsive vehemence, her unashamed exhibition comes close to pathos. …Dainty Florence Mills gives a sweetened travesty of this type of dancing. There is not the slightest trace of the wild thing in this rococo Creole. In another section, Fry completely decimates Ernest Ansermet’s famous early appreciation of Bechet by contrasting the Swiss conductor’s original 1919 article with some of his later (and terribly short-sighted) remarks about jazz in general. Another argument (which actually comes up twice in quite similar prose) is the claim that jazz was primarily a French invention. Most of this argument is nationalistic poppycock that was used to pacify the Nazis during the Occupation, but there is one element worth further examination: the claim that the word “jazz” came from the French word “jaser”, meaning chatter, babble or gossip. Considering the conversational style of jazz, this etymology makes much more sense as a description of the music than an obscure baseball term or a synonym for sex (although all three terms were probably used in New Orleans in the early years of the 20th century).

My problems with this book come from what is not here. There are no discussions of France’s introduction to jazz, the flood of American jazzmen who came to Paris in the mid- to late-30s (many coming specifically to play with Reinhardt), the American expatriate musicians who chose to live in Paris because of better race relations, or—most surprisingly—the reception of modern jazz in Paris. Fry purposely leaves out the 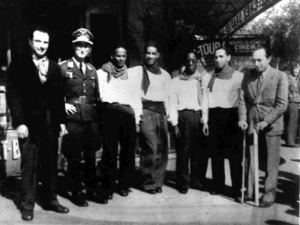 recollections of musicians because they have been reproduced in other books and he feels that they are unreliable because they are recollections made years after the fact. But much of the information provided by musicians is precisely the material Fry is trying to refute! Did Fry believe that including this information would weaken his own argument, and if so, did he stack the deck in his own favor? While I appreciate the research Fry has done in collecting a wide variety of critical opinions, I wonder how many Parisian jazz fans read this material at the time. Fry provides very little information about the French jazz audiences. A simple demographic would clear up many questions, such as their average age, social background and political leanings. Could we really expect a liberal French fan to read—let alone respect— the views of a conservative journalist?  And on the subject of the journalists and critics, I wish that Fry would have included a chart or an appendix listing all of the critics cited in the book, along with their backgrounds and political beliefs; I doubt that many jazz fans and historians know many of these French critics apart from Hugues Panassié, Charles Delaunay and André Hodeir. Finally, in the chapter about jazz and the Nazi occupation, Fry never really discusses the degrees of cooperation between French musicians, critics, the Vichy government and the Nazis. Later in the same chapter, he completely drops the ball by not fully discussing the implications and dangers of the infamous Reinhardt photo with four black musicians and German officer Dietrich Schulz-Köhn. Fry seems to think that this was no big deal in the atmosphere of the time, but suppose that the Gestapo had found that picture?

Lest I be accused of being too harsh to Mr. Fry, let me reiterate that I find his writing and research to be exemplary. Despite my misgivings about “Paris Blues”, he has shown that there is much work still to be done in clarifying the stories about the Parisian jazz scene of the past century. I have little doubt that he could uncover information that could change critical opinion about famous recordings and performances, just as he has done with the critical writings of Ernest Ansermet. He may not find a clear thesis to unify a comprehensive volume on the subject, but as I found when I visited Paris, the reactions you get depend on the approach you use.