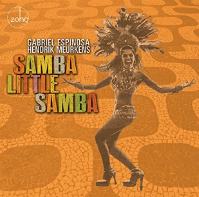 It’s a cliché to say that music is a universal language, but “Samba Little Samba”, the newest CD by Gabriel Espinosa and Hendrik Meurkens shows the truth inside that old maxim. How else can one explain a thoroughly delightful album of Brazilian sambas composed and/or performed by a Mexican bassist and vocalist (Espinosa), a Dutch/German harmonica and vibes specialist (Meurkens), an Israeli clarinetist and saxophonist (Anat Cohen), a Russian pianist (Misha Tsiganov), two American vocalists (Alison Wedding and Tierney Sutton) and a Hong Kong lyricist (Angelita Li)? The bouncy title track opens the album, and while Li’s lyrics aren’t terribly profound, the joyous melody and infectious groove creates a fine vocal duet for Espinosa and Wedding. Most of the songs do not have lyrics, and the versatile Wedding becomes a vital part of the horn section, blending and improvising with Cohen’s rich-toned clarinet on the ballad  “A Song for Ray” and Meurkens’ soulful harmonica on “Encuentro Maya” (which also includes a very effective recurring wordless melody sung in unison by Wedding and Espinosa). Sutton and the guitarist from her last two albums, Serge Merlaud, join the ensemble for the only piece not in samba style, “Besame Mucho”, where she and Espinosa sing the pop classic in both Spanish and English. Tsignagov’s “Give Me Five” is a challenging piece in 5/4 time which features a superb tenor solo by Cohen, and the rhythmic closer “Euro 12” includes brilliant drumming by Antonio Sanchez (who alternates with Adriano Santos on drums throughout the album). There’s been plenty of talk lately about jazz belonging only to blacks and samba belonging only to Brazilians, but “Samba Little Samba” proves those arguments wrong with its very existence.

tirely comprised oforiginal compositions. Written over several years (but apparently never recorded before), the songs are sequenced in an autobiographical arc with standards inserted at crucial points of the unspoken narrative. Hooker’s words pack a direct emotional punch—“Liitle Child” and “Hold On for the Light” are painfully honest reactions to a disintegrating family and a suicide—while her music covers a wide range of genres, from straight-ahead jazz through boogaloo and pop-styled ballads. Hooker has an edgy voice, but she delivers these songs with a unique mix of passion and restraint (although she wrote some of these songs in her twenties, her maturity truly enhances her interpretations). However, I don’t care for her renditions of songs by other composers: the phrasing on her version of “Both Sides Now” is very odd, breaking up words and upsetting the scansion in other places. And while I understand that “Here’s to Life” is a logical coda for a concept album like this, Hooker’s partly-talked, partly sung rendition doesn’t do the song any favors (This song truly belonged to Shirley Horn—it was written for her—and few singers, including Barbra Streisand, have been able to improve on Horn’s original recording). Hooker plays piano throughout the album (except on the instrumental “Shaman’s Call”, where she plays Native American wooden flute and drum). Her fine supporting ensemble includes violinist Dave Rimelis, guitarist Paul Meyers, bassist and cellist Mike Richmond, percussionists Vince Ector and Joe Cardello, and tap dancer(!) Jonathan Luks.

JUDI SILVANO: “MY DANCE” (JSL 10)
One of the most adventurous souls in vocal jazz, Judi Silvano’s “My Dance” is a collection of 11 original pieces, performed in duet with pianist Michael Abene. Th 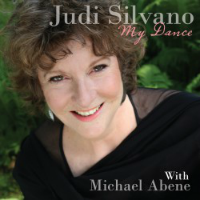 e main attraction of any Silvano performance is her peerless improvisations, so it shouldn’t surprise anyone to find that most of the compositions on this album are little more than wordless pieces of melody which provide the basis for her scat solos. The opening track, “Dust” is basically a recurring motive, and the title track is based on a single descending idea. Of the four songs with words, “Bougainvillea” is the only one with memorable lyrics. In describing a colorful plant, Silvano makes us feel its very nature: Fragrant breezes call you from the sea/Climbing flowers framing doorways captivate me. Yet, the wide, angular melody she applies to “Our World” enhances a rather commonplace (but still vital) lyric about preserving the environment. When Silvano starts to improvise, any concerns about the compositions disappear. Her remarkably agile voice lets her create great abstract patterns with daring leaps and intriguing note choices. Her extraordinary wide range allows her to make dramatic shifts in register without sacrificing vocal clarity (her spectacular improvisation on “Calypso” is a particularly fine example of this). Abene is an attentive duet partner, offering just the right mixture of support and contrast to make Silvano’s lines stand out. The music of Silvano and Abene makes few compromises to its audience, but those seeking something different from the usual vocal/piano duets will find much to enjoy with this album.