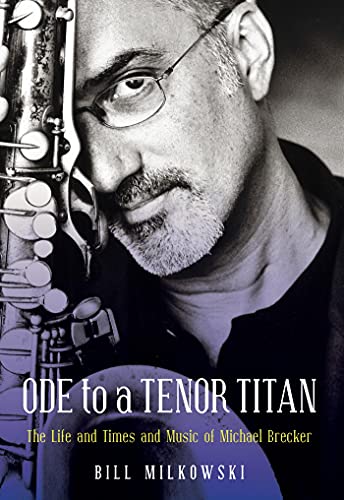 ODE TO A TENOR TITAN (by Bill Milkowski)

Elie Wiesel’s astute observation is especially relevant in understanding the attitude of traditional jazz critics towards jazz-rock fusion. Critical disdain for fusion was much more sinister than the old bebop/moldy figs arguments of the 1940s. In the late 1960s, as the hybrid style was just getting started, critics who disliked the music—or rock music in general—simply ignored it, refusing to examine the genre for its strengths and weaknesses or to recognize its major players. At a 1968 college jazz competition held at Notre Dame University, a combo from Indiana University—which had already been recognized for its excellence by the celebrity judges—was denied a first-place trophy because their closing concert included a version of Duke Ellington’s “Warm Valley” which included an extended free jazz improvisation by the tenor saxophonists and a long spontaneous jam on the final riffs from the rock anthem, “Light My Fire”. Within a few years, one of the Indiana tenor players would become one of the chief architects of the fusion movement. His name was Michael Brecker. 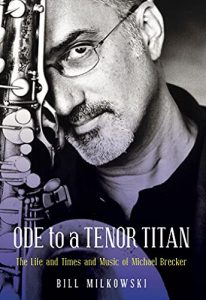 Over his career, Brecker amassed a huge contingent of followers and fans, but the old-school press paid little attention, despite Brecker’s overwhelming technical prowess, his easily recognizable instrumental voice, and his innovative manner of improvising. Above all of Brecker’s accused sins, he played and toured with pop and rock singers, and—rumor has it—he played commercial jingles! But can we really fault a musician for making a healthy living while plying his craft? Is that sufficient reason to deny Brecker’s legacy as one of jazz’s greatest artists? Most jazz history texts offer dozens of pages discussing giants like Coleman Hawkins, Lester Young, Dexter Gordon, Sonny Rollins, and John Coltrane. However, in the best circumstances, Michael Brecker barely rates a paragraph. I suppose we should be thankful for the mention, but it is high time that Brecker is recognized as one of the giants of jazz.

A good start to that goal is Bill Milkowski’s excellent new Brecker biography, “Ode to a Tenor Titan” (Backbeat). Milkowski has a unique vantage point: he knew Brecker for many years and was one of the rare jazz critics who recognized the value of Brecker’s playing at the time. One of the book’s most valuable assets is the detailed history of the fusion movement—specifically the music being created outside of Miles Davis’ leadership. We learn that the Brecker Brothers band would sometimes play as a group (though not usually credited that way) on the albums of other players and singers. We also get a few details about the numerous jingle sessions which featured Brecker and his fellow musicians (and, in one notable anecdote, how the payment for one of those sessions went to help a musician in need).

Milkowski’s experience and reputation allowed him access to many famous musicians who worked with Brecker, and who tell of their friend and colleague with stark honesty. First and foremost of these interviewees is Michael’s brother Randy, who provides lengthy and frank assessments of the brothers’ family life, the evolution of the Brecker Brothers band, their experience running a New York nightclub, Seventh Avenue South, and most notably, Michael’s lengthy drug addiction, and his full remission from addiction. The latter is the subject of the book’s most enlightening chapter “Those Perfect Eighth Notes”. For anyone who wonders why anyone would consider taking hard drugs, this chapter—primarily narrated by those who have lived through addiction—explains the attraction. All of the musicians take great care to note that they are not advocating substance abuse, but their vivid descriptions explain the experience (and perceived benefits) of narcotics. For this chapter alone, Milkowski’s book should be read by anyone studying music or drug addiction.

There is much more to celebrate in Milkowski’s book. Many of the recorded mileposts of Brecker’s career are discussed and Milkowski’s enthusiasm is likely to lead the reader to seek copies of these neglected albums. When Brecker makes a sudden or unexpected career move—as with his year-long-plus world tour with Paul Simon for the album “Rhythm of the Saints“—Milkowski does his best to explain the reasons for the saxophonist’s decision and the benefits of the experience. We discover Brecker’s love of practical jokes and sample some of his dry humor. We also learn about his deep connection to the musical community, and how he helped several well-known musicians kick their drug habits. Finally, there is the heart-breaking story of Brecker’s final years as he fought a rare form of leukemia. The well-publicized search for marrow donors was not enough to save Brecker’s life, but it finally made the critics take notice so that when Brecker did pass away in January 2007, he was not ignored but celebrated (Brecker’s gorgeous final album, “Pilgrimage”, released a few months after Brecker’s death, re-established the greatness of this loss).

If Milkowski’s book has one weakness, it is that it is aimed toward the general jazz audience. There are no technical discussions of Brecker’s solos, nor the innovations found therein. We are told that Brecker was expanding on late Coltrane ideas, but the specifics are missing. For example, there is a technique that Brecker perfected which is known among musicians as “side-slipping” or “side-stepping”. In its basic form, it involves taking an improvised melodic idea, and moving it up or down a half-step, and layering the new key on top of the old key to create tension. Of course, Brecker’s astounding technique allowed him to implement this concept at lightning speed, but the tension between the two keys was dramatic, no matter the speed. The full technique of side-slipping is much more complex than that—and some of the online discussions of it can cause a musician’s eyes to glaze over—but a discussion of the basic concept deserved inclusion in this book. Those musicians who wish to explore side-slipping can easily spot it in Brecker’s solo transcriptions (look for an idea that repeats with lots of accidentals). For listeners, there are plenty of recordings, including the example below. It is a live performance by Chaka Khan of Dizzy Gillespie’s “A Night in Tunisia” (the video title refers to the lyricized version). The style is basically pop with a few jazz touches thrown in, but when Brecker takes over for his solo at 2:00, he creates a stunning solo with a fine example of side-slipping at 2:58. That’s Randy Brecker standing next to his brother, and while his solo is not as innovative as Michael’s, it certainly shows that Randy has a distinctive voice and style on the trumpet. There’s no denying that both brothers treat this music with the same overwhelming passion that marked their original music. If this was a crime against jazz, who was the victim?

Like many jazz giants, Michael Brecker died much too young, but he left a rich legacy of music. The immenseness of his discography was once joked about by his bandmates, but retrospection allows us to see its value. Bill Milkowski’s book offers a gateway to exploring Michael Brecker’s phenomenal talent and his jaw-dropping innovations. We don’t need any further historical distance to prove Brecker’s stance as a jazz icon. He deserves the same recognition as the tenor giants who preceded him. “Ode to a Tenor Titan” goes a long way towards rectifying this issue.

The video recording embedded in this article is presented for educational and illustrative purposes. Jazz History Online neither owns nor controls the rights to these recordings. All rights belong to the original copyright holders.