It could be said that Bill Charlap has New York running through his fingers. He is a native son of the Apple, born to composer Moose Charlap and vocalist Sandy Stewart, and his trio, which he formed in 1997, is one of the mainstays of the New York scene. Charlap’s new CD, “Notes from New York” (Impu 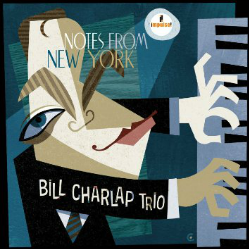 lse 24830) collects nine songs with various—if occasionally tenuous—connections to the city. Yet the driving undercurrent of this compelling music speaks to the tough exterior of New York, while Charlap’s feathery touch speaks to the deeply guarded heart of the average NYC resident. On “I’ll Remember April”, Charlap’s solo bubbles with understated intensity, and in “Not a Care in the World”, the deeply swinging groove brings out a sparkling piano chorus, rich-toned bass (Peter Washington) and crackling drums (Kenny Washington). Because this trio has worked together for so many years, their communication is nearly telepathic. “There is No Music” (an unaccountably rare Harry Warren/Ira Gershwin collaboration) features a dialogue between piano and bass where the lines weave together with remarkable clarity. But this is truly a three-way dialogue, and Kenny Washington’s masterful adaptation of his brush patterns comment on the melodic lines without interfering with them. Moving to a more familiar theme, Charlap’s trio finds a new way to navigate Harold Arlen’s beloved “A Sleepin’ Bee” with a solo piano rendition of the verse that modulates to unexpected keys, and a medium-up treatment of the chorus that is edgy but not brittle. No matter if the material is obscure or well-known, Charlap makes the music compelling, as with the unusually shaped solo phrases on Thad Jones’ “Little Rascal on a Rock”, the brief descending line that accompanies “Tiny’s Tempo”, the subtle but penetrating dissonances he inserts into the left hand harmony on “Too Late Now”, or his surprisingly reflective solo version of “On the Sunny Side of the Street”. This superbly programmed and elegantly played album is another sterling entry in Charlap’s  impressive discography.

The members of Steve Kuhn’s trio have also have a long history together. Steve Swallow played with Kuhn in the Art Farmer/Jim Hall Quartet back in the mid-1960s, and Joey Baron recorded with Kuhn and Swallow on a 2011 ECM album called “Wisteria”. However, the astounding energy of their newest 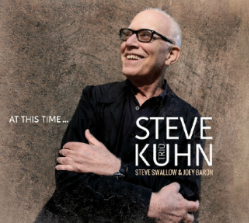 collaboration, “At This Time…” (Sunnyside 1436) comes because they went into the studio after a successful three-night engagement at Birdland. The unrelenting power of this trio explodes through the speakers on their bright-tempoed version of “My Shining Hour” and the intensity continues through the medium walk version of “Ah Moore” and the shuffle-samba arrangement of the theme from “The Pawnbroker”. Baron is regarded as a dependable spark plug, but the superb engineering by Katsuhiko Naito brings out the subtleties in Baron’s cymbal and brush strokes. And while the electric bass is not supposed to have any sound decay—the actual tone is made by the amplifier—Swallow obtains a rich sound that gives extra lift to his outstanding solos and supremely-crafted walking lines. On his original “All the Rest is the Same”, Kuhn derives the benefits from the volcanic energy generated by Swallow and Baron, as he performs an exuberant solo where the phrases seem to leap in midair. Kuhn’s sensitive side appears on another original “The Feeling Within”. Performed solo, Kuhn takes great liberties with tempo and lets the melody and harmonies flow out of his instrument. His tone retains some of the edge from the trio performances, but his discreet use of the pedal removes some of the impact.  When the trio returns, they show that they are equally effective at quieter moods. Most of the attributes are still present—Baron’s brushes under Swallow’s solo on “Lonely Town” are simply exquisite!—but all at a lower level. Kuhn, Swallow and Baron have developed a superb group dynamic, and they should record again soon and often.

Brooklyn-born Leslie Pintchik’s music sneaks up on the listener with understated concepts rather than dazzling the audience with pyrotechnics. On 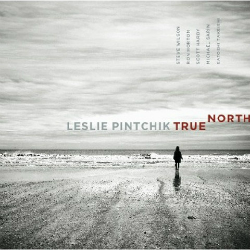 her new album, “True North” (Pintch Hard 3) she continues the impressive journey from her previous album, “In the Nature of Things”. Using the same band as before (trumpeter Ron Horton, saxophonist Steve Wilson, bassist Scott Hardy, drummer Michael Sarin and percussionist Satoshi Takeishi) she uses the horns as backgrounds for her understated but compelling piano solos, and then adds their solo voices when they can enhance the settings. On the opening “Let’s Get Lucky”, her insinuating piano solo carries most of the track, but after she brings her own improvisation to a satisfying conclusion, Horton and Wilson come in for an increasingly raucous set of exchanges that take the energy level up a notch. Likewise, it is Wilson’s emotional alto solo that caps “Tumbleweed”, but the solos of Horton and Pintchik build the piece to a level where Wilson’s improvisation can best serve the music.  And since the climax of a piece does not always need to appear at the end of the piece, Wilson’s riveting soprano sax is positioned in the center of the solo sequence on the album’s evocative title track. On five of the ten tracks, the horns lay out and the rhythm section displays a subtle approach to polyphonic dialogue. In effect, it is the opposite approach from the Charlap and Kuhn trios; here, it is almost like the musicians are trying to stay out of each other’s way rather than creating an active musical conversation. Yet, they still create a cohesive sound that relies on a feeling of space, even when there are not silences inherent in the music. While the rhythm section is equally adept at playing a straight-ahead jazz groove—as on “Falling in Love Again”—it is their oblique approach to group interaction that gives this album its special flavor.  Pintchik is not nearly as famous as her talent deserves; “True North” shows that her work is overdue for wider recognition.