It might seem unfair for any vocal jazz group to be the opening act for the Swingle Singers. No matter how advanced the opening act may be, the Swingles simply raise the bar when they take the stage. For example, at the opening night concert of the Greeley Jazz Festival, the opening act was the University of Northern Colorado’s top vocal jazz group, the Northern Colorado Voices. Simply put, this was one of the finest college groups I’ve ever heard, featuring outstanding ensemble and solo singing. Yet the jaw-dropping performance by the Swingles displayed the endless possibilities of the human voice and showed new directions for ensemble singing. Naturally, there was nothing malicious about the concert programming; it was simply the case of each group bringing their very best music to the stage.

Under the direction of Kerry Marsh, Northern Colorado Voices sang a six-tune set which effectively displayed the best traits of current vocal jazz ensembles. The group featured 12 singers, occasionally vocally augmented by Marsh or his exceptionally 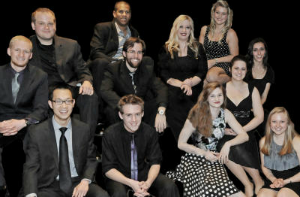 talented spouse, Julia Dollison. They opened with an energetic setting of the Bob Dorough “Schoolhouse Rock” theme “5-10-15”, then revisited a latter-day Gene Puerling classic “One More Time, Chuck Corea”. After Dollison sang a heartfelt version of the standard “If I Should Lose You”, Marsh joined the group for his profoundly swinging arrangement of “What Is This Thing Called Love”. After a stunning pair of scat solos—the first accompanied by vocal percussion sung by Marsh and one of the students—the group launched into a beautifully finessed ensemble chorus. For years, vocal groups have modeled themselves after big band saxophone sections, but few of those groups incorporate the subtle changes in dynamics which enliven big band shout choruses. Clearly, Marsh has taught these students that there’s more to music than just reading the notes. Next, the group effortlessly handled the numerous modulations in Marsh’s setting of “Emily” before closing with a powerful version of Alanis Morissette’s “Uninvited”.

A few minutes later, the Swingle Singers opened their first set with two selections from their soon-to-be-released 50th anniversary album. Edward Randell’s superb original “Swim” segued into Clare Wheeler’s emotionally-packed “Piper”. I’ve had the opportunity to hear the recording of “Piper” and I noticed that the arrangement has already been modified for live performance. The live arrangement has a very strong introduction which gives the already intense song a better starting point. Wheeler’s searing lead vocal and the sharply accented background packed such an emotional wallop that it was surprising to hear it so early in the program. Wisely, the group mixed these progressive works with some of their older arrangements. The Turkish ballad “Gemiler Giresune” has been an audience favorite since it was introduced a couple of years ago. Kevin Fox’s skillful arrangement maintained authenticity while adding a contemporary edge. Next, the group jumped styles again with a cover of British pop singer Elbow’s “Weather to Fly”. The vocal percussion effects usually sung by Fox and Randell were spread throughout the ensemble, but one could hardly hear any difference when the percussion effects moved between tenor Christopher Jay and soprano Joanna Goldsmith-Eteson. A sprightly rendition of a Corelli Concerto Grosso led to a delightful improvised blues with Fox and Randell alternating between solo and rhythm section roles. Acknowledging the Swingle Singers’ historic role as a “Bach cover band”, the group sang a superbly articulated version of the master’s G minor Little Organ Fugue, and the group went to intermission with Sara Brimer’s hilarious opera spoof of the mad scene from “Lucia Di Lammermoor”.

Except that it really wasn’t an intermission. Even after the house lights went up, the audience—many of whom had obviously never heard the Swingles in person before—thought that the show was over, and they started a cadenced clap to bring the Swingles back to the stage. Less than four minutes after they had gone backstage, the Swingles returned to sing the second h 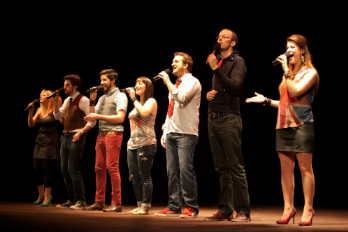 alf of their concert (Of course, all of this confusion could have been avoided with a simple stage announcement). They resumed with a lovely new piece arranged by Goldsmith-Eteson called “Two Sisters”. This work sets a modern love poem against Bach’s “Qui Respexit” (from “Magnificat”) and it effectively combines the old and new Swingle musical worlds. I expect that it will soon become a staple of the Swingle repertoire. Oliver Griffiths’ soulful high tenor enriched the Mumford and Sons hit “After the Storm”, which was followed by a new original by Goldsmith-Eteson called “Wonderland”. The background of the latter piece featured a rich palette of cross-rhythms, but it was hard to hear Goldsmith-Eteson’s lead vocal over the top. It will be interesting to hear how this piece evolves over time.

While it would be difficult to imagine a Swingle Singers concert without Bach, it’s almost as hard to imagine one without Debussy’s “Clair de Lune”. Ward Swingle wrote his classic arrangement of this piece in 1980, and it has regularly appeared in Swingle concerts since then. I’ve heard several editions of the Swingles perform this arrangement on recordings and in concerts, but never as wondrously as in the Greeley concert. They approached this piece delicately, giving it the same care as a piece of fine crystal. The highly exposed lines were sung with utmost precision, and the nocturnal mood was never broken. Their pianissimo singing was simply exquisite and the very enthusiastic audience clearly appreciated this piece as much as the lively up-tempo songs. As the concert neared its close, the Swingles gradually rebuilt the intensity beginning with “Couldn’t Love You More”, where Randell displayed his astonishingly wide vocal range. Jay sang a fine solo on “Burden” on which the audience of vocal jazz singers and instructors were invited to sing a rather complex background vocal line. Then the group closed the main part of the concert with Astor Piazzolla’s “Libertango”. In earlier performances, members of the group danced the tango during this number, but now the group starts the song seated in a semi-circle. A series of rhythmic knee-slaps and foot stomps explained the reason for the change in choreography, and in the final chorus, the group stood once again to deliver the slashing final ensemble accents to the audience. The standing ovation that ensued was natural and heartfelt, and the encores were the sassy Beyoncé hit “Single Ladies” (aptly retitled “Swingle Ladies”) and the subdued Beatles medley of “Blackbird” and “I Will”.

If there is wisdom in having a student group open for the Swingle Singers, it is that the Swingles’ progressive music can be a beacon of inspiration, both for the singers who preceded them onstage, and those seated in the audience. The Swingle Singers have the benefit of longevity—the current group has been together for about two years and several members have been in the group for over five years—whereas the typical college vocal jazz ensemble sings together for a semester or two before swapping out members. If a college group can retain a core group of its best singers, conceivably it could continue its growth over an extended period. It then comes down to the creativity of the singers and their leaders to determine which new directions to explore. It is high time that vocal jazz ensembles evolve past the models of half a century ago. As the Swingle Singers now demonstrate, it is equally important to honor the past as it is to explore the future.