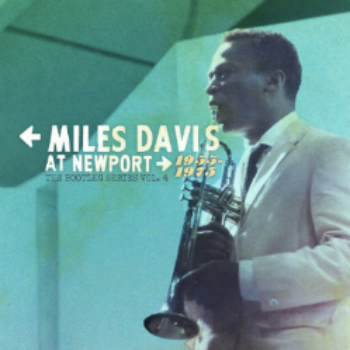 On the opening track of the new 4-CD box set, “Miles Davis at Newport, 1955-1975”, Duke Ellington introduces Miles Davis and his fellow modern jazz musicians as “gentlemen who live in the realm that Buck Rogers is trying to reach”. Ellington’s jest makes it sound like bop was something undecipherable, but anyone who had followed the development of modern jazz over the previous decade could easily comprehend the music Davis played at his first Newport appearance in 1955. Ellington’s remarks were probably more prophetic than he realized, for it was the music Davis made some 14 years later that alienated many of his jazz fans. While Sony Legacy’s collection presents Davis’ Newport Jazz Festival performances in more-or-less chronological order (the exception is noted below), we can learn more about this music by examining it in reverse chronological order, discussing the least familiar material first and evaluating how these later experiments stand up today.

Davis’ 1975 band is represented by a single track, “Mtume”, recorded on July 1 at New York’s Avery Fisher Hall. In a recording that sounds like it made by a fan in the audience rather than by a professional group of sound engineers, Davis’ trumpet sounds lost in the fog of percussion and electronic instruments. James Mtume Forman and Al Foster start the performance with an array of cowbells, drums and congas before the groove is set by the guitars of Pete Cosey and Reggie Lucas and the electric bass of Michael Henderson. Davis plays a fairly short solo, but his arresting use of space and searing ideas are every bit as distinctive as they were 20 years earlier. Only Davis’ use of a wa-wa pedal and the period background truly dates this music; Sam Morrison’s tenor sax is rooted in mid-period Coltrane (with touches of Albert Ayler) and it’s too bad that so little was heard from him in the succeeding years. By the end of the year, Davis’ health issues forced him into what became temporary retirement.

It’s hard to judge the 1975 group by a single track, but based on the representation on this box set, it seems that the later group was much more accessible than Davis’ 1973 band. Their set, recorded in Berlin on November 1, displays their extremely dense sound. Again, the sound quality is not the best, and it’s not easy to discern the different instruments in the band. On the opening section, titled “Turnaroundphrase”, Dave Liebman’s saxophone is distorted (possibly through a electronic setup) so that at times it sounds like one of the guitars. The thrashing guitars of Cosey and Lucas are placed in direct and simultaneous opposition to each other, Henderson, Foster and Mtume all seem to be working independently rather than together, and Davis is clearly blowing at top volume just to be heard over the rest of the band. The wall of sound finally gives way in a track called “Ife”, where Liebman’s flute (and later his soprano sax), Davis’ electric trumpet and one of the guitarists are featured over a lean rhythm section riff. The background becomes more agitated for an untitled original, and while the band uses sudden stops effectively, the overall effect of this set is a general assault on the ears.

The October 22, 1971 performance has several qualities that could appeal to Davis’ jazz fans. While the music is certainly based in the rock and soul music of the time, there is a jazz sensibility that runs deep within all of the music. The instrumental roles are much clearer than in Davis’ later bands, and the group flows between moods in the same effortless way as the mid-sixties quintet. Instead of the sudden stops of the 1973 group, the 1971 band creates gradual dynamic shifts which maintains the music’s fluid nature. Davis and Keith Jarrett have spirited musical conversations throughout the set (and a remarkably lyric episode on the first version of “Sanctuary”), Gary Bartz’ rich tone and long bluesy lines on soprano and alto saxophones offer further contrasts to the electrified sounds of Davis, Jarrett and Henderson, and Ndugu Leon Chancler’s crisp drumming gave the rhythm section a cleaner, open sound than the later groups. Most of the music the band played at this concert in Switzerland was from the “Bitches Brew” and “Live/Evil” albums and the band sounds very comfortable with these pieces, enabling them to turn them into fresh experiences every night. The 26-minute version of “Funky Tonk” displays a wide range of sounds, from a soft mysterious introduction, through expressive solos by Bartz and Jarrett, and climaxing with an extended solo by Davis. And while Jarrett has said on many occasions that he didn’t like playing electric piano, this recording shows that he was able to transmit his exquisite touch and sensitivity through the Fender Rhodes. Although this concert is placed in its entirety on the fourth disc due to CD time limitations, as the strongest of the rock-inspired performances, it is an excellent conclusion to the set.

Although it was still billed as the Newport Jazz Festival, the 1969 event featured several rock groups, including Led Zeppelin, Jethro Tull, Sly and the Family Stone and the Mothers of Invention. The audience might not have known what to expect when Davis took the stage in Newport on July 5. In contrast to his later groups, Davis was only fronting a rhythm section: Chick Corea, Dave Holland and Jack DeJohnette (Apparently, Wayne Shorter was stuck in traffic and missed the gig). “Bitches Brew” would be recorded six weeks later, and Davis was clearly working out this material in front of the festival audience. The four musicians generate a lot of energy, but the style is a kind of super-charged jazz: the sequence of solos are clearly defined with none of the non-verbal conversations that highlighted the 1971 set. Moreover, this band acts like a jazz quartet, playing designated roles as clear-cut as in Davis’ late 1950s quintet. Miles plays open horn without electronics, although Corea is playing electric piano, his comping is not far away from the style he would have played on acoustic, DeJohnette is certainly as propulsive as on a straight-ahead jazz date, and—although I can’t be sure—it sounds like Holland plays acoustic bass for at least part of this set. Miles even closes the set with a bit of “The Theme”! By the way, this set has been issued previously by Legacy as part of “Bitches Brew Live”.

The July 4, 1966 and July 2, 1967 sets by Davis’ second quintet (Shorter, Herbie Hancock, Ron Carter and Tony Williams) occupy the second disc of the set. In many ways, the 1966 set is a throwback to Davis’ live albums from earlier in the decade. Half of the tunes are from Davis late 50s-early 60s repertoire and they are subjected to the same tempo extremes as on those earlier concerts: ultra-fast swingers and very slow ballads. However, this band had mastered the art of spontaneous change: they could switch tempos and styles with ease, and it is a genuine surprise when the trio takes up a lightning-fast tempo in the middle of “Stella by Starlight”; to his credit, Davis picks up the ball and runs with it! Jimmy Heath’s “Gingerbread Boy” opens both sets and the differences between the two versions are dramatic: the 1966 version was made before the studio recording on “Miles Smiles” and the horns play closer to the original theme than on the LP; the 1967 theme is quite fractured in comparison to both the live and studio versions. And while the rhythm section added a funky backbeat to parts of the 1966 live rendition, most of the 1967 version swings with untamed ferocity. The intensity continues through a haunting version of “Footprints”, a highly abstract reading of “Round Midnight” and a burning take on “So What”. A few months later, Newport producer George Wein booked the Davis quintet for a tour of Europe; recordings of the tour are available in the first volume of this “Bootleg Series”: “Live in Europe, 1967”.

The July 3, 1958 Newport performance is well-known to Davis’ fans, as it has been available in one form or another since 1964. This set features the same personnel that would record “Kind of Blue” the following spring: Cannonball Adderley, John Coltrane, Bill Evans, Paul Chambers and Jimmy Cobb. However, the repertoire primarily harkens the past, with versions of “Ah-Leu-Cha”, “Straight, No Chaser”, “Two Bass Hit” and “Bye Bye, Blackbird”. The only piece that this entire group had recorded in the studio was “Fran-Dance”, which had been cut about six weeks earlier, and that work and “Blackbird”—which benefited from Evans’ lovely comping—were the only representations at Newport of the sublime lyricism this band would accomplish. Naturally, the band plays all of the tunes with great conviction and energy, but it’s strange to witness Davis and his musicians recreating past triumphs instead of pointing the way to the future. This is particularly noteworthy in the context of this boxed set, where Davis’ initial appearance at Newport (July 17, 1955) is included on the same CD. On that performance, Davis displayed a new maturity that garnered him renewed respect in the jazz world and a contract with Columbia Records. Davis claimed that he wasn’t playing any differently than usual, but the recorded evidence shows that he was playing with more poise and greater intensity than ever before. The set was billed as an all-star jam session because none of the horn players (Davis, Zoot Sims and Gerry Mulligan) or pianist Thelonious Monk had a working band at the time (as part of the Modern Jazz Quartet, bassist Percy Heath and drummer Connie Kay were the only band members with a continuing gig). Despite the excellence of the other musicians, Davis commands our attention with his poetic solos on “Hackensack”, “Round Midnight” and “Now’s the Time”. Of these three pieces, only “Round Midnight” has been issued before, on the Legacy 2-CD edition of “Round About Midnight” and as part of a various artists set, “Happy Birthday, Newport”.

I suppose some jazz purists will avoid the present set because of the rock-inspired concerts on the last two discs, but as I’ve noted, all but the 1973 concert are quite accessible to open-minded jazz fans (and how can you be a Miles Davis fan if you’re not open-minded?) Many fans stopped listening to Davis around the time of “Bitches Brew” and that is a disservice to Davis’ legacy. His later period music may not have been as timeless as “Kind of Blue” or “Sketches of Spain”, but all of his music is worth exploring. He was still a great musician, regardless of the surroundings.