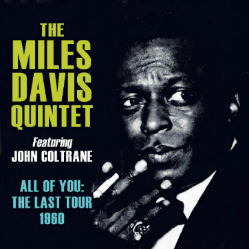 One of the problems with leading a jazz group is that when the sidemen become famous, they leave to start their own groups. In early 1960, Miles Davis was in just such a predicament. Cannonball Adderley, Bill Evans and John Coltrane had all left his sextet to become leaders. Coltrane was the last to leave, and with the release of his seminal album “Giant Steps”, the saxophonist was choosing players for his new quartet. Davis had hired Jimmy Heath as Coltrane’s replacement, but Heath couldn’t travel due to parole regulations. Davis’ quintet was scheduled to tour Europe as part of Norman Granz’s Jazz at the Philharmonic package and rather than trying to bring a new saxophonist up to speed on the repertoire, Davis convinced a highly reluctant Coltrane to rejoin the band. Although this would be Coltrane’s first trip to the Continent, he wasn’t happy or excited about the trip. According to Davis, He grumbled and complained and sat by himself all the time we were over there. European fans and critics weren’t sure what to make of Coltrane, either. He was trying to push boundaries in his solos, using multiphonics or stacking arpeggios to imply three chords at once. Coltrane didn’t always find the solutions he—or the audience—sought, and he was openly booed during the tour’s first concert in Paris. Davis had to revise his music as well. He had played versions of his most famous tunes in concert before, but on this tour, the tunes were much longer (mostly because of Coltrane’s exploratory solos) and as the tour progressed, the tempos were significantly faster than on the original recordings. Many of the European concerts by the Davis quintet were broadcast on radio, and recordings of those broadcasts have been bootlegged for years. Acrobat’s new 4-CD set, “All of You: The Last Tour” collects concert recordings from Stockholm, Copenhagen, Frankfurt, Munich, Zurich and The Hague, and ties the package together with an exemplary 32-page liner note essay by British saxophonist Simon Spillett.

The first Stockholm concert (March 22, 1960) is one of the more sedate sets in the box. The tempos stay fairly close to the original versions, and Davis plays finely-sculpted solos on “So What”, “Fran Dance” and “All Blues”.  Coltrane (perhaps a little hesitant after the Paris incident two days earlier) is slow to start his experiments, and it is only on the final track that he adds multiphonics. Wynton Kelly’s solos sparkle with bright grooving lines, while Paul Chambers and Jimmy Cobb create buoyant, dancing backdrops (Chambers’ subtle variations on the “All Blues” bass line are a constant delight!). When the band took the stand for the second show, the music was more fiery, with Coltrane basically picking up where he left off in the previous show. He explores several ideas, but in a situation repeated several times in these recordings, Coltrane hits a creative wall, and has a hard time finding a way over or around it. Coltrane was consciously trying to push his music into unknown regions, while the rest of the band (including Davis) seemed willing to let those changes happen naturally in the course of their improvisations. As a result, Davis and the rhythm section are much more relaxed as they play. “On Green Dolphin Street” starts with a Davis solo that skips along with Chambers’ bouncing bass lines. Coltrane’s solo changes the mood considerably: he gets so wrapped up in repeating and developing motives that the sprightly backup by the rhythm section becomes an afterthought, rather than an integral part of the performance (in contrast, the Copenhagen version of this tune finds Coltrane completely in sync with the rhythm). On Davis’ magnificent solo on “Walkin’” , he plays a phrase that was later part of his 1980s composition, “Jean-Pierre”; Coltrane’s solo effectively contrasts his hard bop style with his then-current explorations. Acrobat also includes the oft-quoted radio interview with Coltrane between the two Copenhagen sets. The concert from two nights later in Copenhagen has only three selections, but the highlight is a kicking version of “So What” with Davis shining whenever Kelly drops out, and great interplay between Coltrane and Cobb during the tenor solo. Other standout moments include Chambers’ resourceful arco solo on “Green Dolphin” and a dramatic Kelly solo on “All Blues”.

By the time the Davis quintet arrived in Frankfurt on March 30, the members were barely speaking to each other. However, the music became more focused and quite passionate. Apparently, the German audiences were particularly wary about Coltrane’s contributions, but to the saxophonist’s credit, his solo on “So What” contains some of his best playing of the tour, loaded with confidence and forward motion. Davis’ lines dance over Cobb’s brushes on “All of You”, but Coltrane’s solo gets hung up with a bunch of repeated motives. The Munich concerts of April 3 start with an inspired Davis solo on “So What”—he clearly enjoyed playing with this great rhythm section. Both hornmen point towards their musical futures on this concert: Coltrane with a wonderfully focused solo on “So What” that sounds like his Village Vanguard recordings of the following year, and Davis with a remarkable distillation of the Monk theme on “Round Midnight” which foreshadows abstract ballads like the 1964 “My Funny Valentine”. The first set closes with a thrilling version of “Walkin’” with superb solos by Davis, Coltrane and an abbreviated spot by Kelly (The piano is severely off-mike on the Munich concerts, but Acrobat’s engineers have done a magnificent job in restoring the sound). The sole surviving track from the second Munich concert is another version of “So What”. It stands up well by itself, but pales in comparison to the version recorded earlier in the evening.

The final two concerts in the set were recorded in Zurich and The Hague on April 9 and 10, respectively. The Zurich performance opens with a swift version of “If I Were a Bell” featuring Davis’ brilliantly conceived lines over the cooking rhythm team. Coltrane’s solo is technically impressive, but lacks overall direction. Kelly parodies Coltrane’s endless motive repetitions at the beginning of his solo, but the pianist holds our interest by making the idea swing. The combination of Kelly’s menacing chords and Davis’ subsequent note choices make this rendition of “Fran Dance” sound more sinister than a version recorded in Copenhagen just two weeks earlier. The Zurich versions of “So What” and “All Blues” are my favorites of the set. “So What” has melodic Davis, expansive Coltrane and driving Kelly solos, while “All Blues” features a long, mourning statement by Davis, a Coltrane solo which recalls his improvisation on “Kind of Blue”, and a solo from Kelly that lightens the mood with its brilliant single lines. The performance from the Kurhaus in Scheveningen (near The Hague) is probably the most bootlegged of all the concerts on this set. It includes Coltrane’s eight-minute solo on “So What” which collects many of the concepts he had been working on during the tour, Chambers’ virtuosic opening solo on “Walkin’” (which he played on a borrowed bass!), and another brilliant abstraction of “Round Midnight” by Davis (with outstanding support from the rhythm section). Although the Davis played one more concert in Amsterdam a few hours later, the Kurhaus concert is a suitable finale to the Acrobat set.

When Coltrane left Davis at the end of the European tour, it signaled significant changes for everyone in the band. While Coltrane became a towering force in avant-garde jazz, Davis struggled to find a new direction. Sonny Stitt, Hank Mobley, George Coleman and Sam Rivers served as temporary replacements for Coltrane, but eventually Coltrane’s original suggestion, Wayne Shorter, took the permanent spot. The Kelly/Chambers/Cobb rhythm section stayed in the Davis group for a couple of years, but eventually gigged as a separate unit, backing artists like Wes Montgomery and Joe Henderson on memorable live recordings. Even after Davis had formed the nucleus of his 1960s quintet, he continued to play concerts like the ones on the European tour, playing faster and more abstract versions of his 1950s repertoire. Thus, the importance of the 1960 European concerts can hardly be overstated. I suspect that most Davis and Coltrane fans already have some of these recordings in their collections. However, I recommend that they purchase the Acrobat set for the improved sound and for Spillett’s meticulously researched liner notes. It is an attractive set, reasonably priced, and it holds a wealth of timeless music.