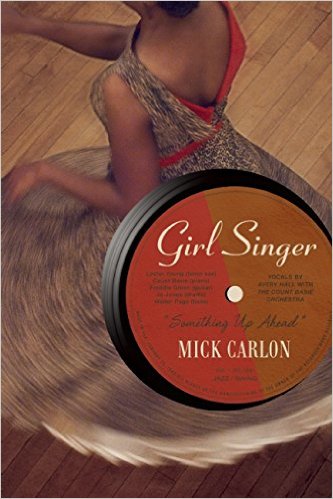 Mick Carlon is a man with a mission. He wants to introduce teenagers and young adults to the wonders of classic jazz. Those seventh-graders who attend Carlon’s English class at Barnstable Intermediate School in Massachusetts learn about the music while they learn about great literature. Carlon recommends that each student purchase a copy of Miles Davis’ “Kind of Blue” with the promise that Carlon will buy the album back if the student doesn’t love it (over the years, only two students have asked for a refund). However, Carlon is not satisfied to convert a few dozen local students each semester; he wants to spread the word about jazz to students all over the globe. To achieve that lofty goal, he has written a series of novels which juxtapose his adolescent fictional characters with remarkably accurate portrayals of jazz masters from years ago. His first two books spotlighted Duke Ellington and Louis Armstrong (you can read my reviews of those books here), and his newly published third novel, “Girl Singer” (Leapfrog) introduces young readers to Count Basie, Billie Holiday, Jimmy Rushing, Lester Young, Herschel Evans, Buck Clayton, Harry “Sweets” Edison, Dickie Wells, Freddie Green, Walter Page and Jo Jones through the eyes of Carlon’s fictional heroine, Avery Hall.

At the novel’s outset, Avery is 19 years old, working at a diner in Harlem, and singing in clubs on the side. One morning, Lester Young comes in for breakfast, and he recognizes Avery from her club performance the night before. Lester decides that Avery would be a fine replacement for the band’s recently departed singer, Billie Holiday. After a meeting with Basie (but not an audition—apparently, Lester’s word is good enough for the boss), Avery sings her first gig with the band at the Savoy Ballroom, wearing a gown loaned to her by Billie. Both Billie and Ella Fitzgerald are at the Savoy that night to encourage Avery’s performance, and after the gig, Avery and the band board the bus for a tour of the south. All of this dramatic action occurs within the first 30 pages of the book, and if Carlon can be criticized for an abundance of star encounters and coincidences, he only does so to introduce his readers to as many jazz greats as possible. As the novel progresses, we discover the distinctive personalities of the musicians: Basie is a soft-spoken man who becomes Avery’s father figure; Young is the gentle creative soul who retreats into his own world to avoid unpleasant situations; Jones is the itinerant preacher who speaks of jazz as a noble calling; and Evans is the strong but sensitive man who becomes Avery’s guardian angel.

Carlon could have just written an entire novel about Avery’s adventures with the Basie band, but midway through the novel he adds an important character which changes the direction of the book and adds a significant subtext. After Avery leaves the Basie band, she settles in Greenwich Village. There she meets a neighbor, Karl, a Jew from Germany who survived a stay in Dachau, and lived in Shanghai for several years before immigrating to the United States. At first, the black Avery has little use for the older white man with the German accent. It is when Avery learns his story that she realizes that she and Karl have both suffered because of their race. When the two fall in love, their troubles in 1940s New York get worse with a violent episode that nearly kills both of them. Fitzgerald appears at Avery’s hospital bed, and offers a means to escape. Later, Young turns up to encourage a further exile. While I wish that Avery and Karl would have confronted racism rather than moving away from the problem—Carlon could have tied in the civil rights movement quite easily—the book’s protracted conclusion tells of places where people are judged by their character and not their skin color.

While Carlon’s books are designed for young readers, they are also recommended for adults. In particular, the parents of teenagers assigned to read this book should also take up the volume. The issues Carlon raises are valid and contemporary, and the descriptions of the music and the musicians should encourage active listening sessions. For those adults without adolescents in the house, Carlon’s books offer easy-to-read narratives with finely-crafted portrayals of the jazz giants. Like Jo Jones and many others before him, Carlon has found a unique way to spread the gospel about jazz. May his work inspire new generations of jazz fans!