May 13, 2017 was a rare night for Denver jazz fans. They had the choice to hear several top-rank artists in live performances across the city. I do not know the attendance figures for Dianne Reeves’ concert with the Colorado Symphony, nor Anat Cohen’s gig at a local nightclub, but about 1000 fans packed the University of Denver’s Newman Center for a concert by the Branford Marsalis Quartet with special guest Kurt Elling. The “special guest” designation for Elling was really a misnomer: Elling was an integral part of the group, and truly functioned as a co-leader with Marsalis, as 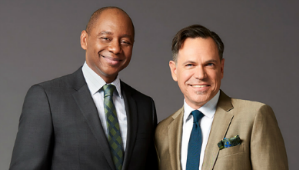 the two men made on-stage announcements and were the primary soloists all evening. Marsalis and Elling’s tour was in support of their recent Okeh CD, “Upward Spiral” (reviewed here) and they brought the same band as on the album: pianist Joey Calderazzo, bassist Eric Rivas and drummer Justin Faulkner. The group played for just over two hours without an intermission, despite the usual issues with Denver’s thin, dry air (Marsalis quipped, “Next time, I’m going to send my reeds here a month ahead of time.”)

The instrumentalists took the stage first, playing an unannounced piece based on a short melodic idea. Marsalis and Calderazzo based their solos on that same motive, creating fascinating new melodies. It soon became difficult to hear whether they were stretching the harmonic foundation. That was because every time that Faulkner would play full-out, his drums obliterated every sound on the low end of the spectrum—including Rivas’ bass. The blame is not on Faulkner:  the Newman Center’s stage emits a considerable roar when flooded with low frequencies. There were no baffles surrounding Faulkner’s drum set, and only a piece of carpet separating the bottom of his kit and the hardwood floor. The sound system didn’t help either: Rivas’ pickup was far from ideal, and the drums doubtlessly bled into Rivas’ microphone. It is unreasonable to expect an artist to compensate for sound issues that are beyond his control. Unfortunately, it is the audience that suffers.

Elling took the stage for the next tune, “There’s a Boat Dat’s Leavin’ Soon for New York”. Faulkner lightened his touch, and Calderazzo proved to be a superb vocal accompanist. Granted, Elling needs very little support, but Calderazzo supplied just what was required: the two bounced melodic ideas across the stage before the pianist reverted to precisely-voiced chords. Marsalis contributed a brilliant solo on soprano sax before Elling launched into a newly improvised version of the song’s closing speech: confronted with the obvious problems of taking a boat from Denver to New York, he suggested finding a car for a road trip, then decided that hoverboards would be much more efficient! As on the CD, the band followed this tune with the ballad “Blue Gardenia” and Marsalis—now on tenor—played with a warm tone reminiscent of John Coltrane’s sound on his “Ballads” album. Moving to Tom Jobim’s “Só Tinha de Ser Com Você”, Elling started in his lowest register, giving the Portuguese lyric a sinister flavor. By the time he traded improvised passages with Marsalis, Elling was singing in his middle range, but retained many of the Portuguese sounds for his scat syllables.

A mix of poetry and jazz, “Momma Said”, segued into an exciting version of the 5/4 blues “Long as You’re Living”. The solos on the latter were capped by Faulkner’s tremendous drum solo, which drew sustained cheers from the audience. As that tune ended, Marsalis took the stage for an extended unaccompanied tenor solo. This lead into one of the evening’s highlights, Sting’s “Practical Arrangement”. This sparse setting was also the highlight of the Marsalis/Elling CD, and if anything, it was even more powerful when performed live. Elling’s performance in Denver seemed more intimate and vulnerable than on the CD, and the urgency in Marsalis’ tenor sound made him sound like another voice in conversation. The, rubato arrangement enhanced the song, and while I doubt that it made anyone forget the original duet recording with Sting and Jo Lawry, the Elling/Marsalis version brought new emotional dimensions to this wonderful song.

Elling and Marsalis could have closed the concert with “Practical Arrangement”, but they had a few more surprises in store. A sunny gospel-rock version of Calderazzo’s “”The Return” (“Upward Spiral”) marked the end of the formal concert, but with little prodding, Elling and Marsalis returned to the stage for a heartbreaking duet on “I’m a Fool to Want You”. The audience might have thought that the duet would be the only encore, but Rivas appeared onstage right as the duet ended, He took up his bass for an outstanding and highly dramatic unaccompanied bass solo. The audience had no idea what was to happen next, and after a few minutes of the bass solo, the rest of the band reappeared onstage and launched into a stirring version of the old New Orleans standard “St. James’ Infirmary”. Marsalis put everything into his emotionally charged solo. Meanwhile, Elling grabbed a paper coffee cup and used it like a plunger mute as he growled through a trombone-like scat solo. Marsalis got the final word with a teasing unaccompanied coda, before the group finished the arrangement with a quote from Chopin’s “Funeral March”.

The Marsalis/Elling group was an inspired ensemble, and the pairing of vocalist and saxophonist brought out the best qualities in the leaders and the band. Elling has his own superb touring quartet, but I hope that he participates in more artistic collaborations like this one. Elling is not only one of the best male vocalists working today, but also an outstanding improviser (regardless of instrument). Having another top-flight soloist to work with allows Elling to explore and develop his unique gifts. Marsalis also benefits from such collaborations, as it showcases his playing, which is in peak form, while he leads one of the best rhythm trios in the country. At times, Branford’s supreme musicianship has been overshadowed by his younger brother’s celebrity. The collaboration with Elling has helped to rectify that situation.