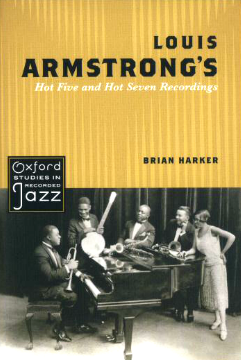 One of the enduring mysteries of jazz history is how Louis Armstrong developed into a virtuoso soloist who influenced nearly aspect of jazz performance. Born into one of the poorest of all American ghettos, Armstrong only had a fifth-grade education, and limited access to music created outside of New Orleans. When he became passionate about music and decided to make a career of playing the cornet, he absorbed new music like a sponge, but his musical education came in spits and starts. In the new Oxford monograph, “Louis Armstrong’s Hot Five and Hot Seven Recordings”, Brian Harker attempts to piece together the various influences that formed the young Armstrong’s approach. The title of the book is a little misleading–Harker doesn’t discuss all of the Hot Fives and Hot Sevens in detail; rather, he focuses on seven tracks, each showcasing a specific attribute: “Cornet Chop Suey” (novelty); “Big Butter and Egg Man” (telling a story); “Potato Head Blues” (playing the changes); “S.O.L. Blues” and “Gully Low Blues” (top notes); “Savoy Blues” (sweet music) and “West End Blues” (versatility). Harker argues that Armstrong thought of these recording sessions as gigs, and not as a way to revolutionize jazz. At least, that’s the argument at the beginning of the book.

Harker includes a considerable amount of biographical data that gives new perspective to Armstrong’s influences. He makes a valid connection between jazz and dance, noting the contributions of a dance act called Brown and McGraw which Armstrong accompanied at his evening job at Chicago’s Sunset Café, and spotting the rhythmic similarities between Armstrong’s solos and tap dance routines by Bill “Bojangles” Robinson and the Nicholas Brothers. He also discusses the relationship between Armstrong and the chief music critic for “The Chicago Defender”, Dave Peyton. Peyton was probably one of the first African-American music critics and while his opinions seemed to change with the wind, his quotes give important reference points for Chicago’s musical atmosphere in the twenties.

The majority of Harker’s study is devoted to musical analysis, and readers without significant musical background are likely to get lost in the details. The musical examples serve Harker well, especially in the opening chapters as he points out rhythmic patterns borrowed from King Oliver, and melodic ideas adapted from method books by Louis Panico and J.B. Arban. He compares Armstrong’s improvisation on “Cornet Chop Suey” to clarinet solos by Lorenzo Tio, Johnny Dodds and Sidney Bechet. Later, a double score shows how Armstrong paraphrased the melody for his “Big Butter and Egg Man” solo, and then displays his harmonic acuity on “Potato Head Blues”. And throughout the work, Harker uses transcriptions to show how Armstrong’s mastery grew with each successive performance (with an especially good interpretation of Armstrong’s approach and performance of high—or “top”—notes).

Harker runs into trouble when he tries to tie Armstrong’s personal life and his music. Most of his arguments are highly circumstantial, and the reader is expected to believe everything wholesale.  For example, he links the lyrics on “S.O.L.” and “Gully Low” to marital problems between Louis and Lil Hardin Armstrong. We know that the couple had issues with class issues (In contrast to Louis’ hard-scrabble upbringing, Lil came from a comfortable middle-class family, and she had a music degree from Fisk University). However, that does not mean that Louis sang a derogatory lyric directed at his spouse on a recording on which both of them played. Further, “S.O.L.” was rejected at the time (presumably because of the title, although Louis does not sing the expletive), and the lyrics refer to a wife richer than the husband. Unless there’s evidence that Lil’s family was offering financial help to the young couple—and Armstrong’s salary at the time seems to rebuke that—the pronouns would have been reversed if Harker’s assertions were to hold true. One could make a better case for the lyrics of the remake “Gully Low”, which has Louis promising to refine his manners, but in dealing with both recordings, Harker’s theory falls apart. In the next chapter, Harker goes to great lengths to prove that Armstrong’s “Savoy Blues” is some sort of homage to the music of Guy Lombardo. Again, there is evidence that Armstrong first became aware of Lombardo around the time of the recording, but Harker’s assertions that Armstrong’s style here was somehow “sweeter” and that Kid Ory’s composition was somehow inspired by Lombardo’s arrangement of “Coquette” are proved incorrect by listening to Armstrong’s recording, which bears no similarities to Lombardo whatsoever.

When we arrive at the final chapter, Harker’s intentions become clear. He has structured his historical monograph like a novel, with a denouement bigger than an Independence Day fireworks show. All of the Dave Peyton stories come together in a story of how Peyton changed his allegiances from Armstrong to a rival trumpeter Reuben Reeves. Peyton had financial interest in a new theater that offered live performances in between talking pictures, and he offered the trumpet spot to Reeves. When the two trumpeters were brought together at the theater, Peyton tried to sabotage Armstrong by having Reeves play his show-stopping number while Armstrong was still in his dressing room. Armstrong found out soon enough and, according to a second-hand account, Armstrong responded by playing “one or two hundred choruses of ‘Chinatown’ (or ‘Tiger Rag’)”. All that’s missing is the hero’s victory parade.  Then, as Harker sees it, Armstrong decides to prove his superiority by throwing all of his devices together onto one record—“West End Blues”. It’s a great ending for the book, but was it Armstrong’s intention? Harker conveniently notes that “West End” “nicely recapitulates many of the developments treated in this book”, and if we are to believe his analysis, Armstrong was changing styles from sweet to gutbucket to classical about every other bar! This makes absolutely no sense. Armstrong’s approach to this point had been to deal with each development on separate recordings, which is perfectly logical when making a series of singles (suppose no one buys your supremely-planned masterpiece, and buys the pop novelty instead?)  Harker’s power of suggestion is such that we can hear the individual elements he claims, but the overall unity of Armstrong’s elegant recording belies the inflated analysis.

With Armstrong and his contemporaries gone, it’s difficult to assess the roots of Armstrong’s genius. Some (or even most) of Harker’s assertions may well be true. But his presentation of this material may work against him. History (and especially jazz history) rarely travels in straight lines, and while some of Armstrong’s collaborators and experiences may have had immediate effects on his music, we cannot be sure of those connections if they are presented in such a hackneyed fashion. Next time, Mr. Harker might be advised to stick to the music and leave the historical suppositions to others.