The Cambridge Companion to Duke Ellington (Edited by Edward Green) 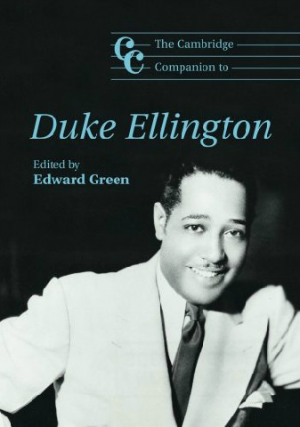 When compiling a group of newly commissioned essays from a wide range of authors, the results cannot help but be uneven. And when the subject of these essays is an enigmatic personality who often clouded descriptions of his own work, the problems multiply. So it shouldn’t be too surprising that “The Cambridge Companion to Duke Ellington” is in turn frustrating, enlightening, boring and fascinating. Editor Edward Green collected the works of 20 authors for this volume, most of whom are music historians. Each author takes a different approach and/or a specific segment of Ellington’s life as the basis of their 10-to-20 page article, so that we see Duke’s life and music through many prisms. There is a great deal of musical analysis within the volume, and several of Ellington’s major works are discussed more than once. The writing styles vary from personal narrative to technical jargon, and sometimes dramatic changes in tone occur within the same article. While I imagine that some readers will skip ahead if they are frustrated or confused by one author’s discussions, it is worth the struggle to trudge ahead with each chapter in this book.

I suspect that many readers will have difficulty with Green’s opening essay. In it, he tries to connect Ellington’s work with the philosophy of Aesthetic Realism. This theory, developed in the 1940s by Green’s teacher Eli Siegel, has (in Green’s view) “widely affected scholars and critics these past decades, though far too often without acknowledgement”. Yet Green’s descriptions of the theory seem vague to me: Art shows reality as it truly is—the oneness of opposites. The greater the work of art, the more that is so. The size of a musical artist is in proportion to how much of the world is in his or her work: the depth of the world; its variety; its width; its integrity over time. I’m sure that writing about philosophy is as difficult as writing about instrumental music, but I doubt that anything—especially art—has a single (or “oneness”) opposite. Also, the use of words like “greater”, “size” and “depth” seem to be abstract concepts within this context instead of the fairly concrete ideas they usually convey. Perhaps I (and other readers) should go to an external source to learn more about the concept, but since Green brought this subject into his essay, it is his responsibility to thoroughly explain the philosophy to his readers. He has failed in that respect. Further, I cringe at the idea of retro-fitting a philosophy to music that was created before the philosophy was conceived, especially when we have no evidence that the musician (in this case, Ellington) knew or subscribed to the idea.

Thankfully, things improve with the next article. John Howland’s essay on Ellington’s formative years is a well-researched study of Ellington’s musical training. The article also goes into detail about the atmosphere which developed around Ellington as he broke into the New York music scene. David Berger digs into the music in “The Process of Becoming: Composition and Recomposition”, but instead of discussing the evolution of Ellington’s works throughout the years (as both the title and opening paragraphs imply), Berger writes about how the various ways Ellington collaborated with his musicians, whether describing Buddy Bolden’s character to Clark Terry for an impression in “A Drum is a Woman”, using a Cootie Williams warm-up figure as the basis for “Concerto for Cootie”, or adapting chord voicings to accommodate Ben Webster’s tenor and Jimmie Blanton’s bass. The research and analysis is superb, but astute readers might want to re-read the chapter to find where the change of direction occurred.

Stephen James was the only son of Ellington’s sister Ruth, and he traveled with Duke’s band for several years. His recollections (co-written with J. Walker James) are some of the most valuable parts of the book. Ellington was a champion at managing the diverse personalities of his musicians, and in addition to hearing the famous story about Charles Mingus’ short tenure with the band, we also learn about a brief period when Elvin Jones was the band’s drummer. James also tells of Ellington’s speeches on the band bus, designed to inspire the musicians to work harder and present better concerts. James relies on the old myth about the virtually identical writing styles of Ellington and Billy Strayhorn (which Strayhorn scholar Walter van de Leur effectively refutes in his essay), and attempts to repair Ellington’s image in his relationship with Strayhorn. The essay by composer Olly Wilson and Wilson’s protégé, Trevor Weston, follows in the same general pattern, albeit in a more academic tone. Wilson and Weston examine Ellington as a cultural icon, specifically his role as a black composer. After a long-winded history of distinguished black musicians, Wilson and Weston discuss how Ellington set himself apart from racial stereotypes through the content of his music. There is a most welcome analysis of Ellington’s music for the 1935 short “Symphony in Black”, which is then compared to the starkly different black-centered feature film of the following year, “The Green Pastures”.

Brian Preistley, Jeffrey Magee, Andrew Berish, Anna Harwell Celenza, Anthony Brown and Dan Morgenstern all had similar roles within this book. While Priestley covered Ellington’s overseas performances throughout his career, each of the other authors took on the works of a specific decade (or in Morgenstern’s case, the last 14 years of Ellington’s life). Each of these subjects could easily fill a full volume on their own, and both Priestley and Morgenstern draw from their own personal encounters with Ellington in addition to discussing recordings of the time. Brown displays an exceptional knowledge of Ellington’s band recordings from the 1950s. Magee, Berish and Celenza are more specific in their essays (which discuss the 20s, 30s and 40s respectively), focusing on important single recordings and their relationship to Ellington’s life and environment at those times.

In the book’s final section, Benjamin Givan, Bill Dobbins, Marcello Piras, Will Friedwald, and David Berger explore the different aspects of Ellington’s art. Givan offers a fine cross-career discussion of Ellington’s relationship to the blues, not only writing of pure blues pieces, but also compositions where the blues are inserted into other forms. Dobbins considers Ellington’s contribution to jazz piano, and while his examples are well-chosen, it seems strange that he does not explore any of the small-group recordings where his piano was featured, like “Money Jungle”, “The Cosmic Scene”, “Piano in the Foreground” or the collaborations with Louis Armstrong, Coleman Hawkins and John Coltrane. Before shifting to a catalogue-styled list of specific attributes, Piras’ essay on Ellington’s descriptive music includes a remarkable comparison of “Black and Tan Fantasy” to a famous Biblical story. Berger’s spot-on analysis of Ellington’s major suites is expertly combined with sensitive commentary regarding the reaction of critics to these works. Those familiar with Friedwald’s previous works should be pleasantly surprised by the amount and quality of the musical analysis in his article about Ellington’s popular songs.

The book concludes with Benjamin Bierman’s weakly-conceived piece comparing Ellington with Gerald Wilson, Clark Terry, Cecil Taylor and Quincy Jones. Of all jazz musicians, Ellington was truly in a class by himself, and to compare him with other musicians—all contemporaries and masters in their own right—seems to me a disservice to everyone. While Ellington’s music didn’t exist in a vacuum, it always seemed to follow Ellington’s own direction more than the general evolution of jazz. Even when he embraced styles from other genres of music, he found his own way to interpret them in his own manner (for example, “Blue Pepper” from the “Far East Suite” which mixes a rock beat and middle-eastern influenced melody). In a way, that’s what the Cambridge Companion does as it looks at Ellington through different vantage points. It’s not an optimal collection, but it is a worthy addition to the historical canon of Ellingtonia.