Keystone Korner: Portrait of a Jazz Club (by Kathy Sloane) 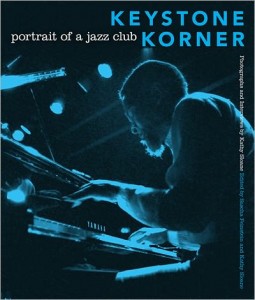 I remember driving home one New Year’s Eve in the early 80s after having played a typical New Year’s party.  Starved for some good music, I came upon a live radio broadcast from the fabled Keystone Korner jazz club in San Francisco.  Freddie Hubbard was playing and he was in top form. He was playing one of his signature tunes, “Sky Dive”, and I wished I could’ve been there to hear those sounds live! The club closed in 1983 after 11 years in business, but Kathy Sloane’s wonderful new book “Keystone Korner: Portrait of a Jazz Club” (Indiana University Press) may be the next best thing to visiting the club when it was in full swing. Photos, interviews, anecdotes, descriptions of the club and the culture of the time, and an accompanying CD with live tracks from the club are all integral elements of the book.

The black and white photos of Kathy Sloane rate with the classic jazz photos of William Gottlieb, and Herman Leonard. They document the artistry of the many fine musicians who appeared at the club. They portray the musicians playing, in thought, or just relaxing. There’s a classic shot of Dexter Gordon doing his signature bow at the end of a tune, where he holds his tenor perpendicular to his tall, lanky frame. Another picture captures bassist Percy Heath in a moment of pure joy, with a broad smile on his face. These pictures provide a fascinating look at a vital venue now part of jazz history.

Thoughts and personal reflections about the club from owner Todd Barkan as well as the waitresses, customers, and musicians, which makes the club come alive in your mind. Everything from the finances, the general management of the club (evidently the club was always in a state of financial chaos), the food and drink served, the tight quarters, and the brilliant music, are discussed. There are humorous as well as sad anecdotes, and several interesting stories about the club’s relationship to the police station next door. There’s even a chapter in the book where the club’s chef describes the importance of the food to the ambience and to the musicians. You can almost smell the soul food cooking!

The accompanying CD is a very small sampling of music from the club. They are all tracks that have been previously released and are available under the individual artist’s names. Tracks from Gordon, Rahsaan Roland Kirk, Stan Getz, Bill Evans and McCoy Tyner give the reader a taste of what it was like at the club, but it is far from a comprehensive representation (I would have loved to have heard tracks by Mary Lou Williams, Art Pepper, Freddie Hubbard, Zoot Sims and Charles Mingus). The tunes on the CD sampler are nearly all over seven minutes in length, and a gorgeous version of “My Foolish Heart” by the Cedar Walton Quartet with Bobby Hutcherson is nearly twelve minutes long. Another highlight is Woody Shaw’s “Ginseng People” which is clear, sparkling, and crackling, with energetic and fiery playing.

There were many legendary jazz rooms that are now closed, but we are fortunate to have music, pictures and stories from hallowed venues like Minton’s Playhouse, the Three Deuces, the Cotton Club, and the Savoy Ballroom.  I’ve never quite seen or read anything quite like Sloane’s book, though. It is a fascinating history of a legendary jazz club.