The Girls in the Band (Artist Tribe/One Step) 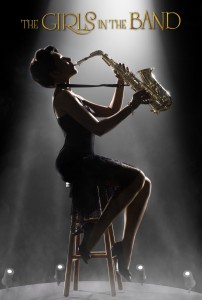 With jazz firmly ensconced in its second century, it has become harder and harder to present the entire history of the music in a concise format. Books about jazz history now run upwards of 500 pages, and recorded collections take up several compact discs. For filmmakers, the challenge is even greater because the expenses of creating films and the demands of exhibitors usually decrees running times of 60-90 minutes. Even when a filmmaker focuses on a small portion of jazz history, it can be difficult to include all the important details in a limited time frame. For example, Burrill Crohn’s 1981 series for A&E, “Women in Jazz”, ran 3½ hours in 7 segments. Years ago, I outlined an overview of the same topic spreading over four hour-long shows. However, director Judy Chaikin has accomplished the seemingly impossible with her comprehensive documentary “The Girls in the Band”, which neatly covers women instrumentalists of the past and present in a mere 88 minutes.

The film opens with Dr. Billy Taylor discussing the famous Art Kane “Great Day In Harlem” photo and noting the paucity of women in the picture. Taylor’s claim that most of the women are forgotten strains credibility—after all, there have been many documentaries and written histories of women musicians created in the past two decades—but the stories of these musicians are not well-known. As Chaikin introduces us to musicians like Billie Rogers, Roz Cron, Peggy Gilbert, Carline Ray, Willie May Wong and Clora Bryant, we learn more about these players than we’ve heard from earlier sources. Many of these musicians were members of the multi-racial International Sweethearts of Rhythm, and they tell detailed stories about the struggles of touring in the South. Cron, one of the few white members of the Sweethearts, tells of efforts to darken her skin with makeup, and about a black woman who risked her personal safety by allowing Cron to stay at her home. In one of the film’s great quotes, Cron says that she was “ashamed of her own race” when traveling in the South. Concurrent with the recollections of the Sweethearts, Rogers tells of her experience as the only female instrumentalist in the Woody Herman Orchestra. She dealt with the other main problem faced by women musicians: acceptance by her male colleagues, who either dismissed the talents of female players outright, or tried to keep them out in order to retain the “boys club” atmosphere of the band.

The framing device that serves the first half of the film so well causes a few problems in the midsection of the film. The living musicians from the Sweethearts and other big bands bring us into the story in media res, so the work of pioneering women musicians like Lil Hardin Armstrong shows up after World War II (about 20 years too late), and others like Lovie Austin aren’t mentioned at all. The narrative thread gets tangled in the bop, cool and soul eras, as Chaikin tries to weave the continuing story of Mary Lou Williams with the histories of then-emerging players like Marian McPartland and Vi Redd. However, things get back on track with a discussion of the 1970s Women’s Jazz Festival, and Chaikin does an admirable job of surveying the vast range of contemporary women musicians, including brief segments on players as diverse as Patrice Rushen, Terri Lyne Carrington, Jane Ira Bloom, Hiromi, Anat Cohen, Maria Schneider and Esperanza Spalding. The film ends with a delightful segment on a new “Great Day in Harlem” picture with 60 women musicians standing on the same staircase 50 years to the day after Art Kane shot the original photo.

For the past few years, “The Girls in the Band” was only shown at public screenings. At long last, the documentary has made its way to home video. The film is presented in a widescreen format with a Dolby Digital soundtrack. A commentary track with Chaikin and producer Michael Greene (best known as the former president of NARAS) includes several factoids about the making of the film, as well as an important discussion on the need for music in our public schools. Special features includes short pieces on the all-woman big band, Diva, Mary Lou Williams, transgender bassist Jennifer Leitham, and the female version of the “Great Day in Harlem” photo which closes the documentary. All are very informative, but they would have been better if the interviewees had been identified on screen. Leaving the chyron names off of the master was probably an oversight, but it needs to be corrected.

This film is a must-see. It offers a comprehensive look at an important subject, and is, in turn, heart-rending, informative and quite funny (there is exactly one obscene word in the entire film—you’ll be surprised who says it!). Pick up a copy of “The Girls in the Band”; you won’t be disappointed.