Freedom of Expression: Interviews with Women in Jazz (by Chris Becker) 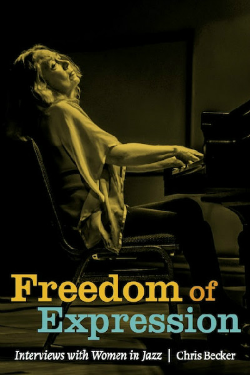 In August 2012, Jazz History Online ran a full issue dedicated to women in jazz. As editor, I wondered if the subject was still relevant. After all, the number of female jazz musicians had increased substantially since the 1970s when the first Women in Jazz festivals took place. I decided to run the issue because of the website’s ongoing support and recognition of females in both vocal and instrumental jazz. Nearly four years later, the integration of women into the jazz scene continues to improve, yet on the day I’m writing this article—International Women’s Day—I’ve seen several posts about radio hosts dedicating their shows to female jazz musicians and I’ve read about an all-star sextet of women jazz musicians who are currently touring Europe.  Chris Becker’s book of interviews with women jazz musicians, “Freedom of Expression” (Beckeresque Press), concurs that women now represent a significant portion of professional jazz musicians, and Becker lets his subjects discuss the present challenges of being a working musician in an ever-changing music business rather than discussing the struggles of the past.

Becker’s 37 interviewees feature a few famous artists—and plenty of obscure ones. Becker acknowledges that some of the musicians refused to take part due to weariness with the whole “women in jazz” concept. While it is surprising to note the prominent musicians not present in the volume—Maria Schneider, Ingrid Jensen, Renee Rosnes, Jane Bunnett, Melissa Aldana, Sheila Jordan, Virginia Mayhew, Toshiko Akiyoshi, Cassandra Wilson, Roseanna Vitro and many more—their omission allows Becker to include lesser-known players like Ellen Seeling, Malika Zarra, Samantha Boshnack, Jan Leder and Helen Sung. Readers who don’t know the work of these musicians will learn a great deal about their music as Becker lets them tell their stories with a minimum of interference. Nearly every interview includes references to recent CDs and discussions of how these women have used their wide variety of influences to create unique music of their own. Several of the artists have difficulty calling their music “jazz” but all of them understand how the improvisational elements of their work makes them fall under the jazz umbrella. Many of the women comment on the current state of the recording industry, and talk about how they market and finance their music through avenues of crowd-funding, licensing and self-released albums. The only real weaknesses in the interviews come from Becker: he tends to use the same basic set of questions for every artist, and his introductions to the interviews include artist quotes that are repeated word-for-word within a few pages.

If we take the musicians’ word for it, it would seem that contemporary women jazz musicians have a fairly easy time of having their music heard and accepted by fellow musicians and audiences. The optimist in me is encouraged by this assertion, but the pessimist in me is skeptical. However, we can be sure than the situation for women jazz musicians is much better now than in years past. Becker’s lengthy introduction makes a feeble attempt of summarizing the history of women in jazz. He tells of Down Beat’s infamous 1938 article “Why Women Musicians are Inferior” and saxophonist Peggy Gilbert’s powerful rebuttal printed a few weeks later. But many women  experienced extreme sexually harassment on the bandstand—drummer Sherrie Maricle was once told that she could sit in at a jam session if she took her shirt off—and these stories are essential to a full understanding of the history of women in jazz.  Omitting these anecdotes is analogous to writing a history of the Civil Rights Movement without mentions of  Emmett Till, Rosa Parks and Medgar Evers.

In many cases, the stories Becker’s book would hardly be different if the subjects happened to be male. That brings up a crucial point: is there indeed a feminine aspect to the music, or is there no discernible difference between male and female jazz musicians? One would assume that the former is the case—many of the female jazz musicians I’ve interviewed have said so—but Becker’s interviews seem to infer the latter. But if there is no gender difference in jazz, why focus on women musicians at all? While reading this book, I could not help but think that the book had evolved from its original premise, and that Becker seemed unwilling to change the book’s structure. As it stands, the book is much more relevant about the current state of the music business than the seemingly outdated concept of women in jazz. Becker needed to seize upon this opportunity: he could have expanded his scope to include a representative number of male jazz musicians—probably retaining his focus on lesser-known players—and given us a valuable and detailed look at the state of jazz in 2016. “Freedom of Expression” does accomplish some of that goal, but it would have been a better book if Becker would have simply followed his muse.