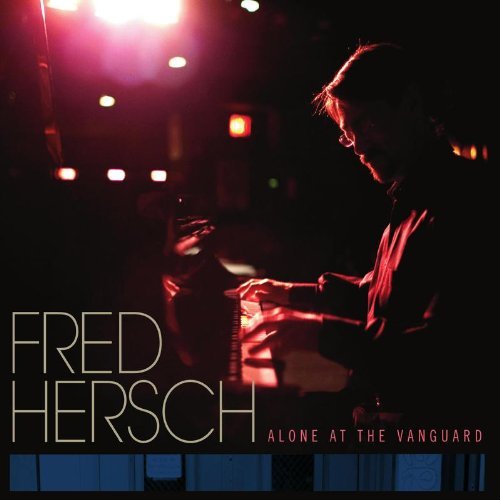 Call it the re-emergence of Fred Hersch. The pianist, who has been HIV-positive for several years, went into an AIDS-related coma in 2009, and many of us in the jazz community feared that he would not survive it. Thankfully, those fears were dashed, and in the year or so since he emerged from the coma, he has become more active than ever, touring, recording and playing more magnificently than ever. He created a multi-media presentation based on his dreams from the coma, and for the second time, he played a week-long solo engagement at the Village Vanguard.

Hersch had every set recorded, but decided to release the final set of the last night for his album “Alone at the Vanguard”. In the liner notes, Hersch states that he was “in the zone” for this set, and his playing is incredibly focused, even for him. There is a rushing sense of intensity in his rhapsodic versions of “In The Wee Small Hours of the Morning” and “Echoes”, while “Down Home” (dedicated to Bill Frisell) has some amiable funkiness thrown into the mix. On the Konitz dedication “Lee’s Dream”, Hersch sounds like two pianists as he plays his original stop-start melody and improvises intricate cross-rhythms between the single-note bass line in his left hand and the chorded inventions in his right.

“Pastorale” is dedicated to, and was no doubt inspired by, Robert Schumann. It has the rippling piano chords that marked the Romantic composer’s work, but I also hear the music moving in and out of a dark vortex that may refer to Schumann’s mental instability. While the convoluted chord progressions continue, it seems that calmness and light are just slightly out of reach. Eventually, the calm mood takes over near the end of the piece. The title of Jacob de Bandolim’s “Dodo de Coco” translates as “sweetie”, and Hersch’s rendition is light-hearted and joyous, save for an intense episode in contrary motion.

Hersch’s final three pieces are all standards from the jazz repertoire. His version of Eubie Blake’s “Memories of You” may be the most touching rendition of this chestnut ever recorded. As on the glorious version of “The Nearness of You” from his Jordan Hall concert, Hersch creates an instrumental rendition that captures the meanings of both the music and the lyrics. His delicate touch and slow walking tempo seem to evoke a musical portrait of a dear friend. Thelonious Monk’s “Work” is one of his most difficult lines, and Hersch maintains those intricacies throughout his improvisation. Hersch’s encore starts with an improvisation, and it’s not clear if he was letting his inventions lead to a song, or if he was planning to play Sonny Rollins’ “Doxy” all along. Nonetheless, it is fascinating to hear Hersch create this piece. Upon second listening, we can hear little ideas that seem to point to “Doxy”, but it is not until about three minutes into the track that we can discern the harmony of Rollins’ piece. Like a crafty gambler, Hersch holds his cards to the end when he reveals his sinuous adaption of the Rollins melody. I’m sure that the listeners at the Vanguard were on the edge of their seats trying to figure which direction Hersch would take.

Because of his fragile health and his continued musical brilliance, every Fred Hersch recording must be considered a blessing. With “Alone at the Vanguard”, he has produced another masterpiece that proves that the human spirit can overcome any physical ailments. May he create many more works in his lifetime, for he truly touches everyone who hears him.