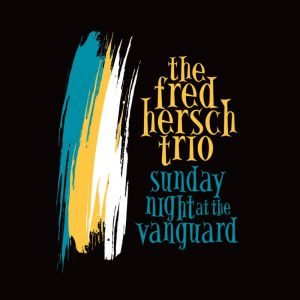 Most live recordings—regardless of genre—compile the best music from several performances. No matter how skilled the musicians, there are usually tracks with flaws ranging from minor note fluffs to under-inspired interpretations. However, every so often, all of the right elements join together and an ensemble plays an outstanding set that could not be improved. That is the case with Fred Hersch’s new trio CD, “Sunday at the Vanguard”, a set which almost went unrecorded. Hersch was unsure about recording another CD at the Village Vanguard—this is his fourth album recorded there, and the second with bassist John Hébert and drummer Eric McPherson—but Hersch changed his mind during the group’s initial sound check. The music on the new disc represents one amazing nightclub set, with two tracks from the following set added as a bonus.

It is an album best heard through headphones, so to hear all of the interplay between these three superb musicians. Since Bill Evans recorded his famous Sunday performance at the Vanguard, rhythm sections have searched for ways to avoid playing explicit beat patterns. I suspect that Evans would be delighted at the remarkable way in which Hersch, Hébert and McPherson create an easily discernible pulse on “A Cockeyed Optimist” with each musician playing fragmented lines rather than straight time. Yet on the very next track, Hersch’s aptly-named “Serpentine”, the trio instinctively creates a pulse that ritards and accelerates seemingly at will—a concept that a solo artist can do easily, but one that is very difficult to achieve with a trio. Even when the tempo picks up in the midst of a track, as on Hersch’s boppish “The Optimum Thing”, it sounds like the effect is completely intentional.

This trio has been together for seven years, and just like any other long-standing musical group, they understand each other on a nearly psychic level. The amount of interplay is so dense that the concept of individual solos seems almost antiquated. Even when Hersch is clearly taking the solo lead, Hébert and McPherson create such an interesting background, one simply must pay attention to them as well. The trio’s version of Jimmy Rowles’ “The Peacocks” offers a stunning example. The track opens with a 3-minute solo piano improvisation which draws upon the French Impressionist composers before moving into the well-known theme. As a solo piano piece, it stands with Hersch’s best work. However, when the rest of the trio enters, the character of the work changes in very subtle ways. Hébert enters with a single note which fits perfectly with what Hersch is playing. That one note—played just before McPherson strikes his cymbal for the first time—signals a change. Hébert leads into an improvised countermelody that grabs our attention with its very starkness. And as Hersch and Hébert continue their dialogue, McPherson creates a fascinating array of sounds between the brushes on his snare and his light cymbal strokes. A listener could play this track three times in order to focus on each musician, but all of this happened simultaneously, and just like the audience in the Village Vanguard that Sunday evening, we are challenged to hear as much as possible in a single hearing.

In reviewing jazz albums, there is a constant temptation to single out solos and favorite moments. This album is filled with such delights: Hersch’s aforementioned prelude to “The Peacocks”, Hébert’s sensitive countermelody on “For No One”, and McPherson’s exciting and resourceful percussion on “Blackwing Palomino”, to name only three. But this album is truly a group effort, and to focus on a single musician’s contributions in this setting could easily diminish the contributions of the trio as a whole. Like the Modern Jazz Quartet, the Fred Hersch Trio is an entity where the individual parts coalesce into a greater whole. “Sunday Night at the Vanguard” is an instant classic, and the best piano trio album I’ve heard in years.