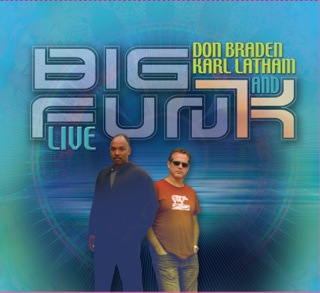 Don Braden and Karl Latham’s new album, “Big Fun(k) Live” explores new territories in jazz and funk with hard-hitting grooves, clever riffs and sophisticated harmonies. The project was recorded over three nights at Cecil’s Jazz Club in West Orange, New Jersey. Saxophonist Braden cut his teeth early on playing instrumental funk and jazz of the 1970s and then became one of the “young lions” of the 1980’s touring with Betty Carter, Wynton Marsalis, Tony Williams, Freddie Hubbard and Roy Haynes. Drummer Latham broke out on the New York jazz scene in the late 1980s, and since 1993 has gravitated to the European jazz scene sharing the stage with Joe Lovano, John Lee, and Boris Kozlov. Keyboardist Nick Rolfe shines on every track with synthesizer grooves, neo-soul and world beat chops. But it is bassist Gary Foote’s pure funk solos and perfectly pocketed grooves with Latham that fuels the excitement of the band. The master bassist is best known for his 20-year plus association with Blood, Sweat and Tears as well as with Billy Cobham. “The main difference with our music now is that we probably use more non-diatonic harmony than our predecessors,” said Braden. “That’s not an innovation per se; we’re just using material from our experience with today’s modern jazz, so naturally it will sound different than the 1970s. I’m not as concerned about moving the style forward as I am interested in the potential for creating expressive music and magical moments in real time.”

The first track, “High Rise” sets the mood and groove one would expect from this high caliber group. Foote’s solo eight bar intro reminds us of all the things we love about funk like strong riffs and lines with “popped” high notes and thumb-slapped bass.The drums and Fender Rhodes piano join in the next eight bars, leading to the sultry melodic line carried by the saxophone. There is a seamless mix of funk and jazz textures that work exquisitely together. According to Braden, the unison ensemble section was inspired by Stevie Wonder’s “Sir Duke”. The band reaches into the pop world as they re-create the Beyoncé tune, “Déjà vu”. Braden adds his own flair by changing the key from the original recording and including jazz harmonies in the melody sections, which contrast with the solo sections (there is a vamp in E-flat minor that modulates to e minor on a smoking bass solo and back to E-flat minor on the return to the vamp). On “Having A Ball,” the only song on this set that features just the saxophone, Braden’s technical prowess assists in telling his soulful story. Braden’s sax solos are always on target throughout this project because he understands the importance of conveying the message of each phrase. “Having a Ball” is actually the intro to a gospel tinged funk interpretation of “Lucy in the Sky with Diamonds.” Braden remarks “I was looking to combine the two songs and I thought of Lucille Ball which made the perfect connection.”

One of my favorite tracks is “A Foote in the Door” because it is reminiscent of the great jazz-fusion from early groups such as Weather Report.  This piece clearly demonstrates the interrelation between complex harmonic melodies and solid syncopations. The solo section has minor chords moving down in minor thirds (G minor, E minor, C# minor), which makes for an interesting sound yet a definite improvisational challenge. However, with this group of exemplary musicians, each one brings a visceral level of spontaneity that demonstrates their effortless musicality and skill. Although “The Funky View” is one of the most harmonically and melodically simple tunes on the disc, it is still hard-grooving and danceable. Originally conceived as a “smooth jazz” piece, “Heads Up” contains a fairly intricate melodic and harmonic feel, losing itself in a trance-like improvised section. “Confusion,” contains a minor-tinged main melody with a solo section similar to the Jaco Pastorius tune, “The Chicken,” and a challenging time signature of 13/8. “Song for Mother” is a dedication to Braden’s mother and one of the most beautiful songs on the recording. It begins in a slow tempo with the alto flute playing the melody accompanied by ostinato bass. The alto flute creates an ethereal quality supported by Rolfe’s complimentary string sounds and synth solo. The ability to switch from the hard-hitting grooves of the previous tracks to the sublime treatment of this sensitive song is another reason to appreciate the talents of these fine musicians. The rousing finale to this set is a tune called “Grover Miles,” in tribute to the bands all-time favorite musicians, Grover Washington, Jr. and Miles Davis. The bass line is related to the Davis composition “Tutu” and the melody has elements of classic Washington tunes from recordings of the late 1970s and early 1980s.

The more I listen to this infectious recording, the more I love it. It’s questionable that anyone could sit still listening to the killer grooves on this project, which is why this is a funk lover’s dream! This tasty recording belongs in any serious funk, jazz-fusion, and soul collection.