Dameronia: The Life and Music of Tadd Dameron (by Paul Combs) 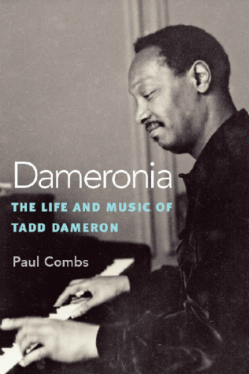 By any measurement, Tadd Dameron is a difficult subject for a current-day biographer. Although he was beloved by musicians and jazz fans, he was not well-known by the general public. He did not receive a great deal of press during his lifetime, and the interviews he granted were usually filled with exaggerations and outright lies. Dameron’s discography is rather small, and his career was sidetracked at significant junctures due to a heroin habit. Ironically, it was cancer and not drugs that killed Dameron in 1965, but with nearly half a century between his passing and the publication of his first authoritative biography, many of Dameron’s family and colleagues are dead as well, or never knew the details of Dameron’s personal life. Thus, Paul Combs should be commended for taking on Dameron’s life and music with his new book “Dameronia” (University of Michigan). While many details in Dameron’s life story may never be known, Combs does what he can with the paucity of surviving information.

Combs focuses on Dameron’s arrangements and recordings, making a strong case for Dameron as a primary architect of bebop harmony. He cites Dameron’s friends from his hometown of Cleveland who claim that Dameron was using chromatic harmony as early as 1935. More importantly, Combs shows Dameron using that advanced language in his earliest arrangements for the territory band of Harlan Leonard and for Jimmie Lunceford’s orchestra. Dameron played  “arranger’s piano”, which meant that he was not a strong soloist, but was very good at accompanying other players. Combs quotes drummer Stan Levey who claims that at a 1945 Dizzy Gillespie rehearsal, Gillespie asked Dameron to teach Al Haig how to comp in the bebop style. While Gillespie could have done the job himself, it was a sign of his respect for Dameron that he asked him to tutor Haig. Combs also follows Dameron’s work as a vocal coach and arranger and points out the unique chord sequences he used in charts for Sarah Vaughan, Billy Eckstine and Carmen McRae. He also notes the formal complexity of Dameron’s extended  through-composed pieces, “Fontainebleau” and “Soulphony”.

However, in his zeal to discuss Dameron’s advanced harmonic style, he neglects one of the most recognizable features of Dameron’s arrangements:  his unique inner voice parts which were as interesting as the lead parts. For all of the harmonic subtleties, Dameron’s music felt linear due to the warmth of the interior lines. In a famous quote, Dexter Gordon said that he loved playing Dameron’s charts because even the second tenor sax part was beautifully written. Oddly enough, Combs includes this quote in his narrative, but moves to another subject without elaboration. There are many musical examples in this book (and Combs had access to several of Dameron’s scores, including unrecorded charts) but hardly any of Combs’ discussions explore this primary aspect of his music and none of the examples include an full score with each individual line.

In keeping with its scholarly presence, the book is heavily annotated. The end notes include several citations for the publisher’s website, where several pages of supplementary material are available on PDF files. The online information is quite valuable, but it’s not clear why the bibliography and discography were not included in the print edition. Further, some of the musical analysis that appears online might have been very useful within the printed text. Since the text runs just over 200 pages, it seems strange that the reader must consult the website to get the full story. However, in one important aspect, Combs does exactly the right thing: he lists currently available CD issues for most of Dameron’s recordings. While these listings may change over the years (and one would hope that updates would turn up on the website), Combs keeps the focus on Dameron’s recorded legacy, which is precisely the point of our attention.