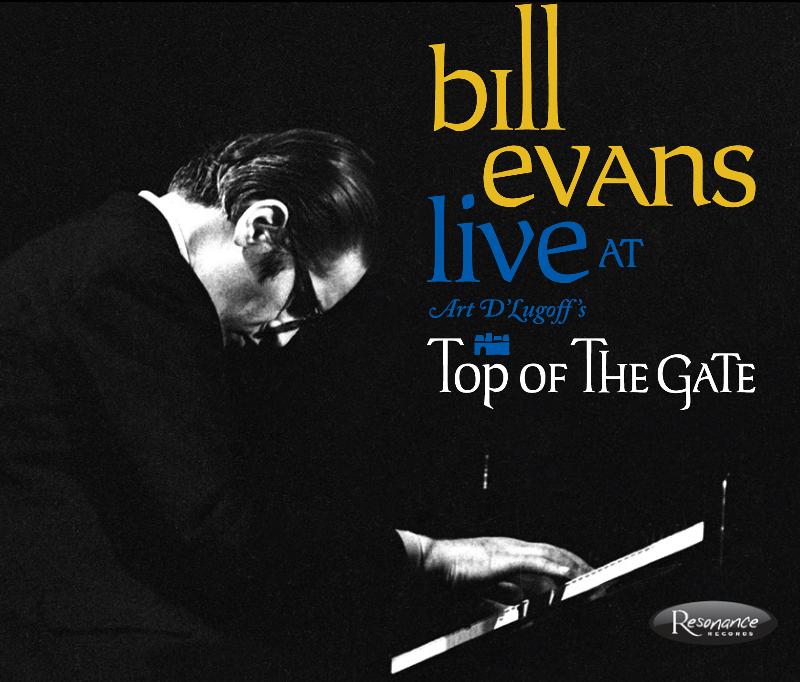 In a dramatic example of the difference between jazz fans and everyone else, the name of pianist Bill Evans is virtually unknown to the world at large, but in the jazz world, he is revered as one of the greatest influences in the music’s history. Like Charlie Parker, Miles Davis and John Coltrane, the mere presence of Evans on a previously unissued recording is enough to spawn significant jazz album sales, even if the music or the audio is of dubious quality. Thankfully, the latest vintage Evans recording, Resonance’s “Live at The Top of the Gate”, is an important and superbly recorded document of the Bill Evans Trio at an important time in their evolution.

The Top of the Gate was a New York restaurant and jazz club situated directly above the famous club, The Village Gate. Evans was a regular performer at Top of the Gate, and he brought his trio in for a month-long engagement starting October 15, 1968. Eddie Gomez had been Evans’ bassist for about a year and a half, and as he states in the liner notes, he was starting to feel comfortable as part of the group. Evans had used several different drummers (including Philly Joe Jones and Jack DeJohnette) in months prior, but hired Marty Morell as his drummer for the Top of the Gate appearances. As it turned out, Morell’s tenure in the trio would continue for the next five years. On October 23, George Klabin recorded the trio’s first two sets for a one-time broadcast on Columbia University’s radio station, WKCR-FM. Those recordings, newly restored, comprise Resonance’s 2-CD (and 3-LP) release.

Klabin recorded with four microphones and mixed directly to two-track stereo. He used close-in miking which reduced the ambiance and noise from the room while emphasizing the mechanics of the instruments. One can hear the piano’s keyboard action as Evans leans into the instrument, Gomez’ fingernails scraping the bass soundboard, and the resonance of Morell’s floor tom and bass drum. The recording also adds to the aggressive feel of this music. The first set seems especially edgy, with Evans accenting three-against-four patterns to create cross-rhythms with the rest of the trio. While the model for the trio’s three-way improvisations was still Evans’ trio with Scott LaFaro and Paul Motian, Gomez was a busier player than LaFaro, and with his prominent sound, there seems to be more competition between the melodic voices of piano and bass. Morell seems to have found his niche fairly early; only a week and a half into the gig, he intuitively found ways to insert his active and swinging brushwork into the trio’s sound.

There are 17 performances on the Resonance set, all rather compact for a live set (the longest cut is 7 minutes). The repertoire includes several surprises, including the first Evans trio versions of “My Funny Valentine” and “Here’s That Rainy Day” (the latter was part of the solo album, “Alone”, recorded just days earlier). Two pieces from the LaFaro/Motian trio book turn up for isolated performances: “Witchcraft” gets its first Evans recording since 1959, and “Autumn Leaves” returns to the book for what would become an extended stay, with several more recordings made within the next 5 years. While only one Evans original appears here (a gorgeous take on “Turn out the Stars”), there is also a quiet version of Earl Zindars’ “Mother of Earl”, a piece that no one but Evans recorded during the pianist’s lifetime. Three songs appear in both sets: “Emily”, “Yesterdays” and “Round Midnight”, and the versions reveal great differences in both the solos and the general rhythmic feel of the group (as intimated above, the second set is generally more relaxed than the first, and the recording sequence seems to show the trio gradually settling into the evening’s groove).

As with Resonance’s historic Wes Montgomery album, the Bill Evans set comes with extensive liner notes, featuring contributions from several authors and musicians. The Evans set booklet effectively establishes the mood of the time with vintage photographs and advertisements from the trio’s Top of the Gate appearance. Unlike some earlier Evans “discoveries”, Resonance’s set truly adds important music to the Bill Evans discography. Let’s hope that George Klabin releases many more recorded treasures in the near future.