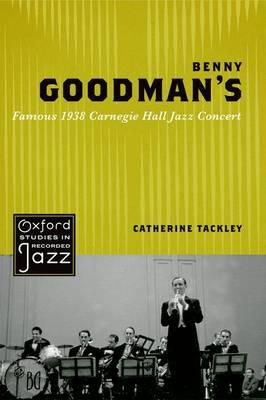 January 16, 2013 marked the 75th anniversary of Benny Goodman’s concert at Carnegie Hall. Unfortunately, the anniversary did not spur Sony Music into releasing a cleaned-up version of the concert CD (more on that later), but the commemoration did yield several commemorative concerts and a new monograph from Oxford’s Studies in Recorded Jazz series, “Benny Goodman’s Famous 1938 Carnegie Hall Jazz Concert” written by British clarinetist and jazz scholar Catherine Tackley. Tackley has first-hand experience playing the Goodman repertoire, including performing Goodman’s parts herself.

Tackley’s book is split into three main sections, titled Context, Performance and Representation. The Context section is undoubtedly the best section of the book. Tackley has done a superb job in tracing the history of Carnegie Hall’s jazz and jazz-like concerts which preceded Goodman, and she has found valuable first-hand reviews of the Goodman concert. She recounts the familiar tales of Goodman’s rise to fame, but also offers rarely-told tales of the “ickies”, non-musicians whose frantic demonstrations at swing concerts reflected their fascination with the non-musical aspects of the band. The layout and content of the musical program is carefully scrutinized, with special focus on what pieces had been commercially recorded or played in feature films.

Unfortunately, Tackley’s attention to detail, so useful in the opening section, becomes a hindrance in the Performance section. For 105 pages, Tackley dissects every performance on the Carnegie program, offering musical analysis and painfully dry discussions of the music. Any sort of musical analysis can be tough reading, but for all of the effort Tackley exerts in the process, she finds very few details of any interest. Basically, Goodman’s studio recordings of this material weren’t terribly different from the Carnegie Hall versions; the “Twenty Years of Jazz” recreations were basically faithful to the original recordings, and many of the musicians in the big band played memorized solos instead of improvisations (Takley quotes tenor saxophonist Art Rollini as saying that he had improvised freely during his early days in the band, but that Goodman had pressured him to set his solos). Frankly, that’s not enough material to justify 105 pages of a 200 page book, and Tackley should have shortened or abandoned this section. Similarly, the long discussion of the film “The Benny Goodman Story” from the Representation section seems pointless (most jazz fans know that Hollywood rarely gets things right when telling the life stories of jazz musicians).

Personally, I would have liked to have seen more discussion of the various recorded editions of this concert. Many Baby Boomer jazz fans grew up with the LP version of this album, originally released by Columbia in 1950 and kept in-print on LP and then CD until supplanted by Phil Schaap’s controversial CD reissue in 1999. Those who owned the vinyl felt that they knew the sound of this recording–quite full-bodied with very little surface noise. Using newly rediscovered source discs, Schaap restored everything: two songs by the big band, the complete “Honeysuckle Rose” jam session, plus stage announcements, and long sections of applause followed by silence in anticipation of the next number. What Schaap didn’t do was remove the crackles and surface noise from the original discs. He claimed that he wanted to retain musical details which computer programs might remove along with the scratches. Many jazz fans were vehemently upset with this edition, and several European labels have issued complete editions with cleaner sound than the Columbia version. Owing to differences in copyright laws, the European versions are legal on the Continent, but are technically bootlegs here. Near the end of her study, Tackley brings up the controversy, lets both sides of the argument state their cases, but takes no stand herself. Instead, she lists the various CDs in a footnote, and then adds a curious note claiming that on the Schaap and subsequent European versions, the Quartet’s version of “I Got Rhythm” is missing a portion of collective improvisation from the final choruses. She uses that claim to question the completeness of the Schaap edition. However, I have checked my own CD copies of the original and Schaap editions and I have found no differences in the two versions of “Rhythm”. If Tackley had a specific claim, she should have included a score transcription showing the precise spot of the supposed deletion.

In his liner notes, Schaap claimed that the history of the source discs could be turned into a four-act opera including “a lover’s triangle, grand larceny, a high stakes shell game, a great detective story, several charlatans and no heroes.” Since 1999, jazz historians have puzzled over this quote, and Schaap has offered no further explanations. With most (or possibly all) of the principals deceased, someone should uncover the real story about these discs. Tackley could have done this detective work instead of wasting pages on meaningless  analysis. As a result, we’ll have to wait a little longer to see Schaap’s “opera”.