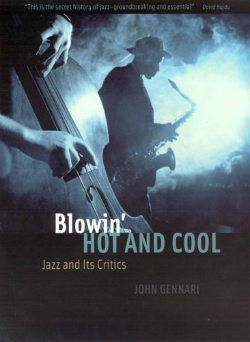 No one ever became a jazz critic to be popular. Musicians reserve their strongest (and usually negative) opinions for those who earn their living publishing their viewpoints on the music. However, history shows us that critics have played a valuable role in the music’s development. Suppose John Hammond had not gone out to the parking lot during a routine Benny Goodman big band set, and had missed hearing the then-unknown Count Basie band broadcasting from Kansas City’s Reno Club. If not for Gunther Schuller’s precise analysis, would we be as aware of the thematic improvisations of Sonny Rollins? And wouldn’t our concept of jazz history be lessened without Martin Williams’ landmark “Smithsonian Collection of Classic Jazz”?

Jazz criticism is a fascinating story, and one that deserves a definitive book. Unfortunately, we’re still waiting for that book. The first attempt to chronicle this part of history, John Gennari’s “Blowin’ Hot and Cool” (University of Chicago Press) is a misguided attempt to frame the stories of America’s finest jazz critics into a psychological/sociological setting. Indeed, about the only thing of value in Gennari’s book is the biographical information about John Hammond, Leonard Feather, Eric Hobsbawm (aka Francis Newton), Ralph Ellison, Nat Hentoff, Martin Williams, Whitney Balliett, Ross Russell, Amiri Baraka (aka LeRoi Jones), Gary Giddins, Stanley Crouch and Albert Murray. These men rarely spoke of their own personal histories, and Gennari spins fascinating tales about how they interacted with each other, and how their personal politics and values influenced their criticism.

Instead of examining each critic’s background and written works to determine their success in describing and promoting the music, Gennari judges them by their social attitudes. He spends an exorbitant amount of ink on the “homosocial” aspect of jazz enthusiasts. He draws a very flimsy argument comparing the masculine activity of performing to the feminine act of listening, and all but claims that any two men who share an enthusiasm for jazz must be some sort of repressed homosexuals. He makes a big deal of the fact that when Feather first came to New York, he and Hammond went to Harlem to hear the best swing bands, but did not dance or bring dates. Is it so unusual that two men who made their living discussing jazz would be interested in listening to the music (especially the British-born Feather, who had rarely heard American bands live)?

When it comes to the music itself, Gennari seems very suspicious of any critic who can write in technical terms. We never really find out how many of the great critics could play an instrument or even read music. Even when trotting out the Charles Mingus quote about a fictional jazz band comprised of famous critics, Gennari goes in a different direction rather than discussing the critic’s actual musical backgrounds. And when it comes to Schuller’s analysis of Rollins, Gennari takes Schuller to task for using technical terms like “minor third” and “tritone” (terms that every musician knows). He compares a dense paragraph of Schuller to an elaborate word painting of Rollins written by Balliett. While the Balliett passage is easier to read, any musician with a year of music theory can understand Schuller and will learn much more about Rollins in the process.

Gennari’s judgments on the critics are widespread, but also selective. In Gennari’s eyes, Hammond couldn’t separate politics from music, Hentoff was forever the Devil’s advocate, Williams was an intense SOB who was tied to his “Great Man” concept of jazz history, Baraka a radical whose writing after the mid-60s was useless, Ross Russell an opportunistic leech who was a pulp writer at the core, and Stanley Crouch a street thug with little or no respect for those who oppose his neo-conservative values. But what of Feather, who would write a glowing essay on an album’s liner, then give a negative review to that same album in “Downbeat”? Not a word about that or any of Feather’s other questionable practices.

In the final analysis, Gennari’s book fails in the same way that much of jazz criticism fails. Most jazz musicians question the abilities of critics who lack a basic music background. Gennari, who is obviously not a musician, is also not a sociologist or psychiatrist. He is an English professor, and one must wonder why he feels qualified to address such topics without the proper background. Despite what Gennari wants us to believe, jazz is a collection of related musical styles. While the social and political climates of the United States have influenced its development, it is the music itself that holds up through the decades. The toughest challenge for a critic is to accurately spot the masterpieces when he hears them and to explain to his readers what makes them important. Thelonious Monk’s attributed quote, “Writing about jazz is like dancing about architecture” is ultimately wrong-headed. Music can be described in prose (and not necessarily with musical jargon). It’s not easy and it’s not always popular, but it is important in keeping this music alive. Just like jazz lives through its recordings, Hammond, Feather, Williams and the rest live on through their words. They deserve a better memorial than the misanthropic mess that is “Blowin’ Hot and Cool”.