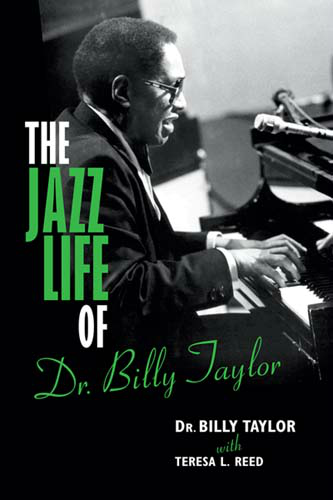 It’s not easy to write an autobiography. It involves a great deal of soul-searching and the excavation of long-buried memories. Since Dr. Billy Taylor was a very good writer with several books to his credit, I’m sure that he had considered writing his memoirs for many years. But Taylor still had an active career as a pianist, television correspondent, concert promoter and overall jazz supporter, and writing an autobiography was too time-consuming to tackle amidst all of his other activities. When he finally started the process in 2006, he brought in Teresa Reed as a collaborator and ghostwriter. As Reed admits in her introduction, she did not have adequate time with Taylor, and sometimes Taylor was more interested in talking about day-to-day activities than in recollections of his earlier life. The resulting book “The Jazz Life of Dr. Billy Taylor” (Indiana University Press) is, at just under 200 pages, woefully lacking in detail and missing the creative spark of its subject.

That creative spark is quite evident when reading Taylor’s 1982 book, “Jazz Piano: History and Development” (William C. Brown). In the first chapter, he takes on no less an authority than André Hodeir. In just one short paragraph, Taylor eloquently dismisses Hodeir’s ridiculous notion that early jazz rhythm came from marches and polkas by simply noting the presence of the same syncopation in spirituals, and recognizing similar rhythms carried over from African traditions. Taylor was also unafraid of including his own contributions within the general arc of jazz history. While such assertions are usually the result of an inflated ego, Taylor seemed more interested in showing what he learned from the great masters. Further, he was willing to admit his own mistakes, notably the thick chords he used when comping on his early recordings.

Unfortunately, that Billy Taylor is rarely found within the new volume. If judging only by the evidence of this memoir, the reader might think that Taylor never had a bad day in his life, and that his childhood in the segregated black neighborhood of Washington DC was little different than Rebecca on Sunnybrook Farm.  Apparently, we are to believe that young Billy experienced no racial incidents during his childhood, and that he spent his early years flushed with pride of his loving family and a long heritage of African-American heroes. The first half of the book is jam-packed with stories about black history icons, and they are introduced through clumsy, awkward prose. For example, one of Taylor’s teachers at Dunbar High School was Mary Europe, sister of James Reese Europe and a fine musician in her own right. After summarizing her accomplishments, the book claims that she calmed down two rough-housing teenage boys by telling them about the black classical singer Roland Hayes. The story, about Hayes quieting an unruly German audience with a peerless rendition of Schubert’s “Du Bist die Rüh” is probably true, but I don’t believe that any teacher would use it to quiet unruly school children! Later in the same chapter, a discussion of Jesse Owens’ triumphs at the 1936 Berlin Olympics opens with this priceless bit of doggerel: “There was a man in Germany named Adolf Hitler whose bigotry and hatred for Jews was quite blatant”. This whitewashed oversimplification is as ridiculous as Hodeir’s assertions about early jazz rhythm, and I can’t believe that Taylor ever saw this part of the manuscript, let alone approved it.

Those readers looking for the major events in Taylor’s life will find them here, but unanswered questions seem to lurk around every event. Taylor’s father stopped paying his son’s college tuition after he changed his major from sociology to music, not trusting that young Taylor could make a living in music. Taylor eventually proved his father wrong by paying his tuition by performing with college bands and hosting his first radio show. But did Taylor’s academic advisor, the respected educator and composer Undine Moore come to his defense? What about the many musicians in his extended family? Taylor broke the segregation barrier several times in his broadcasting career, but we never hear of any problems from TV network executives when Taylor became the musical director on the 1958 educational series, “The Subject is Jazz” or on the higher profile “David Frost Show” of the late 1960s. Taylor received some of his greatest acclaim (and an Emmy) as the jazz correspondent on CBS’ “Sunday Morning”, but instead of a detailed chapter with discussions of his work there, we get a few paragraphs that discuss a mere fraction of his 250 artist profiles. Even his period at the Kennedy Center gets short shrift: the Mary Lou Williams Women in Jazz Festival, which Taylor hosted and produced gets little more than a listing of the first year’s participants and no discussions of the educational and networking outreach that was built into the festival.

One of the book’s biggest omissions is Taylor’s enormous influence on the jazz world. In addition to the musicians he promoted through Jazzmobile, concerts, festivals, radio and television, he took a personal interest in supporting this music by encouraging young musicians, educators, fans and jazz writers—including me. I knew Dr. Taylor for over two decades, and when he passed away in late 2010, I was amazed at the sheer number of people who related the positive effect that Dr. Taylor had on their lives. Put simply, Taylor cared as much about the music’s future as he did about its past. That story needs to be told, even if Taylor wouldn’t have written the chapter himself. There’s an awfully big hole in the jazz world where Billy Taylor used to stand, and it’s a tragedy that his autobiography doesn’t do him justice.