Duke: A Life of Duke Ellington (by Terry Teachout) 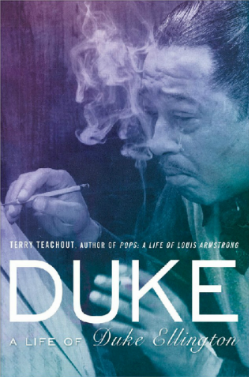 A critical biography can be a dangerous thing. No matter how justified the criticisms may be, the slightest swipe against the character of a revered figure will bring out enormous controversy. Terry Teachout has discovered this first-hand with the publication of his new book “Duke: A Life of Duke Ellington” (Gotham). Because his book discusses Ellington’s flaws as well as his strengths, Teachout (and some critics who have given his work a positive review) have been accused of blatant racism. While his book is far from perfect, Teachout has done an exemplary job of researching and compiling information about Ellington’s life. We learn about his relationships with musicians, managers, journalists and several paramours through contemporary press reports and several eyewitnesses. Throughout the narrative, we can trace the recurring strengths and weaknesses of his character and see how they manifested themselves in later years. Teachout also offers a complete survey of Ellington’s music and he has corrected earlier scholars on improperly transcribed and analyzed harmonic structures, and offers his own illuminations on Ellington’s music (including his seemingly atonal passages in “The Clothed Woman”).

It is when Teachout offers his opinions that he gets into trouble. From the opening pages, he accuses Ellington of having insufficient training in composition and music theory. He argues that Ellington’s pieces would have been so much better had he learned to develop thematic ideas in the manner of classical composers, and had studied symphonic scores to understand how to create unified extended compositions. The argument contradicts everything we know about Ellington. He was, above all, an individualist. No one spoke, led a band, played the piano or wrote music like him. Ellington built all of these elements from the ground up, and there are very few obvious models that he followed. He consistently referred to his own music as “Negro music”—not jazz, not classical, not the music of any other artist. In short, Ellington set himself apart, and he had no desire to copy or to be compared to others. To take up the study that Teachout suggests would have compromised the very core of Ellington’s values. Secondly, the developmental techniques that Teachout cites are regularly used—sometimes subconsciously—by improvising soloists. Having an extensive development section in a score would have taken time away from those soloists, and could have restricted their own creativity. Further, the whole educational concept of applying classical ideas to other forms of music is a fairly recent development; it certainly wasn’t around when Ellington was developing his style in the twenties (when jazz was considered “the devil’s music” and blacks had few opportunities for higher education).

Teachout’s flawed hypothesis leads him to fault nearly all of Ellington’s suites and extended compositions. He calls “Black, Brown and Beige” a patchwork, a not-quite-unified composition of which stretches of sustained musical argument were linked by transitional passages that sounded as though they had been lifted from the score of a Broadway musical. Teachout admits that the critics of the time had only one chance to hear and evaluate this new work, but is Teachout doing the work any better service by criticizing the transitions rather than focusing on the “sustained musical argument”? Later in the book, he dismisses the Shakespeare suite “Such Sweet Thunder” because it was “a collection of unrelated pieces”. But can we truly claim that Shakespeare’s plays were united by anything except his distinctive style? Teachout seems to ignore the compositional excellence in both “Thunder” and the later “Far East Suite”, saving his highest praise for the First and Second Sacred Concerts.

Like many biographers before him, Teachout accuses Ellington of being a musical poacher, claiming credit for pieces he did not write, and not properly acknowledging his collaborators. Ellington was guilty of that charge many times over. There was no excuse for him to claim credit for music that Billy Strayhorn wrote alone, and it is certainly true that Ellington didn’t do nearly enough to promote the work of his talented writing partner. However, when Ellington took on the job of collecting and modifying the raw material that his band members improvised on stage, he had every right to claim compositional credit. If we assume that Ellington was not transcribing the solos note-for-note on the bandstand, we can be rather sure that he reconstructed and developed the ideas from memory. Thus, what appeared on the score could have been as much from Ellington’s imagination as the horn of Johnny Hodges. Of course, Ellington should have shared credit, but it was his gift for gathering and organizing these musical ideas that made them immortal.

While I cannot agree with many of Teachout’s arguments about Ellington’s music, I feel compelled to defend him on the charges of racism. Teachout only makes one overt comment about blacks in general, and it is that they sometimes gave preferential treatment to those with lighter skin tones. Teachout calls that “a dirty little secret”, but this rather dubious notion has been widely reported by both black and white commentators. Otherwise, Teachout seems genuinely respectful of Ellington’s efforts to support his race through his music and his dignified appearance (Ellington called it “acting on behalf of the race”). As a biographer, Teachout has the right to criticize Ellington’s personal and professional life. He makes no generalizations between Elllington’s behavior and other blacks, because there are none to be made. Just because Teachout and many other jazz critic/historians happen to be white is no excuse for blacks to lash out when their heroes are criticized for their individual shortcomings. Teachout’s book will have great value to future scholars. It is unfortunate that the tempest created by both Teachout and his detractors has clouded the importance of this historical volume.