Big Bands Of Our Time

CHRISTINE JENSEN: “HABITAT” (Justin Time 8583)
With the release of her second big band album, “Habitat”, Christine Jensen is now finding her own identity as a composer. While her previous 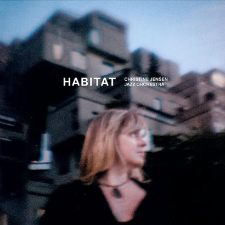 album, “Treelines” was, at least to my ears, too indebted to Maria Schneider, I hear more individuality in her scores for the new CD. The opening track, which is called “Treelines” but did not appear on the earlier recording, uses a tone row for both the composition and the improvised solos. Christine’s sister, trumpeter Ingrid Jensen, deftly handles the unique solo restrictions as well as the many mood and tempo changes throughout the work. “Tumbledown” refers to the earthquakes in Haiti, but it is not a strictly programmatic work; rather it seems to deals with the calm before the earthquake and the sorrow of the victims after the destruction. It opens with a finely developed theme which originates from a simple but highly rhythmic motive. The center section of the piece is sad and intense, with tenor saxophonist Joel Miller and trombonist Jean-Nicolas Trottier soloing separately and together. “Nishiyuu” was inspired by a 45-day, 1500-kilometer walk by six Canadian Cree Indians who wanted to raise awareness about issues facing their people. There is a great sense of nobility throughout this piece, and while some of it still sounds a lot like Schneider, the originality of Jensen’s concept comes through in her selection of instrumental colors (especially in the closing minute of the work) and the way she varies the backgrounds behind tenor saxophone soloist Chet Doxas. The final track, “Sweet Adelphi”, is a piece that the Jensen sisters regularly played in their quintet, Nordic Connect. Here it is expanded for the full orchestra featuring Christine’s soprano sax and Ingrid’s trumpet. Christine is an arresting soloist, and she should feature herself more often with the band. Both as a soloist and as a composer/arranger, hers is a talent deserving wider acclaim.

PETE McGUINNESS: “STRENGTH IN NUMBERS” (Summit 627)
In addition to his prowess as a trombonist and singer, Pete McGuinness is a professor of jazz arranging at Willia 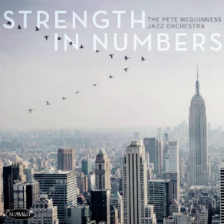 m Paterson University. The arrangements on his new big band album “Strength in Numbers” sparkle with brilliant orchestral colors while maintaining rhythmic vitality. The CD’s opening track, “The Send-Off” was written in memory of Bob Brookmeyer, and McGuinness cites Brookmeyer’s ability to create full-scale works from small musical gestures. McGuinness uses that technique in “The Send-Off” and just about everywhere else on the disc. The waltz treatment of “What Are You Doing the Rest of Your Life” has a wonderful bass clarinet riff (played by Dave Reikenberg) and the introduction of “Trixie’s Little Girl” has the saxophone section turning the tune’s main riff in several different directions. On “Beautiful Dreamer”, he uses Stephen Foster’s melody as the basis for both the introduction and the solo backgrounds, and then at the end, he includes a duet based on Foster’s original piano setting. McGuinness has assembled 16 outstanding New York musicians, who play these arrangements with zest and passion. He has been quite democratic in splitting up the solo time: over the 70+ minutes of this disc, everyone in the band (save the two lead trumpets) gets a solo spot. The duet of tenor saxophonist Tom Christensen and drummer Scott Neumann enliven “The Send-Off”, Dave Reikenberg plays a fine baritone sax solo on “The Swagger”, trumpeter Chris Rogers and tenor saxophonist Jason Rigby play thoughtful solos during “Spellbound”, and McGuinness is featured on four tracks (including a lovely instrumental solo on “Trixie’s Little Girl” and a Chet Baker-inspired vocal and scat on an atmospheric “You Don’t Know What Love Is”). The rhythm section of pianist Mike Holober, bassist Andy Eulau and drummer Scott Neumann is a marvel throughout, driving the band through McGuinness’ complex but always swinging charts.

DAVID WHITE: “THE CHASE” (Mister Shepherd 10615)
There is a great urgency to the music on David White’s album, “The Chase”. It was funded by a Kickstarter campaign, and while the disc only runs 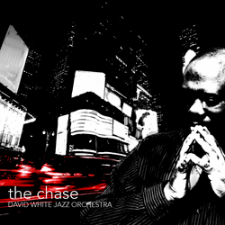 34 minutes, all of it was recorded in a single day. Perhaps the need to get these arrangements on tape with a minimum of retakes gave the music its undeniable momentum. As a big band composer and arranger, White rarely surprises the listener with new combinations of instrumental colors, but structurally his pieces are quite compact, and they move forward with astonishing vigor. The opening track, “Mister Shepherd’s Misadventures”, has composed and solo sections in three distinct styles. The soloists, tenor saxophonist Sam Dillon and trumpeter Miki Hirose, are required to solo in all three styles, but White limits their solo time, as the entire piece is over in just over five minutes! The band’s other soloists include pianist Nick Consol and trumpeter Pablo Masis on the hyperactive “And The People Could Fly”, tenor saxophonist Sam Taylor on “The Sweetest Bite of Cherry”, with dramatic tempo changes in unexpected places, and alto saxophonist Andrew Gould and trombonist Dan Reitz on the fast and funky “Shakedown”. White’s trombone is featured on “Persistence”, an agitated piece inspired by Steve Reich’s minimalist masterpiece “Music for 18 Musicians”. Only on the final piece, “Blues for Sally Draper” does the tempo relax and the soloists Rick Parker (trombone) and Omar Daniels (alto saxophone) get the opportunity to stretch out. It’s a very effective contrast to the rest of the album, but I suspect that the CD might have been better as a whole if there wasn’t so much unbridled intensity elsewhere.