Better With A Band

Jazz began as an ensemble music, and even after soloists took the spotlight, ensembles have played a major role in the music’s development. Of course, the composers and arrangers who transformed this improvisation-centered music into written scores were important contributors, but it was the ensemble musicians who brought these scores to life, finding unique ways to phrase the music so that the band created its distinctive personality. The tradition continues today, and the three new CDs reviewed below epitomize the old big band anthem, “It Ain’t What You Do; It’s the Way That You Do It.”

The Vanguard Jazz Orchestra was established in 1965 under the joint leadership of Thad Jones and Mel Lewis. In addition to being the band’s first lead trombonist, Bob Brookmeyer contributed many compositions and arrangements to the group’s library. Although Brookmeyer had written charts for several other ensembles, including the Gerry Mulligan Concert Jazz Band, the music he wrote for the Jones/Lewis band represented a new direction in his music. He exp 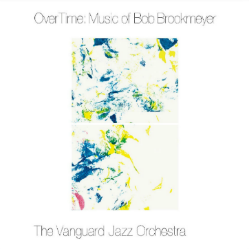 erimented with longer forms, multiple tempos, enriched harmony and tone rows. The latest album from the Vanguard Jazz Orchestra “Over Time” (Planet Arts 101413) offers superb performances of eight Brookmeyer works written between 1979 and 2011, many of which have never been recorded before. Fittingly, the opening piece “The Big Time” features the ensemble rather than soloists, and through the kaleidoscopic score, we can hear the band’s exceptional musicianship and their distinctive behind-the-beat phrasing (especially in the soprano saxophones of Dick Oatts and Billy Drewes). “Suite for Three” follows, with its three movements featuring Oatts (now on alto), flugelhornist Scott Wendholt and tenor saxophonist Rich Perry, respectively. But while these pieces are solo vehicles, the ensemble is an active participant throughout, performing Brookmeyer’s complex scores with dazzling precision and roof-raising swing. As pianist Jim McNeely writes in the liner notes, Brookmeyer had abandoned the conventional tune/chorus structure of writing for big band. The soloist and the ensemble are integrated into one continuous fabric. These pieces flow like rivers and streams; at times the soloist may predominate, but not for long. Like its famous predecessor “ABC Blues”, “XYZ” combines the worlds of 12-tone music and jazz with stunning results. Drewes, Perry, and trumpeter Terell Stafford all have extended solo spots with Brookmeyer’s intriguing musical constructions providing inspiration and support (Trombonist/director John Mosca also solos on this track, and while most of his solo is unaccompanied, it only proves that Brookmeyer also had a great sense of balance!). The album also includes Brookmeyer’s classic setting of “Skylark” (featuring Oatts), his final VJO score “At the Corner of Ralph and Gary” (a joyously swinging feature for tenor saxophonist Ralph Lalama and baritone saxophonist Gary Smulyan) and “Sad Song” (a dramatic work with a strong Asian influence and an eerie wordless band vocal behind Oatts’ flute solo).

The Cookers are usually referred to as a “super-band”, but few all-star aggregations play with the fire of this astounding septet. Over half of the 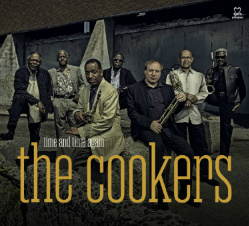 members, including tenor saxophonist Billy Harper, trumpeter Eddie Henderson, pianist George Cables, bassist Cecil McBee and drummer Billy Hart, started their careers in the turbulent mid-1960s, and they bring the same fire-breathing intensity to their performances today (and there is no lack of energy when trumpeter/leader David Weiss and alto saxophonist Donald Harrison play their solos). The group’s fourth album, “Time and Time Again” (Motéma 159) shows that the band has no intention of mellowing. Although the introduction of the opening track, Harper’s “Sir Galahad” sounds like a ballad, the edgy sound of Harper’s tenor and Hart’s active mallets on tom-toms keep the energy level high, and make the transition to a Coltrane-esque modal feel seem like a natural progression. As this track progresses, the horns have recurring background roles which fortify the soloists and support the highly interactive rhythm section. On the stop-and-start theme of McBee’s “Slippin’ and Slidin’”, the horns show that they can punch figures like the brass section of a big band, and at the end of Hart’s “Reneda”, there is a collective improvisation where everyone expresses themselves without getting in the way of the other horn players. Cable’s funky, slow-churning tribute “Farewell Mulgrew” offers a welcome respite from the unrelenting intensity of the other tracks. And that being said, neither “Farewell” nor the disc’s other somewhat low-key piece, McBee’s “Dance of the Invisible Nymph” is entirely without intensity.  While I realize that The Cookers want to emphasize the powerful horn passages and high-energy soloists (and there is no lack of either on this disc), I wish they would display a little more variety in the programming. After all, even Coltrane and Blakey played ballads.

“Coalition” (Half Note 4558) was recorded three years ago, but the band is still active and planning an East Coast tour later this month (September 2014). The group was assembled by pianist Kenny Werner, but the collaborative nature of the ensemble led to the corporate name. It is an international group with guitarist/bassist Lionel Loueke hailing from Benin, saxophonists Miguel Zenon (Puerto Rico) and Benjamin Koppel (Denmark) and drummer 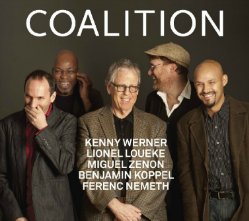 Ferenc Nemeth (Hungary) sharing leadership. The group makes an arresting impact with the album’s opening track, “Phonetics # 2 (Folk Dance)”. Although Zenon is the composer, Loueke probably played a crucial role in realizing the work, as his wordless vocals and the dense complex meter all play a big part in this piece. And while finding the recurring downbeat can be a challenge, the groove is strong and unmistakable. While the rhythm tumbles along, the soloists find ways to embrace or float over the meter while effectively building their statements. Werner’s “April Blue” is only slightly less turbulent. The arrangement has a subtle feature where the saxophonists (Zenon on alto and Koppel on baritone) maintain an insistent riff once their own solos are completed. The building intensity through the solos of Koppel, Zenon, Werner, and Loueke is quite effective. The same idea plays a greater part in Werner’s wistful ballad “Swan Song”. After a delicate piano solo (accompanied only by Loueke’s intermittent bass improvisations) the band returns for Koppel’s mezzo-soprano sax solo. The entrance is quiet and gentle, so not to disturb the delicate mood. As the solo intensifies, Zenon adds another understated melody line as the rhythm gathers momentum. When Loueke takes over on guitar, both saxophonists take up the melody line which seamlessly merges into the theme statement.  Loueke uses a doubler for his vocal on the introduction of his original, “Flying”. When the tempo moves to mixed-meter funk, each instrument has a specific role to play, and while they have freedom with the notes they play, the band maintains a instrumental balance which only shifts when the solo spotlight moves from Zenon to Werner. Although the disc’s final two tracks are not as innovative as the earlier pieces, they are both well-played, and they do not diminish the album as a whole.

The sturdiest traditions can be weakened with constant repetition. The ensemble ideas used on the above albums are not too complex in themselves, and are simply the result of re-thinking the old formulas. Jazz could use a lot more of this kind of innovation. We really don’t need another jazz revolution, but we could use fresh approaches to the established traditions.