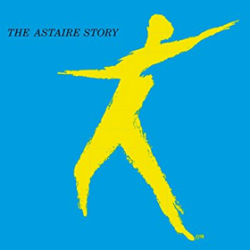 In his liner notes to “The Astaire Story”, Fred Astaire explained his initial reluctance to the project by stating, “I’ve never been a fan of my own singing voice.” Despite Astaire’s intense self-criticism, there were several noteworthy members of his fan club. Songwriters like George and Ira Gershwin, Irving Berlin, Jerome Kern, Dorothy Fields, Cole Porter, Harold Arlen, and Johnny Mercer trusted Astaire to debut their greatest songs. They knew Astaire would sing the notes as written, but would also use his love of jazz to loosen the rhythms and impart a casual delivery. Outside of the studio scene, the teenaged Norman Granz was also a confirmed Astaire fan. He saw the film “Top Hat” at least 20 times, and even took tap lessons with the hope of performing in the chorus line of a future Astaire movie. That dream never came true, but in 1952, Granz called Astaire to discuss a proposed 4-LP set tracing the singer/dancer’s career. Astaire did not recognize Granz’s name and turned him down flat. However that same night, Granz, Astaire and Astaire’s son, Fred, Jr., found themselves seated together at a Duke Ellington concert at LA’s Shrine Auditorium. Astaire Junior owned several of Granz’s Jazz at the Philharmonic records, and he reminded his father that they had listened to them together at home. Astaire Senior took renewed interest, especially when Granz used his deluxe album “The Jazz Scene” as the model for the proposed Astaire set.

Granz and Astaire worked tirelessly over the next few months, picking tunes and developing the album’s concept. The accompanying group was a sextet from JATP. Trumpeter Charlie Shavers and tenor saxophonist Flip Phillips comprised the front line, with the Oscar Peterson Trio (pianist Peterson, guitarist Barney Kessel and bassist Ray Brown) forming the rhythm section along with drummer Alvin Stoller. Each musician realized that this was primarily a spotlight for Astaire, but while their principal roles were as accompanists, the arrangements allowed solo spots for all the players. According to the surviving documentation—as well as contemporary discussions— there were between 13 and 15 sessions held for this album, a number that might seem at odds with Granz’s penchant for marathon recording sessions. According to author Todd Decker, Astaire was filming “The Bandwagon” at MGM during this time, but it was a short drive from MGM’s studios in Culver City to Radio Recorders in Hollywood (where the album was made), so it’s likely that Granz was willing to schedule shorter sessions to accommodate Astaire. Considering that Astaire was obsessive about rehearsals, we can be sure that some of the sessions were non-recorded run-throughs. Gjon Mili’s session photos show Astaire in four different outfits, and while it is possible that Mili only took photos on one day and asked the musicians to change clothes on a few occasions, four recording sessions for 38 songs seems about right for a Granz project of this magnitude.

As everyone—except the featured singer—expected, Astaire fit comfortably within the context. The mood is much more subdued than a JATP concert. The band maintains a relaxed groove throughout, even when playing at slower tempi. Astaire’s opening “Isn’t This a Lovely Day” is tender and melancholy, enhanced by his occasional chuckles and spoken asides. True to his form, he treats the melodies with great respect, but his rhythmic approach brings a personal interpretation to each song. On “Puttin’ on the Ritz”, he finds an ally in Stoller, who provides outrageous fills throughout the track. On the second chorus, Astaire echoes Stoller’s propulsive accents with exploded consonants on the off beats. Most of Astaire’s improvisations occur on the dance tracks later in the set, but I love his off-handed humming on “I Used to Be Color Blind” and “Lovely to Look At”, the near scat on “I’m Putttin’ All My Eggs in One Basket” and his increasingly loose rhythmic play on “Top Hat” and “No Strings”. Starting with “The Carioca”, several of the tracks open with spoken preludes by Astaire. It’s something of a shock to hear Astaire addressing the audience directly—something he never did on stage or screen—but it adds to the relaxed atmosphere of the album. Later, he explains that on the three dance tracks, the silence in the tap lines represent the moments when he is in midair. With the Mili photos as a visual guide, we can fill in the motions as Astaire joins into the improvisations. The one track where Astaire joins us as listeners also had a spoken introduction, but due to an internal reference to one of Astaire’s original songs (which appears later in the revised sequence), the introduction to “Jam Session for a Dancer” was excised from the current reissue. Frankly, the reissue producer’s idea to use related instrumentals (including this jam session) to create a faux overture, entr’acte and exit music does not justify the editing of the original album, even if no music was lost in the process.

The original 4-LP set sold for $50—quite pricey for its day—and for years, it was an out-of-print and highly prized collector’s item (at press time, an original pressing of the set was selling for $800 on eBay). The album was reissued on LP by DRG in 1978, and then by Verve on CD in 1988. Those who own the earlier CD set may want to keep it, as the sound is about the same as on the new version, and the old booklet contains Astaire’s original liner notes and better reproductions of the Mili photos. The booklet for the new set, tucked in a sleeve behind the second CD, is a little hard to find (so much so that at least one reviewer claimed that there was no booklet at all!) and the bonus tracks are related—but unnecessary—fillers. Regardless of which version you purchase, the musical quality of this historic set makes it a natural for jazz lovers, Astaire fans, and the majority of us, who are both.

Concurrent with the reissue of “The Astaire Story”, Verve has released a 60th anniversary edition of “Funny Face” (Verve 27336). Except for the “beatnik dance” titled “Basal Metabolism”, the film is not a jazz score, but the music holds up well, with vocals by Astaire, Audrey Hepburn and Kay Thompson. The reissue co-producers Didier C. Deutsch and Mike Piancenti have restored dialogue edited out of the original LP release, and sequenced the songs in the same order as the film. The CD also includes several alternate versions of the songs, mostly from rehearsals and early run-throughs. The album is pleasant and well-conceived, but not nearly as essential as “The Astaire Story”.