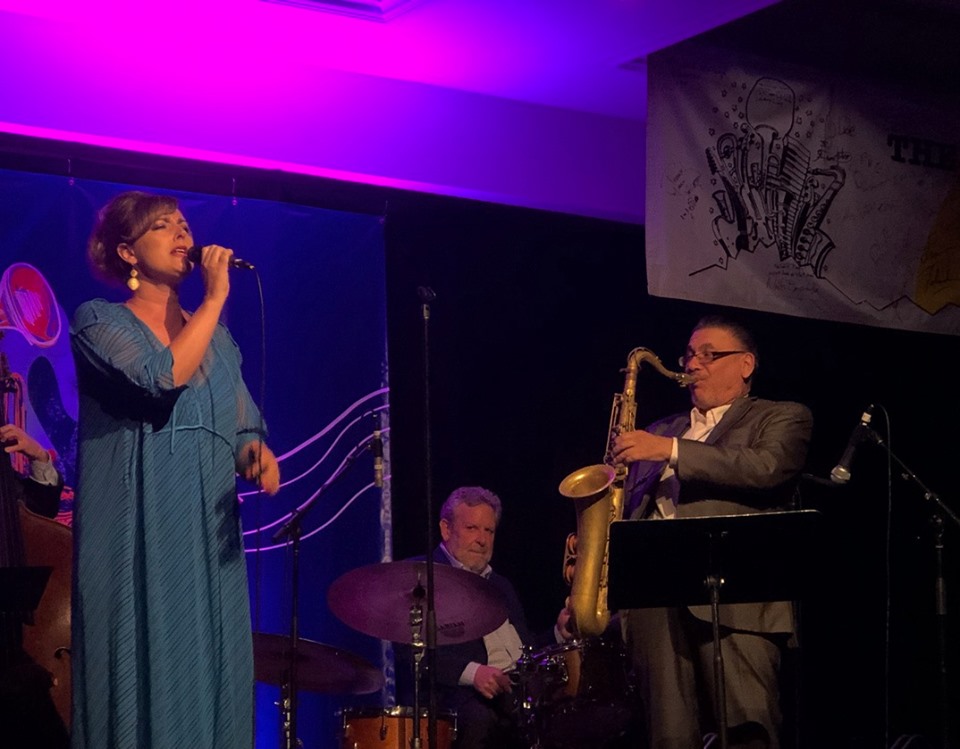 In the months when its streets are not filled with skiers and snowboarders, the tiny village of Vail becomes one of Colorado’s cultural meccas. All of the major art forms have summer festivals here: classical music, dance, film, visual art, and jazz. The Vail Jazz Party, which celebrated its silver anniversary this year, stands as the granddaddy of them all. It has grown from its humble origins as a quickly-organized three-day event to the anchor of the summer-long Vail Jazz Festival. The party now takes place in three separate venues—the Marriott’s Grand Ballroom (evening events and film screenings), the Lionshead Arts Tent (for afternoon concerts) and—new this year—the Gerald R. Ford Amphitheatre (for the extremely popular Sunday morning Gospel Prayer Meetin’.) The events are scheduled so that patrons can—at least in theory—attend all 50 hours of music presented over four days. The basic premise of the party—presented by artistic director Howard Stone—remains the same: a casual gathering of musicians with plenty of opportunities for interactions between fellow players (on and off the bandstand) and their loyal fans. Many of the musicians return every year for the challenge of performing with musicians they would not normally encounter during the rest of the year. The fans return because they love the atmosphere, and to hear the latest musicians that Stone has recruited into “the family”.

Some of those discoveries can be found within the ranks of “The Vail Jazz All-Stars”, a group of auditioned high school musicians from across the US. The fourteen teenagers participate in an intensive week-long seminar which culminates in three performances at the Jazz Party. Over the years, the Vail Jazz Workshop has featured such future stars as Robert Glasper, Grace Kelly and Justin Kauflin. In addition to the new batch of All-Stars, this year’s party featured an alumni quintet which performed together on Thursday night and Saturday afternoon. Throughout the rest of the weekend, individual members of this group offered support for the party’s headliners. Bassist Marty Jaffe performed an outstanding solo on “Sophisticated Lady” during Byron Stripling’s Monday afternoon set, alto saxophonist David Milazzo offered stunning obbligati and solos in Saturday night’s shared set with vocalists Niki Haris and Sinne Eeg, and Kenny Banks, Jr. fired up Monday afternoon’s set of piano duos with soulful improvisations and a deeply grounded sense of jazz rhythm.

Trombonist Wycliffe Gordon has been part of the jazz party family for the past eight years and in that time, he has presented several memorable events—including a night where he played every instrument in the jazz ensemble, including piano, bass, drums, trumpet and trombone! At this year’s party, Gordon’s Sunday performances demonstrated his wide range of stylistic influences and broad knowledge of pop and jazz genres. In the morning, he joined Haris for the Gospel Prayer Meetin’, a two-hour service that draws upon the roots and contemporary styles of black religious music. Gordon was the star soloist, enriching an already powerful event with his boisterous—and historically accurate—solos and backgrounds (More on the Meetin’ below). Later in the afternoon session, John Clayton introduced the final number by the Vail All-Stars by acknowledging Gordon’s help in teaching the students classic New Orleans style. Then, in the finale to the afternoon concert, Gordon appeared as leader of the “Nu-Funk Dance Machine Party”, which featured several of the party’s resident horn players in tightly-played covers of pop dance hits like “Jungle Boogie”, “Boogie Down” and “Cold Sweat” (the last featuring Haris as guest vocalist). For this portion of the event, the chairs were pushed to the back of the tent to create a large dance floor. The large audience (including Stone and his wife Cathy!) joined into the merriment.

Niki Haris has also evolved in her years at the party. The last time I attended (2014) she seemed uneasy during her evening jazz set, singing well, but talking a little too much between numbers. This year, her jazz set was very tight: a focused group of songs held together with well-constructed patter. Her exuberance won over the crowd, and she transfixed them with emotional renditions of “A Lot of Livin’ to Do”, “Since I Fell for You” and “God Bless the Child”. Haris has transformed the Gospel Prayer Meetin’ into a powerful showcase for her considerable talents. The opening section of the service featured Haris in several gospel pieces that sounded quite contemporary to my ears. Everything—except for the instrumental solos—seemed to be written out, with effective parts for the Mile Hi Gospel Choir (led by Joslyn Ford-Keel), and the horn section (with Terell Stafford and Stripling on trumpets, Gordon on trombone, and Adrian Cunningham on alto sax). At the midway point, Haris and the choir left the stage, and the band (with Bobby Floyd on Hammond B3, Mitch Forman, piano and Jerohn Garnett, drums) revisited the Gospel Prayer Meetin’s of old, with improvised arrangements of “Down by the Riverside” and “Just a Closer Walk with Thee”. When Haris and the choir returned, they also revisited some classic spiritual songs, including “Down to the River to Pray” and a medley of “In the Garden” and “Softly and Tenderly”. The Gospel Prayer Meetin’ has become the most popular event of the jazz party, and the 1250-seat Ford Amphitheater was filled with a huge crowd of party attendees and Vail citizens.

Guitarist Diego Figueiredo was spotlighted in a live recording session Saturday night, featuring duets with many of the party’s instrumentalists. Most of the music reflected Figueiredo’s Brazilian heritage, and not surprisingly, the American musicians leaned towards songs by Antonio Carlos Jobim, João Gilberto, and Luis Bonfá while the international players played the more obscure Brazilian folk music. Fellow guitarist Olli Soikkeli played a rhythmic choro, pianist Bill Cunliffe offered a gorgeous slow-tempoed version of “Wave”, John Clayton performed a rich arco bass solo on “One-Note Samba”, Adrian Cunningham collaborated on an exquisite piece called “Carinoso”, Terell Stafford performed an emotional version of “Triste” and Wycliffe Gordon capped off the duets with a rousing version of “Caravan”. Ken Peplowski, who just released an album of duets with Figueiredo, presented the evening’s highlight, a free improvisation which offered stunning counterpoint between the two instruments.

Figueiredo was also part of Peplowski’s delightful Sunday afternoon set, which included guitar/tenor sax duets on “Zingaro” and the opening chorus of “Cheek to Cheek”.  The set also included a version of “So Danco Samba” with Ernie Adams forgoing his drumsticks to play shakers with one hand and drum heads and cymbals with the other! Peplowski played raconteur throughout the set, introducing “Stompin’ at the Savoy” with the comment that he once worked for Benny Goodman. From behind his drum kit, Adams quipped “yeah, parking his car!” Without missing a beat, Peplowski sarcastically announced that Adams was about to enter involuntary retirement from music. When everything calmed down again, the band played a romantic slow version of the Edgar Sampson standard, with Nicki Parrott contributing a wondrous bass solo. The set closed with a ridiculously fast version of “Cherokee”.

As mentioned above, Sinne Eeg shared a set with Niki Haris on Saturday night. On paper, this pairing made little sense: Haris, a powerfully emotional singer with deep roots in soul and R&B, alongside Eeg’s cool delivery and carefully-composed jazz originals. Yet, the contrast worked to both singers’ advantage, and when the two sang together on “Better Than Anything” and “Further On Up the Road”, each singer showed that they could adapt their styles to accommodate their partner.

When Eeg took the stage alone on Sunday night, she performed an outstanding set which alternated between cherished standards like “Come Rain or Come Shine” and  “Cry Me a River” and evocative originals like “Streets of Berlin” and “Samba em Comum” (the latter being a Portuguese song written to protest the possible demise of the Danish jazz radio network!). Eeg showed a command of three different languages (plus exquisite behind-the-beat scat) and she altered the timbre of her voice to amplify the message of each lyric. Her accompanists included the superb pianist Jacob Christoffersen, bassist Martin Wind, drummer Jeff Hamilton and tenor saxophonist Jerry Weldon.

Multi-media historical presentations have been a part of the Vail Jazz Party for many years. Usually, Howard Stone envisions the concept of each program and assigns it to a featured musician. However, this time Adrian Cunningham approached Stone with the idea for a history of jazz flute. The result was both very entertaining and highly informative. Starting with Cuban flutist Alberto Socarras—who recorded the first jazz flute solo on a 1927 Clarence Williams recording—and moving through masters like Wayman Carver, Frank Wess, Herbie Mann, Rahsaan Roland Kirk, Yusef Lateef, Eric Dolphy and Hubert Laws, Cunningham introduced the outstanding film clips with well-researched information. Cunningham had fun with the a/v technology: He added perfectly timed spaces within Wess’ version of “Cute” so that Cunningham’s live band could trade fours with Wess and the Basie band! Later, the presentation included some very funny photoshopped pictures which found Cunningham spoofing Mann’s infamous cover for the LP “Push, Push”, and then placed Cunningham within various flute-centered folk groups from around the world.

Cunningham was one of three Australians in this year’s artist lineup—the other two were Parrott and trumpeter/trombonist James Morrison—and they performed together in a delightful Monday set titled “Two Blokes and a Sheila”. At one point, Morrison noted that many Australian musicians were multi-instrumentalists. Dismissing the group’s non-Australians (Adams and pianist Larry Fuller), Morrison proposed doing a piece with each musician playing on an instrument they didn’t normally play. Parrott said she would sing, but Morrison insisted that wasn’t enough as she usually sings on her gigs. Parrott replied that she’d think of something else to play. Meanwhile, Cunningham went to the piano, and Morrison picked up Parrott’s bass. After singing the first chorus of “They Can’t Take That Away from Me”, Parrott—playing her moment to the hilt—looked around for another instrument. She finally settled on Cunningham’s flute and she played a simple but well-constructed solo. Morrison and Cunningham played equally-impressive solos on their newly-adopted instruments.

As I have not attended the Vail Jazz Party in several years, there were a few new features I hadn’t seen before. One was the new video system, situated at the halfway point on the left side of the Marriott grand ballroom. In addition to the video material for the multimedia shows, the screen presented a live feed of the ongoing performances. The fine close-up shots allowed the audience to see the buttons on Julien Labro’s chromatic accordion, and the facial expressions of the vocalists and instrumentalists. For those of us in the back of the room, the screen gave the performances extra immediacy. The other change was that Howard Stone no longer appeared on stage to announce the artists. That role—essentially the face of the Vail Jazz Party—has been passed down to Vail Jazz’s executive director, James Kenly, who also has taken over the day-to-day operations of the Vail Jazz Foundation. Kenly and the festival staff, including Amanda Blevins, Cara Loux, Brittney Wong, Connor Williams, Meghan Scallen and Mary DiLuccio kept this edition of the Jazz Party running smoothly, each taking on whatever tasks needed immediate attention. It was a pleasure to attend the Jazz Party again, and I look forward to many return trips in the coming years.

Thanks to the Vail Jazz Festival staff, and all of the photographers.