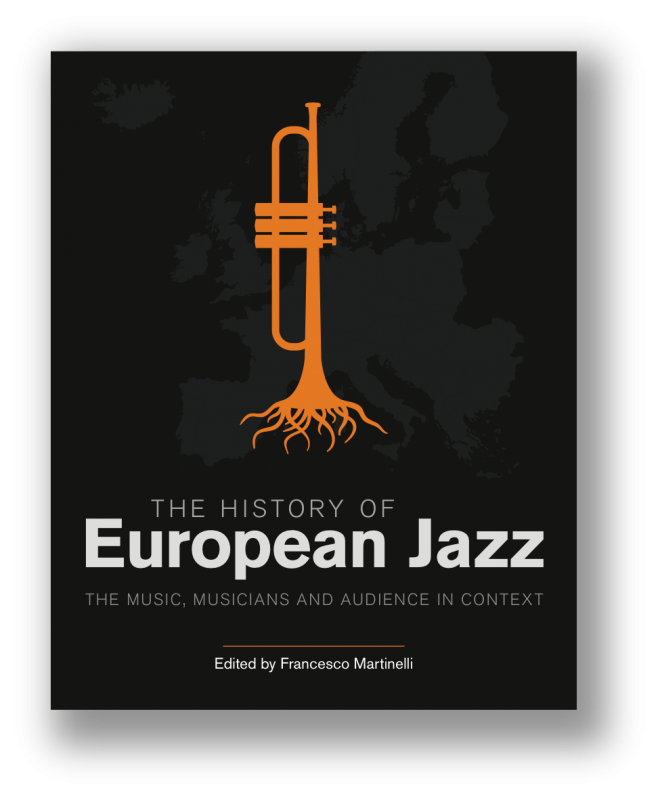 THE HISTORY OF EUROPEAN JAZZ (edited by Francesco Martinelli)

A current meme reads, I just received thousands of words in the mail. That’s the last time I order a dictionary from IKEA. I get the same feeling after examining Equinox’s mammoth volume “History of European Jazz”. Somewhere within the 742 double-columned pages of this book lay the basic elements of a coherent and engrossing study of jazz on the Continent. But because Equinox decided to make this a reference book instead of a comprehensive narrative, the reader must see the similarities in how jazz spread in different countries, then piece the story together in their mind. It’s like a gigantic three-dimensional jigsaw puzzle.

The book collects the knowledge of around 40 different critics and historians, all of whom specialize on the jazz of their home country. The first 34 chapters discuss the history of jazz in each country of Europe. Naturally, the larger countries like France, Great Britain, Italy, Sweden and Russia receive the largest number of pages—usually around 40 pages—while smaller countries get progressively less (Kosovo gets exactly one paragraph!). The essays typically take the same form: the introduction of jazz to the country shortly after World War I—usually through travelling musicians or departing US servicemen, the development of local artists, Hitler’s reign of terror leading to World War II and how (if at all) jazz survived Nazi occupation, the rise of Communism and the Iron Curtain in Eastern Europe–leading to the eventual shutdown of all jazz activities (or in Western Europe, the debates between bop, cool and revivalist Dixieland), the emergence of free jazz across the Continent, and a roll call of each country’s most popular contemporary performers. That’s a lot of material to fit into an essay, and some of the chapters turn into endless parades of names which are unfamiliar to most jazz fans. In a way, this is analogous to someone writing about the local jazz scenes in major US cities. Most jazz fans know the local musicians who play in area clubs, but if those musicians do not tour or record, very few people know them outside of their municipalities.

The necessity to cover the totality of a country’s jazz history within a relatively brief essay ultimately means that the authors cannot discuss any particular musician in depth, even if that musician played a critical role in the country’s musical development. Thankfully, Django Reinhardt gets the lion’s share of a supplemental chapter on “Jazz Manouche” (appearing at the end of the volume), and the tragic story of the Jewish/Polish trumpeter Eddy—or Ady—Rosner turns up in conflicting but pertinent sections of a few chapters. A late friend of mine, saxophonist Jim Riley earns approximately a page of text in the Irish chapter, not for his playing, but because in the late 1960s, he ran a nightclub in Ashbourne, which brought world-famous jazz musicians to the lush Irish countryside. I guess my old friend was more important in Irish jazz history than I realized! Another supplementary chapter discusses early recordings (1889-1925) by African-American pre-jazz artists. The chapter is keyed to a 57-hour Bear Family boxed set “Black Europe”, which has been out-of-print since 2015. All of the recordings from the set are undoubtedly in the public domain, so anyone who is willing to find these recordings from other sources will find this chapter most enlightening.

I will admit that it is not entirely fair to review a research volume like this so soon after its publication. Ideally, the best way to assess such a work is to make a thorough examination of it first, then put it up on the shelf, and then see how many times it gets pulled back down in the next few years. I’m sure that many university music research libraries will purchase a copy of this book for their reference shelves. I am equally sure that undergraduate students—trying to beat a deadline for a term paper on Croatian jazz musicians—will pull this volume off the shelves from their library and cobble together enough pages of narrative to satisfy their professors. However, I doubt that many graduate students will find this book helpful at all, as there’s just not enough detail about most of the musicians. Perhaps one of the more enterprising of those students will decide to write their dissertation about European jazz history. If they further decide to transform that dissertation into a marketable book, then we might get the narrative study of European jazz that Equinox’s book could have been.