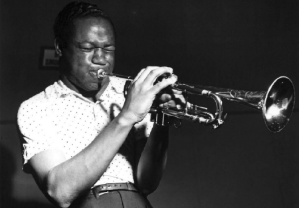 Al Hood (R. below)  is one of the world’s foremost experts on Clifford Brown (L.). He was a researcher for Nick Catalano’s biography “Clifford Brown: The Life and Art of the Legendary Jazz Trumpeter” (Oxford), and is presently writing his own book on Brown’s music and legacy. He also contributed to Don Glanden’s documentary, “Brownie Speaks”, and published articles on Brown in the Jazz Educators Journal and the Jazz Trumpet Journal. As Professor of Trumpet at the University of Denver, he has hosted seminars on Brown’s music and life. Along with fellow trumpeters Brad Goode, Terell Stafford and Greg Gisbert, he will present the first annual Clifford Brown Jazz Trumpet Consortium in Wilmington, Delaware from June 15-18, 2015. Thomas Cunniffe spoke with Hood about Brown and the upcoming event.

Thomas Cunniffe: You and I share a deep love of Clifford Brown’s work. For the benefit of those unfamiliar with Brownie, could you give a brief thumbnail history of his life?

Al Hood: In my opinion, Clifford Brown belongs in the pantheon of great jazz trumpeters, including Louis Armstrong, Roy Eldridge, Dizzy Gillespie, Fats Navarro and Miles Davis. He was born in 1930 to a middle-class black family in Wilmington, Delaware. He went to Howard High School, which was one of the most important black American secondary schools. He was a math wizard, and when he was twelve, he took up the trumpet with the encouragement of his father. Clifford studied with Robert “Boysie” Lowery, who taught him the basics of modern jazz and improvisation. The neighbors said he practiced all day. After high school, Clifford started playing professionally in Wilmington and Philadelphia. While he was in college, he was in a terrible automobile accident which put him in a body cast for the better part of a year. While he recuperated at home, he became much more serious about music. Since he couldn’t play his trumpet, he practiced piano, studied music theory and started writing his own compositions. When he was able to play the trumpet again, he practiced endlessly and actually played a few gigs while still on crutches! He played with Charlie Parker during this period, who was quite impressed with the young musician. Brown joined a rhythm and blues group led by Chris Powell, and he made his first commercial recordings with that group in 1952. Many musicians told me that they first heard Brownie with the Powell band. In the summer of 1953, he made recordings with Lou Donaldson and J.J. Johnson, and at the Johnson date, Blue Note signed Brown as a leader. After a short summer gig with Tadd Dameron, Clifford made his first album as a leader, and then took off for Europe with the Lionel Hampton band. He made several recordings while there, and since Hampton didn’t approve of his sidemen recording on their own, most of the band (including Clifford) was fired when they returned to New York! Next, Clifford played with Art Blakey, recording the famous “A Night at Birdland” LPs for Blue Note, and then Clifford got a call from another drummer, Max Roach, who asked him to come to Southern California to co-lead a new quintet. That band worked together for just over two years, and the albums they recorded together did more to cement Clifford’s legacy than any other group. Clifford was loved by his fellow musicians. He abstained from smoking, drinking and hard drugs, and was known as a very warm human being. He was married and had a child who was born about six months before Clifford died in another automobile accident (which was not his fault). He was only 25 years old when h 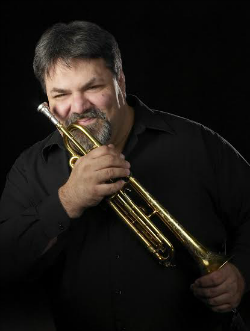 TC: Where did you first hear Clifford? What impressed you about his music?

AH: I think it was “Clifford Brown with Strings”. My high school teacher gave me a couple of albums, which also included Lee Morgan and a few others. Then I started buying as many Clifford Brown LPs as I could find. Clifford was so melodic on those albums, and was a wellspring of great ideas. And as great as his improvised melodies were, they all lined up harmonically. Clifford’s widow, LaRue, told me that he could analyze the mathematical precision in Bach pieces, and the transcriptions show that he could improvise in the same way. That’s where all the practice came in!

TC: Tell me about the research you’ve done into Brown’s life and music.

AH: When I was working on my Master’s degree, I had to do a biographical project, and I decided to study Clifford’s music. I got in touch with LaRue, and she gave me a number of other contacts, including Robert Lowery. I also talked to some of Clifford’s family. The article was eventually published in IAJE’s Jazz Education Journal. Every time I visited Wilmington, I’d meet more of Clifford’s friends and colleagues. This was about the same time that Don Glanden started working on his Clifford Brown documentary, so Don and I worked hand-in-hand on the research. When I was a graduate student at the University of Miami, Nick Catalano moved to Florida, and basically wrote his Clifford biography there. Since Clifford was the subject of my doctoral thesis. Nick and I consulted each other regarding the research. I’m writing my own book on Clifford now, and I plan to include much more about Clifford’s music and his trumpet technique.

TC: Clifford is obviously a major influence on you, but you’re certainly not a Clifford copycat. How does Clifford Brown—as both musician and as a person—inform your work as a trumpeter and teacher?

AH: I think his melodicism had the biggest influence on my playing. There are so many young players who either play “by lick” or entirely by music theory, and I think those players miss Clifford’s concepts of storytelling, melodicism and logic. I try to employ those aspects when I play. I don’t try to copy his ideas, but I do think about his sound. Clifford could manipulate his sound so well, and because there is only one film of him (which is not terribly clear), we have to guess about the way he interfaced with his instrument. Photos of him show how much of his lips were inside the mouthpiece, but we can’t really tell the shape of the inside of his mouth when he played, nor the way he blew air through the instrument.

TC: I expect that subjects like this will come up during your upcoming Clifford Brown Jazz Trumpet Consortium. Is this event primarily for trumpeters, or can anyone join?

AH: Currently, the event is only for trumpet players. Most of the four days will be spent in hands-on trumpet and jazz training. There will also be some history: we’ll screen Don Glanden’s documentary, and we’ll tour Clifford’s hometown neighborhood. My friend and colleague, Dave Hanson, has written an arrangement of “I Remember Clifford”, which we’ll play at Clifford’s gravesite. I had wanted to present this symposium at Howard High, but we’re actually at the Christina Center for the Cultural Arts, which has a Clifford Brown Performance Space on the second floor. We have several guests, including Don Glanden and Clifford’s son, Clifford Brown, Jr. This event is also happening in conjunction with the DuPont Clifford Brown Jazz Festival, and the members of the consortium have been invited to play at the festival on Tuesday night. In addition, we’ll present our own concert at the Christina Center on Thursday. There are currently 27 trumpeters signed up, and we are willing to add more. We will have day visitor passes for anyone who wants to observe, take the tour and/or meet Clifford Brown, Jr. We also have a Kickstarter campaign to raise money for our scholarship program.

TC: This sounds like a wonderful tribute to Brownie’s music. Hopefully it will become an annual event. Best of luck!

AH: We do plan on it being annual!  Thanks for your support.