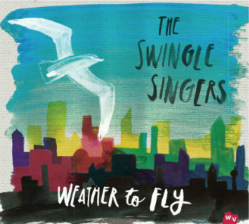 Although the first recordings of the Swingle Singers were made in December 1962, the group has made 2013 their official golden anniversary year. As it turns out, the celebration will continue even further as the release of the highly-anticipated 50th anniversary CD has been delayed until the spring of 2014. With that album slated to include many new arrangements, the Swingles’ current release “Weather To Fly” brings the group’s fans up to date with recordings of favorite pieces from the current concert repertoire.

“Weather To Fly” is a transitional album. Four of the thirteen tracks feature the group’s former bass, Tobias Hug, while the rest have Hug’s replacement, Edward Randell. On this album, Randell only sings in the ensemble. (Randell has written a few lovely originals for the group, which have turned up in concerts and broadcast performances; their absence here makes me think that we’ll hear them on the 50th anniversary album). The group has also included three tracks that were previously issued as singles or on the Swingles’ own label. The emotionally overwhelming “Poor Wayfaring Stranger” was a collaboration with American vocalist Peter Hollens, and is included here as a bonus track. Clare Wheeler’s “Fugue For Autumn” and Jo Goldsmith-Eteson’s “Hiding Your Smile” (aka “Song For Winter”) are reissues from the Swingles’ previous release “Yule Songs“, and while the works segued into one another on the original recording, they are presented separately in concert and on this CD.

Three other pieces have previously appeared on Swingle albums, but are presented here in new recordings and adapted arrangements. Scott Stroman‘s arrangement of “Spain” now starts with Chick Corea‘s melody, and eliminates the references to Rodrigo’s “Concierto de Aranjuez”. This allows more room for Wheeler’s fine extended scat solo (a highlight of the Swingles live concerts for the past few years). Carol Canning‘s chart of “Lady Madonna” has been in the Swingles’ book for at least two decades, and the group regularly uses the piece as a vehicle when performing with a guest choir. For this recording, the Swingles overdubbed the additional parts and added a brief recurring spoken part and a few audio effects. Kineret Erez‘ powerful setting of Astor Piazzolla‘s “Libertango” has lost its atmospheric introduction, but retains the tabla-esque bass part (expertly sung by Randell), the perfectly modulated duet of Sara Brimer and Oliver Griffiths, and the super-human high notes of Brimer and Goldsmith-Eteson. However, this piece is over much too quickly, and it might benefit from an additional chorus or two.

The rest of the album includes Wheeler’s evocative arrangement of the title track (which moves the vocal percussion part across the entire group), Kevin Fox’s stunning version of the traditional Turkish melody, “Gemiler Giresune”, and Goldsmith-Eteson’s fine arrangement of Manuel De Falla‘s “Nana” (with an unforgettable vocal introduction by the women and a few explosive effects by the men). Wheeler also contributed the mash-up of Florence and the Machine’s “Shake It Out” and Saint-Saens‘ “Danse Macabre”.  Beyonce’s “Single Ladies (Put A Ring On It)”, here re-christened “Swingle Ladies” and presented in a sassy arrangement, works well in its audio-only version, although I’m sure that Swingle fans will recall the group’s choreography while listening to the track. And while Brimer’s send-up of Donizetti‘s “Lucia di Lammermoor” is well-sung here, it really needs Brimer’s hilarious facial expressions and Christopher Jay’s elaborate spoken introduction to get the point across.

Vocally, the Swingle Singers are in peak form, and the wide range of material on this album displays their mastery of several genres. They’ve promised some new musical directions for the 50th anniversary album, so it’s good to have these current pieces recorded. While the album is easily available online, I suspect that many copies will be sold at Swingle Singers concerts. “Weather To Fly” certainly fills the promise of an audio memento of the current Swingle repertoire, and it documents the group’s current approach as they continue to explore new ideas.