The Singer Within the Band

What constitutes a vocal jazz album? The answer might seem obvious at first glance: an album led by a singer which typically includes several standards and an original composition or two. The opposite would be an album led by an instrumentalist containing original works, using a vocalist singing without words as an additional horn. The two albums under review here do not fit into either category: each album includes songs from other composers (only one of the half-dozen examples from these two CDs actually qualifies as a standard) and the featured vocalists sing lyrics, even though they are considered part of the ensemble rather than spotlighted vocalists. The promotional sheet for John Hébert‘s CD states that the record “isn’t necessarily a vocal jazz album”, and the blurb for Mike Holober’s disc says that the album “will not be heard as a singer’s showcase.” If that’s the case, in which category do these albums fall?

The opening track of bassist John Hébert’s “Rambling Confessions” (Sunnyside 1413) certainly doesn’t sound like a typical vocal record. Billy Drummond sets the pace with his cymbals, and then Jen Shyu enters with a free improvisation that sounds like it’s sung in an Asian tongue. After Hébert enters, Shyu segues into 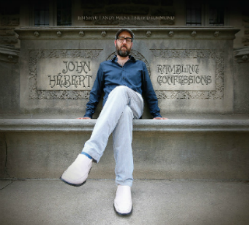 Kurt Weill’s “September Song” sung rubato over the surging rhythm. The dual tempos and the searing vocal remind me more of Ornette Coleman’s “Lonely Woman” than any other version of the Weill song. On the surface, the group’s version of Cat Power’s “Fool” seems more traditional, with Shyu basically performing a duet with Hébert, while pianist Andy Milne and Drummond provide occasional commentary. Yet the stark reading of the lyrics, the flexible tempo and the unresolved ending are further testaments to the unique musical vision of this quartet. On Hébert’s originals, “When You Love”, “Rodger’s Lodge” and “Media Luna”, Shyu floats over the ensemble with lines which alternate between scat and lyrics. She keeps her diction vague so that we never know when she moves into words, and when that happens, we don’t always know what she is singing about. Shyu’s expressionist and wide-ranging improvisations are quite impressive from a technical standpoint, but she rarely tries to touch the listener’s heart. The exception is “Alfie”, where she phrases with the lyric and limits her variations on the Burt Bacharach melody. While Shyu certainly retains her unique identity on this track, her more traditional approach to this song may be connected to the quartet’s original focus, which was a tribute to Carmen McRae. Throughout the album, Milne, Hébert and Drummond maintain a remarkable musical interplay, but because Shyu is a primary improviser on all of the tracks, our attention inevitably moves in her direction whenever she sings.

The voice of Kate McGarry starts pianist Mike Holober’s album “Balancing Act” (Palmetto 22058) with a scat phrase, but after a passage by the horns, McGarry embarks on Holober’s lyrics and music on “Book of Sighs”. At this point, it sounds like something from one of McGarry’s albums. But before Dick Oatts takes over for an alto solo (later joined by trombonist Mark Patterson) McGarry wordlessly leads the horns in 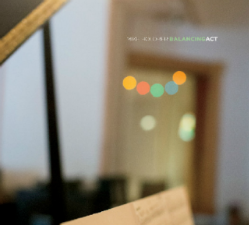 an introductory figure. And to close the solo section, McGarry again takes the primary voice of the ensemble before returning to the lyrics. On the next track, “Idris”, the focus moves toward the instrumentalists. McGarry sings one of the parts in the ensemble (but significantly, not the lead part) and the performance centers on brilliant solos by tenor saxophonist/composer Jason Rigby, pianist/arranger Holober and drummer Brian Blade.  While we might expect lyrics on the arrangement of a Billy Joel song, McGarry remains a wordless voice in the ensemble until the last minute of the track, when the words suddenly appear. On “Grace at Sea”, Holober alternates McGarry’s appearances—again with Holober’s lyrics—with passages by the horns. Midway through the track, she returns for another chorus of the song, but this also acts as a framing device for both the Patterson trombone solo that preceded it and the Rigby tenor solo that follows it. And as if to clarify McGarry’s central role in this piece, she sings a brilliant dual improvisation with Rigby near the track’s conclusion. As on Hébert’s album, the fifth track takes us back to the 1960s, this time on the Janis Joplin classic, “Piece of My Heart”, and like “Alfie”, this cut is a little more traditional in approach than the rest of the album. McGarry delivers the song with intense passion, and offers commentary against Marvin Stamm’s trumpet solo (It should be noted that Hébert is the bassist on this album as well. Since he recorded his album with Shyu about three years before making this disc with Holober, I wonder if he suggested this change of pace.) From here out, the album retraces its steps as in a palindrome: “Canyon” uses McGarry’s appearances as bridge passages, “Sighs Matter” finds her as a wordless presence in the ensemble passages, and “When There Were Trains” offers a fairly conventional approach to another of Holober’s fine original songs (this time without McGarry leading the horns).

A former roommate of mine used to drive me crazy when he referred to “Blue Train” as “a great Lee Morgan album”. I would always remind him that the album was led by John Coltrane, who clearly envisioned the album’s scope and direction. But since my roommate was a trumpet player with an abiding love for bop recorded in the 1950s, was he necessarily wrong? After all, he was transcribing Morgan’s solos from that album, which were some of his finest improvisations of the period. Similarly, the artistic focus on the two albums above came from their leaders, John Hébert and Mike Holober. But do the albums still qualify in some way as vocal albums even though the singers are technically sidepersons? As Dewey Redman’s album title said, the answer may be in “the Ear of the Behearer”.